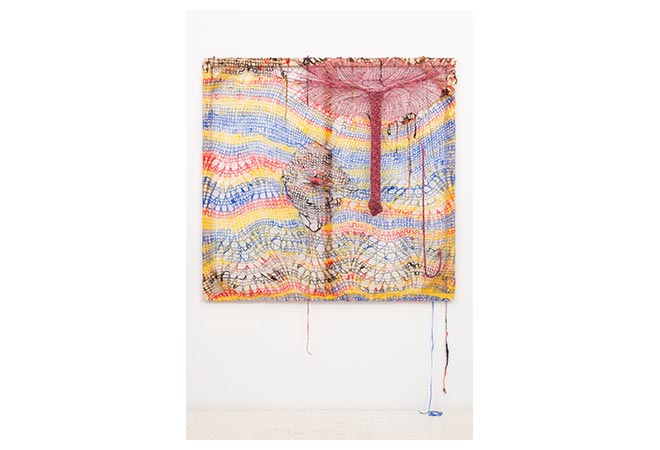 Los Angeles artist Channing Hansen is a self-described “armchair physicist” whose Quantum Paintings riff on the two-dimensional medium. Though they occupy wall space the way classicaly flat paintings do, these pieces are literally knitted together from fibers hand-dyed and spun by Hansen. Their frames aren’t boundaries as much as portals offering viewers a visual entrée into mesmerizing, textured realms.

Like the other works in this series, “Polytope Soap” was created using what Hansen calls “a computer algorithm based on the firing of a single photon atom, which basically takes my subjectivity out of the equation and tells me what to do—including the mistakes.” Although polytopes (geometric objects with flat sides) are often symmetrical, “Polytope Soap” and its companion works are irregular in shape and pattern. Enmeshed just off-center in the composition is a small cedar wood carving, the “three-dimensional shadow of a four-dimensional box” in Hansen’s conception.

Hansen is one of 35 participating artists in Made in L.A. 2014, the Hammer Museum’s second biennial featuring work by “emerging and under-recognized artists” in Los Angeles. Organized by the Hammer’s own Connie Butler and independent curator Michael Ned Holte, the sprawling show takes up the entire museum, even displacing its permanent collection, until September 7.

Asserting no unified theme or aesthetic agenda, Made in L.A. 2014 showcases a diverse sampling of artistic styles that attest to the vitality and innovation of the region’s contemporary art. Though Hansen (grandson of Fluxus artist Al Hansen and brother of musician Beck) avoids any suggestion that his work is inspired by or representative of Los Angeles per se, he touts the city as a great place for artists and affirms that he was “made in L.A” himself.

Other artists in the show have come here from countries around the world. “Part of the beauty and double bind of the art community in Los Angeles,” Butler suggests in the exhibition catalog, “is the tension between its intense localism and its international ambitions. Practicing in this city means coming to terms with its status as a megalopolis with a regional art scene.”