Home L.A. Home Chairside with the Father of L.A. Architecture 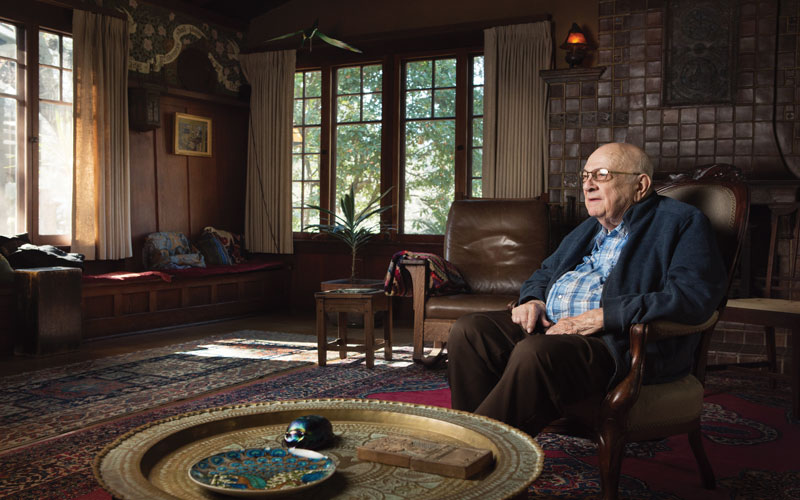 Courtly and spruce in blue plaid shirt and (almost) matching fleece, the architectural historian Robert Winter welcomes you into the living room of his home. Leaning on a wheeled walker, the guru of Southern California’s built history is 92. Old friends who haven’t seen him in years will cautiously ask whether Bob Winter is “all there,” and he is. As with the city that once became his muse, he’s just having a little trouble with mobility.

Back when “Los Angeles history” was a joke and not a major, Winter and his late friend David Gebhard wore out several sets of whitewalls researching their softcover gazetteer, 1965’s immortal A Guide to Architecture in Southern California. Ever since, the book has proved an essential reference for anyone in search of all the architectural treasures that bejewel L.A.’s rumpled topography. With help from local stair-walking evangelist Robert Inman, quite literally his legman, Winter is working toward the guide’s first online edition these days while also lobbying publishers for a sixth print iteration.

His house earned its own entry in the book decades ago. Lamplit, burnished, a deep woody brown inside, this nonpareil Craftsman bungalow perches across from the Arroyo in Pasadena, where the great tile maker Ernest Batchelder designed and built it in 1910 for his family. Winter has recently curated a smart exhibition around Batchelder’s work for the Pasadena Museum of History—on view through March 12—but exhibit A in the artisan’s matchless legacy remains this house. Entering it is like stepping into warm chocolate.

Winter’s love of Los Angeles architecture didn’t vanish with the doughty days of Old Pasadena. “I’m a modernist,” he declares—not surprising from someone whose respect for “clean lines” extends beyond favorites like Craig Ellwood’s Kubly House to his own clear, planed prose. To Winter modernism simply means an unfaltering interest in the new. If he could visit one L.A. structure that the indignities of age have kept him from eyeing except in pictures, it would be the Grand Arts high school, a sleek, silvery jumble across from the Cathedral of Our Lady of the Angels downtown, with that spiral chute around its campanile. “It’s wild,” he says. “I’d love to see that! It’s just the right place. It’s fantastic.”

Born in Elkhart, Indiana, Winter first rolled through Southern California on a troop train during World War II. He found L.A. a vast, “ghastly place.” A few years later, after studying Herman Melville back at Dartmouth, he tested the academic job market in intellectual history (“We don’t mention ‘intellectual’ anymore. It’s ‘cultural’ now,” he says) and fetched up at UCLA, feeling like “a missionary to the heathen.” A professor told him, “It’ll take you two years and you’ll become a cultural addict for Los Angeles.” Winter pauses for effect, still the consummate lecturer. “It took me four.”

Finally gone native, he discovered in L.A. “a sense of freedom that was so different from the uptightness of the east.” Winter joined the Occidental faculty, where he wound up mentoring a generation of indispensable Los Angelists, including L.A. Times columnist Patt Morrison and Esotouric’s Richard Schave. Winter and Gebhard started researching what used to be called a vade mecum—their “go with me” book, which became the perennial vehicular companion to half the jerky drivers who’ve ever stopped and started inexplicably in front of you. L.A. mavens today use Waze and Google Maps instead of the Thomas Guide to locate their landmarks, but they still get the addresses out of Winter’s durable gift to us. Asked what his advice would be to all those students scrivening away in institutes dedicated to Los Angeles, their spiritual godfather has but one eminently sensible injunction: “Use the guide.”