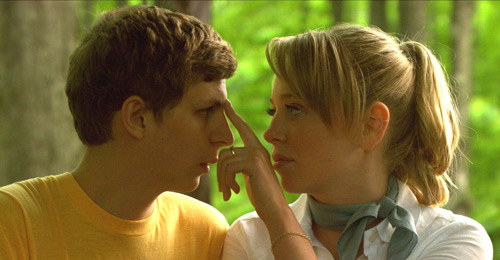 Michael Cera’s new film, Youth in Revolt, brought hipsters out in droves on Tuesday night to Flux’s monthly Cinema Tuesdays screening at Nike Sportwear at the Montalbán Theatre in Hollywood. With Red Bull, bottled water and Belvedere cocktails on hand, as well as a DJ pre-screening, things got off to a good start. The audience of twenty- and thirty-somethings snacked on popcorn and chatted about dive bars, Facebook, and cute boys while waiting for the film to start.

Youth in Revolt is clever; some parts downright hilarious. Director Miguel Arteta (The Good Girl) makes the most of his great cast, which includes Steve Buscemi and Ray Liotta, in this adaptation of C.D. Payne’s novel, but it’s Cera’s signature comedy that elevates the boy-meets-girl story. He plays Nick Twisp, a teenager more interested in Sinatra and Fellini than football who has an alter ego named Francois Dillinger. He’s unpopular at school and miserable at home until he meets Sheeni Saunders (Portia Doubleday) while on vacation at a lakeside trailer park with his mom and her deadbeat live-in boyfriend, Jerry (Zach Galifianakis). Sheeni’s different than the girls who ignore Twisp at school—she likes French films and has a record collection—and the two become fast friends (he’s in love from the moment he sees her). When he has to return home earlier than expected, he comes up with a slew of “what if” possibilities for them to stay together. Adventures ensue, Dillinger (also played by Cera) comes out to play, and hilarity takes off. A scene at the breakfast table with Dillinger smoking and being rude to his mother and her new acquaintance, Officer Lance Wescott (Liotta)—an attempt to piss of his mother so he can live with his father (Buscemi) and be closer to Sheeni—is particularly funny. Dillinger wears crisp white pants, loafers, aviator sunglasses and calls Twisp out on his wimpy ways. If he wants Sheeni, he reasons, he will have to follow his alter ego’s lead, even when that means breaking the law, damaging property, and lying.

With suspense throughout, plenty of humor (I missed a couple of lines because the audience was laughing so loud), and a really cute love story as its base, Youth in Revolt is sure to find an audience. I won’t ruin the ending, but it’s true that at the end of the day, nothing feels better than being yourself—no matter how cool your alter ego.