Home Celebrity A Los Feliz Dry Cleaner Walks Us Through His Collection of Celebrity... 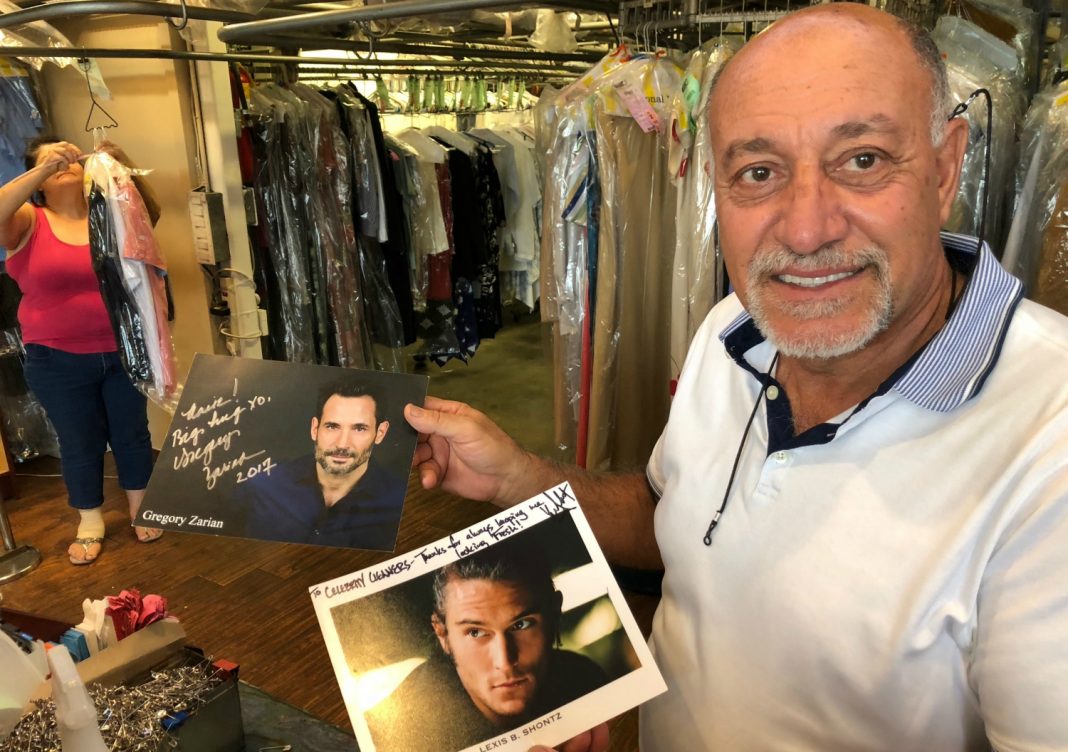 In our Strip Mall of the Month feature, writer Rico Gagliano picks a random L.A. shopping plaza and reports back on the hidden treasures found therein.

Autographed celebrity photos are an interior-decor standby at L.A.’s dry cleaners. Typically what you’ll find is a smattering of character actors, recognizable mainly to viewers of soap operas, along with an A-lister or two. Once, at a Mid-City cleaners, I noticed Arnold Schwarzenegger’s signed photo over in a corner next to some local TV news reporter’s. The joint down the street from my apartment has a rakish-looking John Cho stapled to the wood paneling over the counter, along with a half-dozen lesser-known faces.

I find these displays poignant and beautiful—the humble, everyman version of the Hollywood Walk of Fame. Anyone with a headshot and some acting credits can end up beside a star.

The proprietors of Celebrity Cleaners, located in a strip mall on Hillhurst Avenue in Los Feliz, are among the kings of the practice. For years their display of dozens of autographed headshots blanketed an entire wall of the store. When they remodeled three years ago, management took the game into the computer age by digitizing the entire collection and displaying it on a flatscreen TV in a continuously looping slideshow. Faces, both familiar and obscure, crossfade silently, one into the other.

Recently, I stopped in to speak with the shop’s genial owner and manager, George Afifi. “I don’t have a favorite photo,” he told me at one point. “They’re my customers. I treat them the same way, whether they’re celebrities or not. Every customer, for me, is a celebrity.”

So first of all, how many autographs do you have, total?

Close to a hundred.

And are all of those from actual clients?

Do you ask them for their autographs or do they just give them to you?

Ninety percent of the time I ask them, because I recognize them. Some of them, after a few times coming, they introduce themselves. Or one of my other customers says, “Oh! This is that person,” you know? So I ask for a picture, and then they bring it the next time they come in.

Who was the first one, do you remember?

Is that when you started this place?

Yes. My wife started this business. Then I started helping her. Now she’s retired and I’m doing the whole job now.

And you get to meet all the cool famous people.

Yes, yes, yes! She started collecting the pictures, but now I do it.

Which is the most famous autograph you have, do you think?

When did you get Tim…whoa, did I just see a photo of Rob Reiner?

I guess that was back when he was doing the miniseries It on TV.*

What did Tim Curry bring in to get dry cleaned?

[Laughs] Ah—everything! Whatever he wears.

I just imagine him having makeup on his collars a lot, ‘cause I think of him from Rocky Horror and as the clown in It.

Sometimes he might have, yeah. That’s why people bring their clothes here; because we’re good and we can get makeup out. [Looking up at the screen]Oh—there’s Barry! From the show Storage.

Oh yeah! Barry [Weiss], the guy with the glasses from Storage Wars.

Yes. I have his picture but I didn’t put it on the video yet.

And there’s you standing with somebody.

That’s me with Avo, the big cigar guy.

I don’t know who that is.

He was a cigar distributor.

[Unimpressed] Oh.*** You have several shots with the guy who played “Big Pussy” on The Sopranos [Vincent Pastore].

He comes in here?

Uh, no—I met him in Las Vegas, I think. That’s why I said mostly the pictures are of clients! The others are like that, where maybe I met them in Vegas during a dry cleaning trade show, or other trade shows I go to.

Big Pussy was at a dry cleaning trade show?

No, I was there for the show, and he happened to be at the hotel. He was playing blackjack at some table. I went up to him, we start talking, we played. My wife, she was there, and the picture is me, my wife, and him. I got Sherman Hemsley’s photo at a trade show, though.

Sherman Hemsley from The Jeffersons! His character George was a dry cleaner, right?

Yeah. That was at a show in Vegas or New Orleans, I’m not sure. [Laughs] He was a guest of the dry cleaning show! Every two years comes a big show in New Orleans, Vegas, or New York. And usually I go to see new equipment, new machines, meet new people. And I met him over there.

Was he a speaker, or just there signing photos?

For fun he was there, just signing pictures.

I see Paul Lynde up there, from Hollywood Squares. He was a client?

Did he have his print shirts cleaned here? I remember him having amazing shirts on that show. If you cleaned those that’s like handling a piece of history.

I think so. If he was wearing it, then we cleaned it.

They would have been brightly colored.

Yeah, Oprah, but she doesn’t come here. The guy standing next to Oprah—he was a customer.

Is that her husband or her friend, or…?

Friend, maybe. I guess. [Laughs] One of the famous guys who hang around Hollywood people—I don’t know! He brought that to me.

These photos used to be physically on the wall, right?

Yes. But now everything is digital. Because after 30 years of hanging on the wall, the pictures were getting faded. The color was changing, the frames were getting broken from the sun, from the heat. Even the signatures were starting to get faded. We decided, “In another ten years”—and I am gonna be here in another ten years—“These photos, you’re not gonna be able to see anything!” This way, at least, everything stays fresh.

Oh there’s Max Perlich, the character actor! I loved him in Drugstore Cowboy.

And there’s Paul, the standup comedian! Paul…uh…I can’t remember some of the last names, or some of the first names! [Gestures to screen] There’s Cynthia McFadden. She used to work on ABC, I believe. She was here during the O.J. Simpson trial, covering from the courtroom. She used to come here. But after, she moved to New York. She’s there now.

She hosted Nightline for a while. Did you talk to her about the O.J. trial, while it was happening?

You didn’t care? Everybody cared!

Not me. You know, you don’t discuss politics with the customers—that’s the number one rule. My father taught me: don’t be involved with the politics. Not with your friends, with your brother, even. No politics.

If you could get one celebrity to add their photo to your collection, who do you wish it would be?

I think he lives up north.

Maybe he’ll read this and come down with a suit or something.

*** After the interview, a quick internet search revealed “Avo” to be the late Lebanese-born jazz pianist and entrepreneur Avo Uvezian. Who not only sold the distribution rights to his Avo-brand cigars to Davidoff for an estimated $10 million bucks, but also claimed he wrote the original music to the Sinatra hit “Strangers In the Night.” There’s a lot of history to be found on a dry cleaner’s wall. Or video screen.