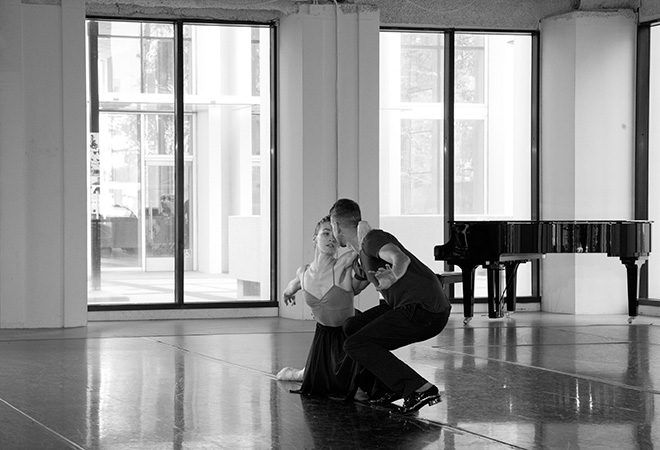 Fred Astaire moved like butter and partnered like a pro. On Saturday, April 5 and Sunday, April 6, American Contemporary Ballet pays tribute to the Hollywood star, who appeared in dozens of films beginning in the 1930s. For part two of the program DANCE+DESIGN 2014: The Best in a Century (part one showcased George Balanchine), ACB artistic director Lincoln Jones will create an intimate, salon-like atmosphere and give the audience a crash course in Astaire’s choreography.

He’ll focus on two pieces: I’m Old Fashioned, from the 1942 film You Were Never Lovelier, and Dancing in the Dark, from 1953’s The Band Wagon. The first costarred Rita Hayworth, who had a ballroom background; the second, Cyd Charisse, who had ballet training. Here Zsolt Banki performs the role of Astaire, partnering with Cleo Magill for I’m Old Fashioned and Theresa Farrell for Dancing in the Dark. Imagine the silver screen come to life—and you’re getting the inside scoop. Plus there’s live music and a reception afterward with the artists. We spoke with Jones and Farrell, who is also the company’s associate director, about Astaire’s genius.

Why did you decide to feature Fred Astaire for this program?
Lincoln Jones: Our DANCE+DESIGN series is intended to help our audience deepen their knowledge of music and dance. For me, Astaire stands next to George Balanchine as the greatest choreographer of the 20th century (Balanchine compared Astaire’s inventiveness to Bach’s). So presenting Astaire’s work is one of the best ways for our audience to learn. It’s one of the most important ways that I learn and develop as a choreographer. Performing these dances is also a great way for the dancers to improve. Ballet dancers can get so overwhelmed with the technical demands of the choreography that musical concerns can get lost. Working with dances that are not technically challenging, but that set the musical bar at its absolute maximum, is a great opportunity for them.

What are the mood and tempo like for each piece?
LJ: They are both masterpieces, among the best he created. They are also very interesting to watch together, because they demonstrate, through a contrast, Astaire’s choreographic adaptability. In Dancing in the Dark, his partner is Cyd Charisse, who was a former dancer with the Ballet Russe de Monte Carlo, and that dance is very ballet inspired (this is also due to the plot of the film The Band Wagon). On the other hand, Rita Hayworth, his partner in I’m Old Fashioned, was a trained ballroom dancer, and so he used that vocabulary as the basis of the number.

Both dances are absolutely sublime. Dancing in the Dark is slower, and it builds from syncopated hesitations into daring lifts, representing the development of the relationship of the two characters in the film. I’m Old Fashioned moves from a smooth, intimate ballroom dance into an upbeat, tap-dance-inspired finale and features some of the most joyous dance rhythms I’ve ever seen. I think both are among the greatest expressions of romantic love in the artistic canon.

What can the audience expect from you in terms of explanation and demonstration?
LJ: Astaire worked in a popular medium, but he was creating dance on the highest level. I’m going to be walking the audience through both of these numbers, using the dancers and musicians to demonstrate along the way, showing the audience instances of Astaire’s genius in dance making, including how he advanced the plot through his dances yet maintained a poetic and formal beauty that allows them to stand alone as works of art. I’ll definitely be giving some background on Astaire, which is fascinating. The result of his screen test at RKO was allegedly “Can’t act. Slightly bald. Also dances.” As for demonstrations, I’m not sure yet, but I always end up needing to use the audience to demonstrate one thing or another!

From a dancer’s perspective, were there any particular challenges in preparing for Dancing in the Dark?
Theresa Farrell: It was extremely challenging! Astaire’s partners all seem to take on something of his smoothness and musicality when they dance with him. Add to that Cyd Charisse’s natural grace and stunning figure, and you’ve got quite a combination to live up to. Really, though, the challenge is a lot of the reason for doing it—to get better by reaching for a new quality. The really challenging thing here, though, is that there is literally nothing to hide behind. In ballet you are on your toes, spinning around, etc. This is just dance. If you aren’t musical, if there is a hole in your phrasing, it glares. I mainly prepare by trying a few phrases, and then getting a lot of corrections from Lincoln! He also has us work a lot with a metronome, because Astaire’s musicality was so precise. Then I watch my performance on video, compare it to the original, and try again!

How does it feel performing in the footsteps of the famous Cyd Charisse?
TF: From what I have seen, Charisse never danced better than she did with Astaire. She achieves a magical quality in this number that made me want to dance the piece the moment I saw it. Originally Lincoln had just planned to re-create I’m Old Fashioned for this show. When I found out he was going to do Dancing in the Dark as well, I was so excited. As for how I feel when I dance it, right now I’m mainly just noticing how far I still have to go to achieve the right qualities. But occasionally that goes away, and I kind of feel like I’m falling in love.