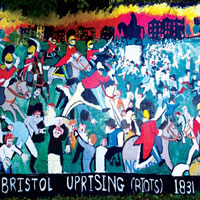 Few groups can imprint themselves in the collective conscience with a symbol. Prince had his Ankh. Zeppelin embraced four mystical emblems. Then there’s Beak>. The UK brainchild of Geoff Barrow (Portishead), Matt Williams (Team Brick), and Billy Fuller (Fuzz Against Junk), their second album “> >” is a swirling amalgam of droning vocals, doom-laden fuzz guitar, free-form synth, and tightly wound percussion. The group, which rumbled the Echoplex in February with a mix of ’70s progressive rock and Sergio Leone-esque soundscapes, will release two 10″ vinyl tracks on April 20. How better to celebrate Record Store Day.

How’d you guys meet?
Geoff Barrow: Through Invada Records. Our partner, Fat Paul from Bristol – a legend of a promoter – put our music [from other projects] on in his bar.

Billy Fuller: He’d put on Matt’s solo project Team Brick and my band Fuzz Against Junk. We were both putting out stuff on Invada. It was Christmastime, and the label put on a party with instruments set up so all the artists could sort of get up and have a jam. That’s where we first played together.

Geoff Barrow: Then I said, “Should we do this again in the studio?” We didn’t really know each other beyond saying “Hello,” so when we got in the studio, we didn’t say much. We had a cup of tea and went straight into making music. The first track we played together became the first track on the first album. And that was that.

The name – where’d “Beak” come from?
Billy Fuller: I just came up with it when we were looking for a name. I liked the word “beak.” I thought it was a good word.

Geoff Barrow: We’ve had lots of simple decision making. If things come easy, we say, “Right. Well, that’s it, then.” And the symbol “>” right after it we chose because it looks like a beak.

You’ve all had independent success in the different things that you’ve done. What creative satisfaction has this sort of project brought to you?
Matt Williams: I normally play music by myself. That’s always been my process. But for this project, I’m playing with other people, which is kind of a new, exciting thing for me. I don’t get to do that very often. I’m quite open — free method of composition is right up my alley, anyway.

Geoff Barrow: This is my first experience with an instantly creative process. Nothing I’ve done before has been instant. Coming from an electronic, sample-based thing, there’s no way that can be instant. There’s a process to go with it. You’re not hearing it until you’ve produced it. I was never really a musician, as such. I was always more of a producer. Now, I’m a musician. I feel like I’m sixteen again. I’m back to playing the drums when I was a kid. For me, that’s ultimately happiness.

Billy Fuller: Making music in the past, for me, has been multi-layered stuff – a lot of decision and thought goes into it. I’ve never been in a band where we take so much advantage and make use of the happy accidents. When we stop thinking about it, that’s when it happens.

Music is instantly accessible to people these days. Do you think that’s a positive thing?
Matt Williams: I think it isn’t, at all. A lot of my favorite records I instantly reacted with complete negativity but because I shelled out fifteen pounds for the CD, I had to live with it. You get used to it. Eventually, you find things you really like about it; things get stuck in your head. When everything’s free and instant, everything’s instantly discardable.

Does that affect how you make and produce music?
Matt Williams: Personally, no. If I put something out on my own and 20 people like it, that’s good enough for me. I do want to encourage people to actually invest in an album and take time to listen to it and digest it. I understand that the music I make on my own you can’t just casually pop onto a playlist. It’s more attentive music, I guess.

Geoff Barrow: On the other hand, they say that albums don’t sell as well as singles do these days – a one-track market. If you think about the business, it’s kind of come full circle. You had the 45 RPM record and it was all about tracks; it wasn’t about LPs for a long time. You could write a track and convey a message with just one song. That’s sort of [similar] in the digital age. The only way I can describe it is like taking a child into a sweets shop and telling them they can have any sweet they want every day of their life. By the end of it, they’re not going to want sweets. They’re going to want spaghetti.

With so many choices, it’s hard to know what you want.
Geoff Barrow: That’s what I’ve seen. That’s why music doesn’t matter as much to some people. It’s difficult for younger people to wean themselves off that kind of consumption and slow everything down and go, “I’m going to [get music] off the Internet, but it’s going to come in the post.” The anticipation of it! Did it come today? It grows your appreciation of art. But, I think we’d all agree: If you’ve got something that good, it doesn’t matter how it’s delivered. If it’s good, it’s good. I don’t think anyone would squabble with how they receive it.