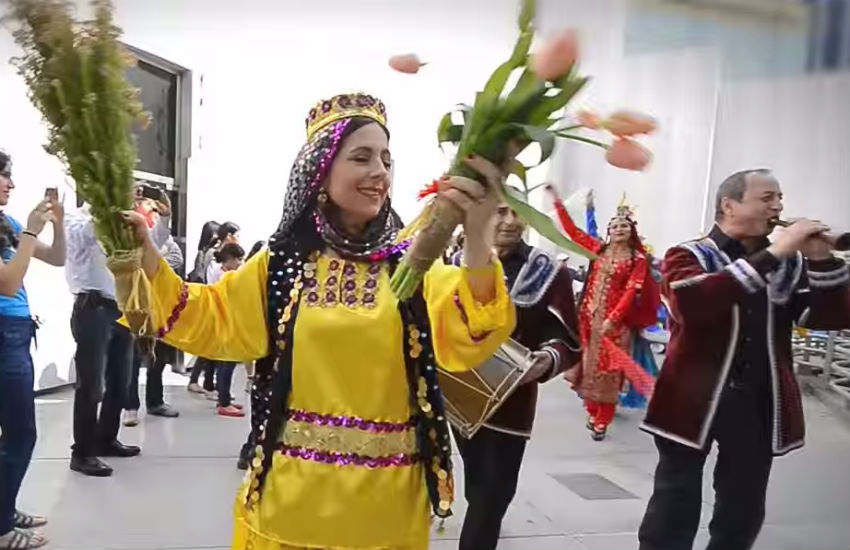 Following a successful event last year, the Los Angeles County Museum of Art and the Farhang Foundation are hosting a celebration for Nowruz, the Iranian New Year, this Sunday, March 22, on the LACMA campus. The word Nowruz (pronounced nou’ru:z) means “new day” and it marks the tipping point when the duration of day and night are the exact same. Starting Sunday at 11:30 a.m., the Nowruz celebration offers a wide selection of activities and performances and there’s something for everyone in the family to enjoy: storytelling, a costume parade, tiara making, a backgammon tournament, Persian-inspired foods, concerts with Iranian singer Zohreh Jooya and rockers Kiosk, as well as award-winning puppetry.

Since the early ’80s, the Iranian population in Los Angeles has grown to the point that Southern California now has the highest density of Iranians living in the United States. Hormoz Ameri, Chair of the Nowruz Committee and a trustee of the Farhang Foundation, was born in Iran but migrated to the U.S. when he was 15 years old. He explains, “Iranians, as students, have been coming to the U.S. to study and and then returning to Iran for many, many decades, but what really caused a large migration of Iranians to come to the U.S. was the 1979 Islamic revolution.” Ameri was ecstatic about the festival’s turnout last year and hopes for even more people this year. “Over the last 30 years, Iranians have been able to prosper in Los Angeles, to take advantage of what is available here, and I think this is the time for our community to give something back.”

The primary performance of the day will be The Sounds of a Persian Spring, a multimedia performance created by renowned singer Zohreh Jooya. The show starts at 1 p.m. and combines music, dance, poetry and theater to weave a sonic and visual interpretation of the annual transition into spring. This is one of the few events in the festival that requires a ticket, along with the museum’s art exhibitions themselves, but for twenty bucks audiences can experience Jooya’s uncanny ability to unify diverse musical cultures in a modern performance.

While attending the festivities make sure to enjoy LACMA’s permanent collection, Art of the Ancient Near East and the first major installation of their exhibition of contemporary art of the Middle East, Islamic Art Now, featuring work from Iran and the Arab world. These are rare opportunities in the U.S. today, as LACMA is the only American museum that both collects and exhibits the full range of Iran’s artistic heritage from the fourth millennia B.C. to the present. Tickets for the exhibits can be purchased on the LACMA website.

Details: 7th annual Iranian New Year Festival on Sunday, March 22 from 11:30 a.m. to 7:00 p.m. at the Los Angeles County Museum of Art campus. Tickets for The Sounds of a Persian Spring, performed in the Leo S. Bing Theater, are sold via the Farhang Foundation website.