Home comedy After 40 Years in Comedy, Catherine O’Hara Is Still One of Our... 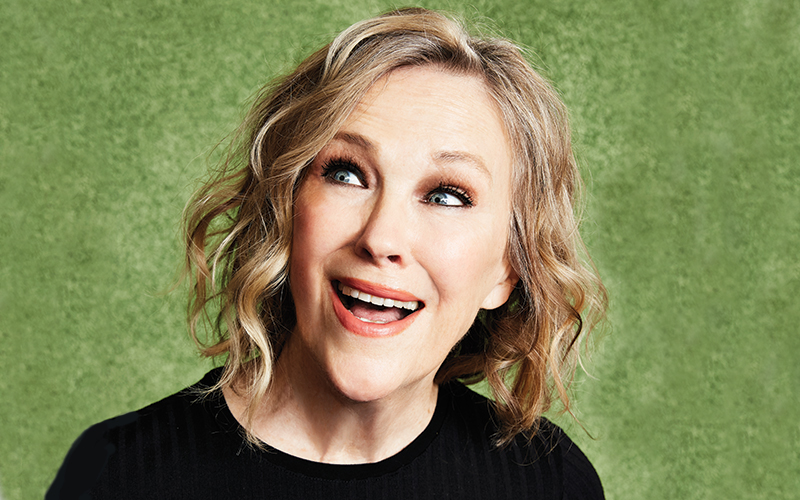 Tell Catherine O’Hara you think she’s a comedy legend and she’ll laugh in your face (or your ear, if you’re on the phone with her). The modesty is admirable, but there’s really no room for it.

Born in Toronto and based in L.A., the actress found household-name fame in the late ’70s and early ’80s by bringing a booze loving performer named Lola Heatherton to life on Canada’s Second City TV. Subsequent years yielded iconic roles in Tim Burton’s Beetlejuice, Home Alone, four of Christopher Guest’s exquisitely droll mockumentaries (fun fact: she taught herself to play the autoharp for her part in the folk band spoof A Mighty Wind), and a number of animated films (she voiced Sally in Burton’s The Nightmare Before Christmas).

In 2013, O’Hara returned to television for Schitt’s Creek, Pop TV’s dark-horse series created by her SCTV costar Eugene Levy and Levy’s son, Dan (season four premiered January 24). O’Hara plays Moira Rose, a former soap diva and the batty matriarch of a family that loses its fortune and moves into a motel in the show’s namesake town. Onscreen, O’Hara is all about her wig collection and Schitt’s Creek’s singing Jazzagals; here she gets real about Chance the Rapper and her fantasy comedy lineup.

Non-network-approved name for your soap opera?
Nine Lives to Live. Wait, I can’t do a cat reference—my husband’s allergic. So Ten Lives to Live. That makes no sense.

Three comedians, dead or alive, you’d draft for a dream sketch team?
I have to put—no wait. Ok. Anybody from Second City. That’s one. Oh, crappers. Jimmy Stewart. And who’s someone who’s really made me laugh in my life? Jim Carrey. Come on. That’s everyone’s dream list.

If SCTV’s Lola Heatherton had her own late-night show in L.A., who would be her first three guests?
Her drug dealer, her therapist who quit on her, and the person she owes the most money to. But she would claim they all have different talents. It would just be people she owed money to.

Rumors of a Beetlejuice sequel abound—Angeleno you’d haunt for a day?
My husband. Wait, what am I thinking?! My kids. I don’t know what they’re doing half the time.

An improvised musical of your life is opening at the Pantages. What’s the show-stopping number called?
“No Comments, Please!” It’s about someone being tricked into doing a musical.

Three former characters you’ve played that you’d choose to be stuck with in a motel, Schitt’s Creek-style?
Well I played Mother Teresa once—no I didn’t. Oh my gosh, I forgot. That’s scary. I’m drawn to playing characters who are terribly flawed and have no idea about it. You can’t lose playing stupid and cocky. So I don’t think I want to live with any of those stupid or cocky people—and most of them are bad mothers.

So you’re choosing none of yourself?
I won’t have it, I tell you.

Animated character you’ve voiced that you’d drop into an episode of Schitt’s Creek?
Weird Girl from Frankenweenie—the girl with the cat. She obviously had no friends and will claim anything to sound interesting, but she just isn’t. So I’d like to see her living in the motel. Weird Girl wouldn’t last.

Canadian-style poutine or L.A.-style tacos?
Tacos. There’s so much more variety there.

Is there one taco you could eat for the rest of your life?
Homemade!

You make your own?
Don’t you?

I don’t.
Well get with the times.

One musician you’d back on autoharp if you could?
If Chance the Rapper was on tour in L.A., I would try and play with him. I love him.

Dan Levy Dishes on the End of ‘Schitt’s Creek’