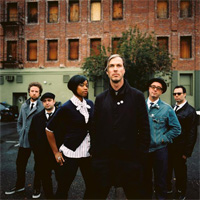 We caught up with Noelle Scaggs of L.A. indie-soul band Fitz and the Tantrums at KROQ’s 22nd Annual Weenie Roast to talk L.A. radio, finding inspiration in everything from Aretha Franklin to Rage Against the Machine, and her favorite local hangouts during those precious few weeks when she’s not touring.

You’ve been KROQ darlings for a while now.

We’ve had a lot of support from the station and it’s great for us because we’re locals. We all grew up on KROQ. It was a huge deal with our first record, with Cat Corbett playing “Moneygrabber” on her locals-only channel. Hearing that was a surreal thing. Then, when we went into this record [More Than Just A Dream], they were the first radio station to play “Out of My League” and give us the opportunity to play Weenie Roast.

How does it feel to play the Weenie Roast main stage?

Lovely! The first year we played one of the smaller stages and we’re playing the main stage this time around. It’s really nice to see a growth happening.

Getting airplay on KROQ is especially noteworthy because, stylistically, you’re a very diverse band.

We’ve always been a cross-genre band. We’ve never wanted to be pigeonholed as just some retro outfit. That’s one of the things that we focused when we were writing the new record, making sure we didn’t any rules set to our sound and really honing in on what Fitz and the Tantrums is as a unit. It’s really cool that it’s been accepted in all these different grounds, especially with alternative radio. It’s wonderful to see how radio is changing and accepting the different demographics of rock.

The Black Keys have a really blues/soul kind of thing like the Stones used to have. Arctic Monkeys are going on that route as well. In the pop dynamic, people are really focusing on great songwriting again. It’s cool to be a part in this shift.

Who are some of your influences?

I grew up with a lot of different soul artists. My dad was a DJ; he had quite an extensive collection of vinyl. I learned about Parliament, the Pointer Sisters, Tina Marie, and all of that stuff through his music collection.

In high school I used to pass around my Walkman with a friend between classes and we’d introduce each other to different music. I was on a crazy rock kick and he was totally into hip-hop. So I was listening to Wu-Tang and I got really into hip-hop because of that. Rage Against the Machine were starting to blow up and it was perfect for me. And there was Korn and all these crazy people that were rapping to rock music. It was a change in the tides. I listened to everything under the sun. Led Zeppelin is one of my favorite bands, Neil Young is one of my favorite artists, Aretha Franklin is an inspiration vocally. I think all of us in the band are that way. We listen to so many different things it subconsciously makes its way into the music.

What’s next for Fitz and the Tantrums?

We wrapped a tour in May, had two weeks home, and now we’re on the road again for the summer and fall tours. We’ll be touring this record for quite some time. “The Walker” did quite well for us. It was another song that went No.1 for us, so we want to jump on that momentum. After the tour, I go to Hawaii! We get about two weeks off for vacation then we’ll be back on the grind. Our focus now is spreading the music far and wide.

When you get those two weeks home in L.A., what do you like to do?

I just saw Coldplay at Royce Music Hall. I love that venue because it requires you to actually listen. You don’t see iPhones everywhere. I love the Greek, too. That’s one of my favorite outdoor venues. The Hollywood Bowl is great, too, but for me, I still feel like I’m a part of it at the Greek.

I also do a lot of eating. I recently went to a restaurant a friend of mine invested in called Smoke Oil Salt. It’s Spanish cuisine served family-style. It’s very authentic and really well done, and you get the flavors mentioned in the name. Stella Barra Pizzeria is another favorite. I’m really good friends with Jeff Mahin, who started that restaurant. I have a food writer friend I travel around with on our little fish taco challenges. When I’m not cooking for my friends or experimenting at home, I’m often out because that’s where I really get to spend time with my friends.