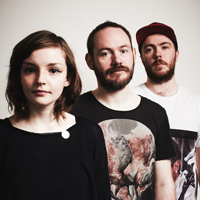 When Scottish electro-pop rockers Chvrches hit the Outdoor Theater at Coachella, the crowd didn’t hold back. Thousands of revelers shouted lyrics and hoisted up a poster of singer Lauren Mayberry’s face. Contrast that with a year ago, when few people in the United States had ever heard of the band. If they had, the first question they often asked was how to pronounce the name (“churches,” in case you’re wondering).  Then came a breakout performance at SXSW 2013, a set on Late Night with Jimmy Fallon, and a stint supporting Depeche Mode—and this was before heir debut album, The Bones of What You Believe, hit shelves.

Electronic acts are a dime a dozen but Chvrches has set itself apart thanks to its lyrical wit—it helps that Mayberry has a law degree and spent time as a freelance journalist —and ability to pen big, festival-ready songs that highlight Mayberry’s light, soaring voice instead of dwarfing it. We caught up with Mayberry, Iain Cook, and Martin Doherty backstage in Pomona before a sold-out show the band played at the Glass House between Coachella weekends.

What was it like playing the Outdoor Theater? You bypassed the tents that first-time performers are often booked in and went straight to the big stage.
Martin Doherty: It was incredible. I don’t know if we usually ever focus on how far we’ve come but that festival and that stage was a really nice feeling.

Lauren, how did you react to seeing that poster with your face when you walked on stage?
Lauren Mayberry: It’s nice. It’s also profoundly strange. But whatever people want to do with their time. If it’s a wholesome activity, that’s fine.
Iain Cook: Wholesome? I don’t if it’s wholesome, actually.
Lauren Mayberry: Yeah, it’s on the cusp.

Who are you excited to see?
Iain Cook: We went to see Arcade Fire.
Martin Doherty: Class act. Incredible.

If you could collaborate with someone on the bill, who would it be?
Iain Cook: Prince was kicking about.
Martin Doherty: Yeah, I called him. He said he’d come, but when I gave him a ring…
Lauren Mayberry: We purposely don’t have a live drummer, so if it’s a feature spot, it would be cool to have an awesome drummer. If Dave Grohl wanted to do it, I’d be fine with that. Taylor Hawkins, too.

How did you meet each other and come to form Chvrches?
Iain Cook: Martin and I have been friends for a number of years. We had talked about doing something new, and at the end of the summer in 2011, we managed to get some studio time. We were really excited with what we came up with. At the same time, I’d been producing an EP with Lauren’s band, Blue Sky Archives. I mentioned to her that my friend and I were working on stuff if she fancied having a listen. So she popped down and we got on really well. Pretty soon, we started working on new material as the three of us and went from there. It was a studio project for us. We never thought about taking it to the live arena until much later. Well, “much later” for us was probably two or three months.

Where do you see yourselves after summer festival season?
Iain Cook: We’re pretty much going until October, November with festivals and bits and pieces. Once we finish the plan is to throw ourselves 100 percent into the studio and see what comes out.

The Internet has been essential in launching Chvrches. How do you see new media changing the industry?
Lauren Mayberry: I’m interested to see what’ll happen next. Labels and media will have to embrace that. You can’t plug the hole back up once it’s started.
Martin Doherty: To me, the next step is to find a way to monetize streaming services. It’s the main avenue for so many people at the moment, but it doesn’t generate a huge amount of income for the artists.
Iain Cook: Not for the artists, no.
Lauren Mayberry: Bemoaning the fact that not as many people buy records anymore doesn’t really change the situation. I love going to record stores and browsing and finding things and taking them home, but, especially since we started touring, I buy loads of music digitally.
Iain Cook: It’ll never go back to what it was before, in terms of selling physical copies.
Martin Doherty: But that doesn’t mean that people buying music no longer exists. As long as there’s quality, free alternatives, things are harder. But it’s not about bemoaning those methods; it’s about embracing them.

Lauren, in September you wrote an article published in the Guardian hitting out at online misogyny and discussing how women are expected to “just deal with it.” What differences have you seen, if any, since it was published?
Lauren Mayberry: It’s difficult for us to tell because we turned off the direct message function the same time we put that online. Among people who come to the shows or in-stores, the response has been good. Probably because—well, I would hope—a lot of people agree with us. It’s a pretty obvious thing to agree with. I’m sure there were negative comments, but we didn’t dig around for them. If the only thing that alters is how we are allowed to conduct ourselves on a day-to-day basis, that makes it better.