Home Uncategorized Catch This Flick: Oscar-Nominated “Cutie and the Boxer” 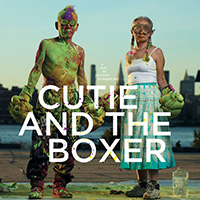 Noriko Shinohara could have done anything when she arrived in New York City as a 19-year-old art student. She chose to devote her life to avant-garde artist Ushio Shinohara, 22 years her senior and famous for his “boxing” paintings. Their 40-year marriage, plagued by alcoholism, an unstable lifestyle, and the sacrifices required to create their art, is chronicled in the Oscar-nominated documentary Cutie and the Boxer.

It might have been a typical indie doc about a pair of oddball artists except that this story is told mainly from Noriko’s point of view. An artist in her own right, she struggles with life in the shadow of her famous husband. “When I was young I was obsessed by my ideals and art was my first priority,” Noriko explains in the film. “Art was Ushio’s priority too. When it came to that, we completely agreed.”

In her series of drawings “Cutie and Bullie” Noriko fictionalizes her relationship with Ushio. Her drawings, which come to life through animation, serve as the film’s inventive narrative device. They add depth and emotion to the couple’s story, despite the occasional tragic circumstances that are depicted. What translates is a sense of love in the fullest.

“I’d never known anyone in my life who was so open-hearted,” Noriko says about Ushio in the documentary. “I began to love him. I was so filled with inspiration. I was never worried about the future.” Filmmaker Zachary Heinzerling says he was “impressed by the authenticity and environment” of the Shinoharas.

Heinzerling—who won the Best Directing Award at the 2013 Sundance Film Festival—was first attracted to their story after he met Ushio and Noriko in 2009. To Heinzerling, the Shinoharas are the last of a dying breed. At one point, Ushio says he wants an exhibition of his to be like a dinosaur’s roar, able to capture the viewer’s attention in an instant. The allusion to a dinosaur seems an apt description of the Shinoharas: nearly extinct but strong enough for one last roar.

Heinzerling has managed to capture the beauty of the Shinoharas’ relationship; even their conflicts create beauty. “It was a universal story that anyone could relate to,” Heinzerling says.

The appeal of the film has been broad. Recalling the film’s reception when it premiered at Sundance in 2013, Ushio Shinohara says, “It was a happy experience for me. I’d go out around town, go to a restaurant or a bar and have people talk to me [about the film] and that’s a really wonderful thing.”

“But one time recently, this one guy told me, ‘You must be rich and famous,’ and that was quite a surprise for me,” Ushio says. Even with all the critical acclaim for his art, he and Noriko live a life of near poverty.

“This is a very unusual lifestyle that most people won’t take,” Heinzerling says. “I think that some would call it brave, silly, or unconventional—one that’s not worth all the sacrifice.” Heinzerling believes that Ushio and Noriko’s struggles fuel their creative fervor.

In the film, Ushio says, “Art is a demon, a demon that drags you along. It’s not something you can stop, even if you should. Maybe you go insane. Your wife leaves, your kids run away. You throw yourself away to be an artist.”

“As an artist, I never finish,” Noriko says, echoing her husband. “Perfect never exists.” Instead of being discouraged by this thought, it encourages Noriko to continue drawing and painting and looking for new ideas.

There is a scene early on in the film in which Noriko and Ushio discuss the movies of Steven Spielberg. Ushio says his favorite is Jaws because it was Spielberg’s first film and first films are the best by any director. Jaws was full of “energy and idealism.” Noriko says the same dictum can be applied to artists, raising the question: If an artist’s best work is their first work, why carry on? Ushio responds, “Right now I’m an 82 year-old Jaws but I can still bite you!”

Cutie and the Boxer celebrates its BLU-RAY and DVD release on Tuesday, February 4. The film is also available for streaming online via Netflix.