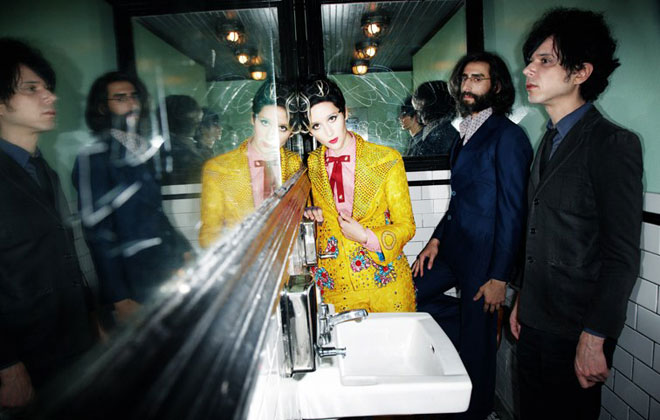 The Yeah Yeah Yeahs by Dan Martensen via Facebook

The best perk of a two-weekend Coachella is that it compels some bands to hang around in our neck of the woods – and play smaller shows – during the week-long intermission. If the inevitable sunburn, traffic jam, and hangover persuaded you to skip the whole mishegoss (despite our guide to the best bands), here’s a list of where to find the best “localchella” shows.

Monday, April 15
If you’ve been a patient fan of The Postal Service since the early 2000s, you can see the reunited band perform with Jenny Lewis at the Fox Theater in Pomona. Last week the band reissued their only album, Give Up, on its 10-year anniversary along with rarities and new tracks that feature the versatile Lewis.

Tuesday, April 16
If you’re willing to take a road trip, head down the coast to catch Nick Cave & the Bad Seeds at San Diego’s Balboa Theatre. If you drive north, you’ll see the Yeah Yeah Yeahs at the Majestic in Ventura. If you prefer to stay local, you’ll get to hear the fuzzy guitars and smooth vocals of blues phenom Gary Clark, Jr. at the Roxy. He’s not a Coachella act – this year – but this is your only chance to see him until he returns in the fall with Dave Matthews Band. Also tonight: Modest Mouse at the Fox Pomona, Franz Ferdinand at the Fonda, Foals at the El Rey.

Wednesday, April 17
The mid-week peak continues with something for nearly everyone: The xx (Fox Pomona), Dinosaur Jr. (The Glasshouse, Pomona), Alt-J (The Observatory, Santa Ana), Lou Reed (The Orpheum), Tegan & Sara (Humphrey’s by the Bay, San Diego). If you’re looking for something new, Palma Violets, one of 2012’s standout debut acts, will play the Echoplex. Named Britain’s most exciting prospect of 2013 by the NME, these lads listed in the smallest font on the Coachella poster are no boy band, as they’ve built quite a reputation for house party-style gigs. Get ready for echoing guitars cranked up to 11, fresh songwriting, and charming accents.

Thursday, April 18
The Santa Barbara Bowl showcases the danceable alt-rock of English icons New Order who have incorporated former Smiths guitarist Johnny Marr into the band. Or consider heading back Pomona where indie rockers Vampire Weekend play tracks from their upcoming album, Modern Vampires of the City, at the Fox. If you’re lamenting how rising British singer-songwriter Ben Howard only hit the East Coast on the recent Mumford & Sons tour, you can now catch him at the Belly Up Tavern in Solana Beach. Coachella 2013 is more Britpop than hip-hop, but 2 Chainz will carry that torch at the Observatory in Santa Ana.

Friday, April 19
Weekend two of Coachella begins in Indio, but not for bands that aren’t scheduled for the first day. We suggest heading to Santa Barbara for the sweet, ambient post-rock sounds of Iceland’s Sigur Rós.

Bonus
On Monday, April 22 and Tuesday, April 23, Japandroids and Bat for Lashes will treat Southern Californians to post-Coachella shows, the former at Pomona’s Glasshouse and the latter at the Fonda.

Use Goldenvoice’s “localchella” calendar and the corresponding links to see ticket availability for these acts and dozens more here.