Home Animals The Catio Is a Patio for Your Cat Because You Win, Cats.... 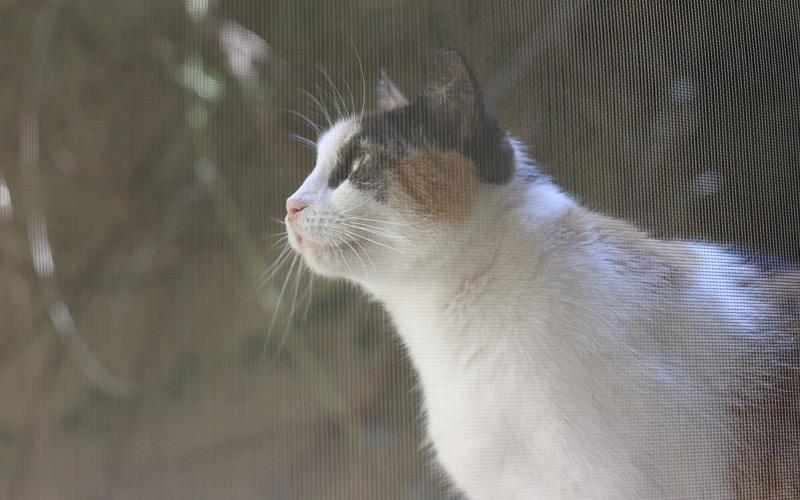 Chris Preston believes that in order to build a superior catio, you have to think like a cat. “I know what cats like,” he says. “I know how they think, I know what they want.”

What exactly does that mean?

“They want to be up high, they want a bed to lay in and they don’t need a lot of space. They don’t need to run around like a dog. They chill,” he says, lingering on the word.

A “catio,” if you haven’t already figured it out, is a cat patio, and Preston, with his insight into the feline mind, is the self-proclaimed, “Catio King.”

The catio is the latest craze among cat owners (or rather, the people whom cats deign to live with). Your typical catio is a screened-in, protective enclosure that affords cats some of the excitement of being outdoors–bird watching, sunbathing–without the dangers of coyotes and cars.

Ranging in style from the most basic, box-shaped shed, to multi-tiered, mini-homes nicer than your first apartment, catios have shelves, beds, tunnels, and if the cat’s into it, even room for a human.

It’s possible to buy a pre-fab catio for a few hundred dollars online, but Preston, who is based in Palm Springs, seems to be cornering the market on custom catios all over the Southland. Using an impenetrable mesh called “hardware cloth,” he constructs them exactly to you and your cat’s specifications.

After a career in landscape architecture, Preston fell into the catio business by accident when an animal-loving friend of his wife’s asked him to build a catio for rescue cats she was fostering.

Preston has designed catios of all shapes and sizes for cats from San Diego to Sacramento. They start at around $1,500, and every one is a little different, though for the most part they’re pretty simple. “I don’t do elevators or anything like that,” he says. But he did construct a tunnel for one client, running from the house to a freestanding catio in the yard. The cats were pleased.

“They hang out in the tunnel more than anything,” he laughs.

Clients decorate the inside with scratching posts, beds and toys. Preston says that putting the litter box in a catio has been a major selling point. He also works with clients on catio location. Catio tip: never have a catio facing the side of another house. “That’s no fun for a cat,” Preston says. “There’s no view! I want to put it somewhere where they’re looking out over trees, and they can see the birds.”

Preston has seven cats and, yes, he’s built them a catio. It’s given him peace of mind. “I have one, Buster, who’s a tabby, who used to take off for weeks at a time, he fought every cat in the neighborhood,” he says. And now with the catio? “He’s acclimated very, very well. Cats, as long as they have food and lovin’, they’re happy.”

He tells me that his clients come to him because they know he’s a “cat guy.”

“You don’t get to decide what they like, they decide,” he says. “You don’t decide whether they want to be petted, they decide. That’s why I love cats: their independence.”

What if you buy a thousand-dollar catio and your cat never goes inside? Preston says that’s never happened.

Preston suggests discussing catio construction plans with your cat ahead of time.