Home Uncategorized Cat Fight: What Happens When 5 of the Internet’s Top Felines Make... 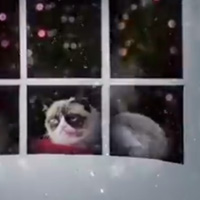 Imagine Beyoncé, Mariah Carey, Celine Dion, Kelly Clarkson, and Cher agreeing to share the spotlight for a Christmas-themed music video. The feline equivalent of that happened in Hollywood today.

Online sensation Grumpy Cat, who hasn’t faded into obscurity thanks to savvy brand management, was joined by four of his kitty pals at Capitol Records where the quintet debut its music video “Hard to be a Cat at Christmas.” How difficult is it to spend your days napping, attacking tinsel, shredding wrapping paper, and napping yet again? Pretty hard.

In the video, Grumpy Cat is joined by Colonel Meow, Nala Cat, Oskar the Blind Cat, and Hamilton the Hipster Cat. (Okay, it’s more like Beyoncé and four singers you’ve barely heard of.) The clip features the meme cats staring forlornly out of snow-covered windows, poking at presents under the tree, and knocking elves off shelves. The message is clear: They may be adorable but they’re being left out of the holiday fun.

The video is actually a Friskies commercial, but for every click it receives, the cat food company will donate one can of cat food to an animal shelter “chosen” by the cats. Colonel Meow selected the Seattle Persian and Himalayan Rescue shelter that saved him.

Cats, Christmas, and charity. What more could you want? “A reality show!” joked pint-sized cat lady Angela Kinsey, who played uptight accountant Angela Martin on The Office. “All of them, one house,” she said. “I want to see that go down!” Don’t we all? If only Morris the Cat had been born in the era of reality TV.