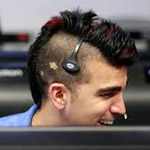 Four million viewers tuned in when NASA live-streamed the Curiosity Rover’s arrival on the red planet from Jet Propulsion Laboratory in La Cañada Flintridge on Sunday night. The Web cast had everything we had hoped it would when we clicked over: suspense; drama; adventure; fundamental questions about Man and Life; loveable, quirky characters; the triumph of human intelligence; and a thrilling, tearjerker of an ending. Movie rights are undoubtedly in the works, so we’ve taken the liberty of giving JPL’s esteemed engineers* the Hollywood treatment. Steven Spielberg can thank us later. Keith Comeaux, EDL Flight Director
Played by: Jeremy Renner
The Bourne Legacy actor is a dead ringer for Comeaux, and we know from The Hurt Locker that’s he’s got pacing thoughtfully down pat. Bobak Ferdowski, Systems Engineer
Played by: Zachary Quinto
There’s a resemblance, sure, but Quinto’s intelligent intensity in Margin Call makes him our top pick for this emotionally powerful and edgy—albeit dialogue-free—role. Ken Diaz, Systems Engineer
Played by: Jonah Hill
A mix between Moneyball’s Peter Brand and Get Him To the Greek’s Aaron Green, Diaz does smart and stressed with a boyish smile. Attitude Control System Engineers Erisa Hines and Fred Serricchio
Played by: Emily Blunt and Ryan Gosling
You could measure the chemistry between these co-workers in light years. Now that we think of it, why haven’t we seen a Blunt-Gosling pairing yet? This is surely the project they’ve both been waiting for. Steve Collins, Attitude Control System Engineer
Played by: Bill Murray
Like our favorite oddball actor, Collins has charisma to spare and facial expressions that could disarm ET. Plus, it’s been too long since Murray’s really stretched himself for a role, physically speaking. Wigs=Academy Awards. We’re just sayin’!