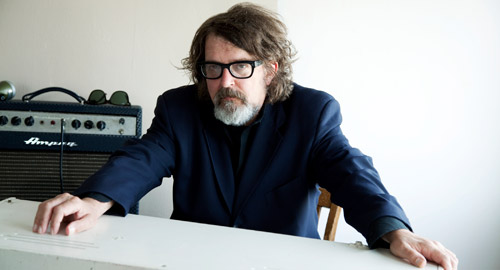 Peter Case is alive and well. For that, we should all be grateful. 2009 was a scary year for the singer-songwriter, as it would be for anyone facing open-heart surgery. Two bypasses were performed at a hefty price, and friends in Austin, Houston, Nashville and L.A. put on concerts to help pay the bills.  2010 is certainly treating him much better, and this month sees the release his new CD, Wig!

“The album came about quickly,” he tells me at a house concert where he performed last Friday. 2007’s Grammy nominated Let Us Now Praise Sleepy John was an all-acoustic endeavor, and he’s happy to have plugged the guitars back in on this one.

Peter can do it all. Many remember him as a member of the ‘70s new wave group the Nerves and as founder of the ‘80s power pop rock band the Plimsouls. Since then he’s had a strong solo career in various genres, nabbing two other Grammy nominations.

This show was the start of a summer tour and was at the home of KCRW DJ and TV and film music supervisor Gary Calamar, in what he calls his “World Famous Mimosa Series.” The concerts always start at 11 a.m. (Case said that to play this early he might as well have stayed up all night) and the Calamars’ Laurel Canyon digs are the perfect setting for daytime music, mimosa in hand. The host kicked back with his feet on an ottoman as music industry folks and musicians alike took in the show. Case did a Plimsouls’ request, “Zero Hour,” but mostly concentrated on tunes from the new CD, which despite some serious topics, has spirited bluesy riffs by someone obviously happy to be jamming. Because no matter the genre, Peter Case has got soul. And we hope that both body and soul are around for many years to come.

Case plays at June 26 at the Claremont Folk Music Center and July 9 at McCabe’s in Santa Monica.