Home Outdoors Gardens and Green Spaces The Most Surprising Little Urban Farm in L.A. Is on a Mar... 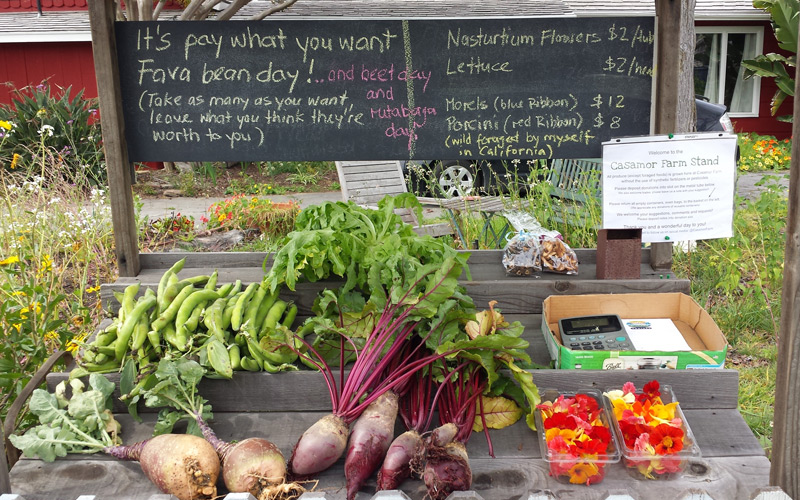 Walk north past the Mar Vista Post Office along Grand View Boulevard and enter a tree-lined, residential street. Less than a block in, on the street’s west side, you’ll find a red ranch house surrounded by wooden furniture, an elliptical driveway, and a wooden stand with a blackboard menu that reads, “Take as many as you want, leave what you think they’re worth to you.” This is the unlikely setting for Casamor Farm, an urban farmhouse run by Andre Kohler that grows produce on-site on a Mar Vista side street.

Kohler is a Swiss national who has cultivated a small vegetable patch in every home he’s had in L.A. In 2014 he converted his front and back yards into a “food garden” by planting 30 fruit and nut trees and replacing the lawn with growing beds.

He launched the farm stand in 2016 as a way to share his surplus harvest with neighbors, putting out vegetables every Sunday and encouraging visitors to “pay what you want.” Kohler says farm stands that operate on an honor system are an “integral part of the agricultural landscape” in Switzerland. Friends questioned whether a similar endeavor would work in L.A., but Kohler persisted and learned “it works perfectly.”

Southern California cities such as Oxnard, Camarillo, and Tehachapi are known as agricultural hotbeds, but Mar Vista? Kohler swears that his neighborhood sandwiched between Culver City and Venice is a sneaky-great spot to grow. “The proximity to the ocean keeps everything rather cool, but we also get more sun than areas closer to the beach that are often shrouded in fog during spring and summer,” he said. “Mar Vista used to be farmland with mainly legumes being grown, so the earth is quite rich in nitrogen.”

To help boost his plants, he composted spent coffee grounds from a nearby coffeehouse, Venice Grind, as well as cuttings from the farm and surplus mushrooms. He says, “The only drawback of growing food in Mar Vista is the sometimes high level of moisture in the air, which promotes the growth of powdery mildew.”

Converting an urban lawn and home, which he rents from a friend, into Casamor Farm required some serious work. The name is short for “casa de amor,” out of respect for California’s heritage. Kohler initially teamed with Home Grown Gardens and Sunshine Gardens, two local garden centers that help design, install, and maintain home gardens, to prepare his land for food production. Master gardener Ade Onaolapo and gardener Ben Hirschfeld helped with the setup and helped grow crops the first year. The farm’s first manager, Christine Baker, was also instrumental in Casamor Farm’s early success.

“We have become very disconnected from our food and where it comes from,” Kohler said. “The ability to grow and find food has been lost for most of the people especially in the Western world. We have also lost our sense for quality, not being able or willing to distinguish between a mass-produced, tasteless vegetable and one grown by a dedicated farmer or found in the wild.”

His corrective mission extends to the wild, where Kohler frequently forages for mushrooms, acorns, nuts, berries, herbs, and flowers. His hunt covers the mountains, but also focuses right here in the city, where he snags fruit, avocados, and lemons. He’ll also “forage” frozen fish from grocery store dumpsters to feed his cats. He even prepares a “dumpster Thanksgiving dinner” prepared entirely from “trash,” a vision that brings to mind the dumpster diving documentary Just Eat It: A Food Waste Story.

When Kohler isn’t tending to the land or roving the outdoors for food finds, he builds furniture, interiors, and lights. In the past he ran a bed-and-breakfast on the farm to help finance his home’s conversion. He also operated a clothing business for 12 years that designed, manufactured, imported, and wholesaled women’s knit tops. He’s even developing food products using his own forages and harvests. In his spare time he goes to landfills and looks for things he can fix.

This has not been Casamor Farm’s best year, since Kohler’s been busy with other activities and took a big summer trip home to Europe. However, he did connect with some “like-minded people” a couple months back, and they’ve started planting new crops. Expect the yard to get greener and for more inventory to return to the farm stand in November.

RELATED: Some of the Best Bread in California Is Backed in a Tiny Woodshop in Ojai

New Legislation to Stamp out Fraud in California Farmers Markets