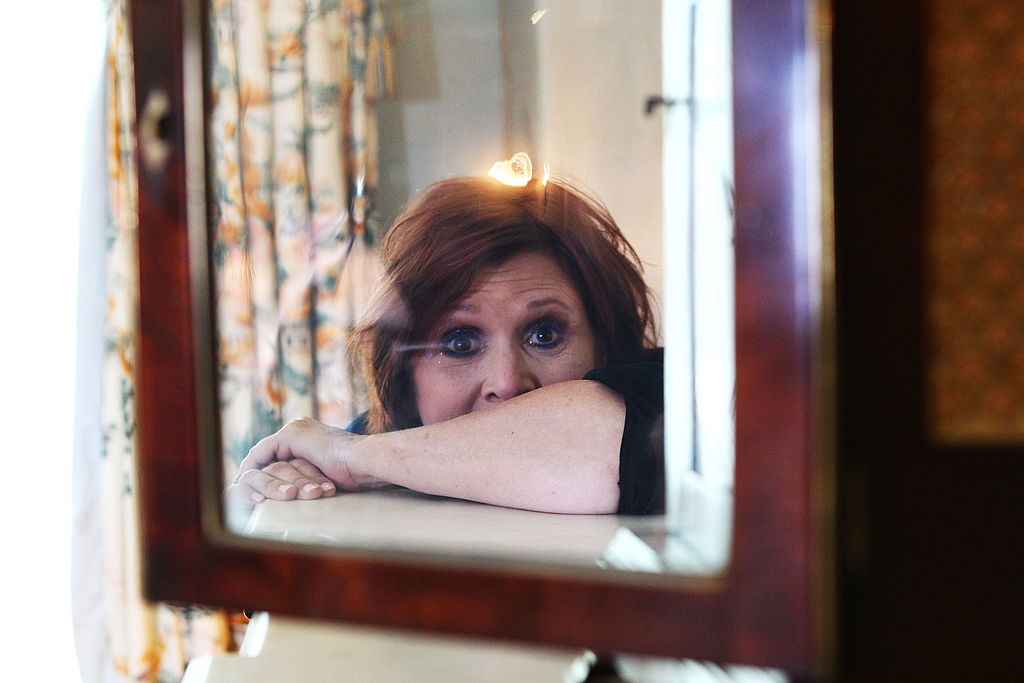 It was 2005 when I first spotted one of the world’s most famous faces during the break at an AA meeting just off of Sunset Boulevard. It was Carrie Fisher. She was five-foot-nothing in her black cocktail dress, her hair a bright fuchsia color, and she was running, like a Haight Ashbury hippie.

I ran after her, into the courtyard of the synagogue that was hosting the meeting, and tapped her on the shoulder. “I hope you don’t think I’m a stalker,” I said. “I just want to introduce myself and tell you that I worship the ground you walk on.” As those stalkerish sentences came out of my mouth, I had second thoughts about approaching this writer/actress/icon. Why would a woman who’d played a role in a series of blockbuster movies want anything to do with me?

At this point I smelled—like body odor, cigarettes and mildew. For two weeks, I’d been living in my car. Before that, I’d been in rehab for three months.

Once upon a time, I had smelled like Chanel No. 19. I had lived in a lovely two-story townhouse in Pasadena with a Zen garden. I was highly educated and had worked for one of the richest men in the world. But while everything looked great on the outside, on the inside I was dying of alcoholism. I was married to a guy I’d met when we’d both worked at a Hollywood studio—a guy who’d courted me, had sporadic and lousy sex with me for three years and then married me, at which point we had no sex at all for six years.

My best thinking back then was that everything would be fine if I could just get pregnant. Of course, that would have required an Immaculate Conception. Moreover, if I’d somehow managed to get pregnant, I would surely have given birth to a giant Xanax.

I had tried to quit drugs cold turkey and soon found myself driving down a one-way street the wrong way. So I checked myself into rehab. Now, I was out and—because I’d been fired from my high-powered job (turns out that it’s frowned upon to throw work into a drawer and take naps at your desk), and because my husband had evicted me—I was calling my 2004 Toyota Camry home.

Now, in the courtyard, my hands were shaking. The combination of detoxing, talking to Princess Leia, and being out in the crisp spring air had caused me to break out in a cold sweat. But Carrie just put her small, soft hands onto my shaking ones, slipped a cigarette in my mouth, and lit it. When she touched my black sweatshirt, ever so gently, my story tumbled out of my mouth: my boss, Barry Diller, had (rightly) fired me, my soon-to-be-ex-husband had (wrongly) denied me access to our joint account.

“Why aren’t your parents helping you?” Carrie asked bluntly. I pried my greasy ponytail from the back of my sweaty neck and told the truth: “I’m not exactly the daughter they wanted.”

And that was all it took. “Come live with me,” she commanded. And surreally, she seemed to mean it.

I got out and dragged the three black Glad trash bags full of clothing—my only belongings—up a rocky path. When I opened the door of the guest house, my eyes were immediately drawn to a picture hung above a black-and-red chest of drawers: a Japanese woman with long wavy hair and a very wide face. I’d soon learn that the woman was the famous mother of the guy who had occupied this room before me: Sean Ono Lennon. As Carrie would later make public in materials for her 2011 one-woman show, Wishful Drinking, she took in many houseguests, including Craig Bierko, Michael Rosenbaum, Charlie Wessler, Griffin Dunne, and James Blunt. Now I was one of them.

The first night that I was there, I’ll admit that I did use Lennon’s soap in the shower, just to have some Beatles DNA on me. Then I went up to the main house to the kitchen, where I found Carrie in sweats spooning out Baskin Robbins Chocolate Chip Cookie Dough ice cream into a large bowl. The kitchen walls had different kinds of Prozac-type of pills painted on them, which made me chuckle. She took a look at me and my sad eyes and shoved a bowl of ice cream into my hands. Then, she motioned for me to follow her to her bedroom.

On the way, while walking through the living room, I noticed an old ’50s juke box, a grand piano, a moose’s head, and various other wacky thrift store finds, along with a framed picture of Carrie and John Belushi. Her bedroom was equally quirky. There was an R2D2 trash can, an eclectic book collection (David Sedaris, Salman Rushdie, Helen Fielding, etc.), and an egg-shaped chair that hung from the ceiling. Her bed seemed huge—a California King with a heavy wooden frame. She turned on Casablanca on her giant flat screen TV and we both got under the covers, ate ice cream, and chain smoked. I instantly felt comforted and at ease. It would be the first of many nights like that.

It seemed Carrie and I had everything in common. We were both recovering drug addicts/alcoholics, we both had mental illnesses, and we had both inadvertently married gay men! What were the odds?! I would cry over my soon-to-be ex-husband and how betrayed and neglected I felt, especially sexually. I don’t think Carrie would mind me revealing that we ended up getting matching vibrators. She liked calling them “light sabers.”

I was suffering at the time. Being spiritually, emotionally, and financially bankrupt hurts a lot, and at times I thought about suicide. Carrie understood. In AA we’re taught that an alcoholic’s primary purpose is to stay sober and to help another alcoholic. Carrie took that purpose seriously. Beyond that I think she had a soft place in her heart for the weirdos, the traumatized and those circling the drain of life. Whatever made her do it, she made all the difference for me. Having welcomed me into her home, Carrie gave me a warm, safe place to recover. She clothed, fed and nursed me back to emotional health. She gave me hope again.

There were times, of course, when the inherent inequality in the relationship—the fact that she was massively famous and I was utterly not—caused friction. When we were out in public together, fans and entertainment industry people would literally push me aside to get to her. I had worked for celebrities before and was used to being shoved out of the way, but this was different. I wasn’t working for her. I was her friend.

All those feelings I’d had growing up—the ones that left me feeling neglected and insignificant—came back to me in spades. I was in the midst of doing what’s known in AA as “step work” and that was making me more aware that I’d lived my life hiding behind a string of powerful bosses, celebrities, and romantic partners. I had been eclipsing myself with these bright lights for a long time. As I got healthier, I came to the realization that I needed to try to shine brilliantly on my own.

I had been looking for work for months, by this point, but only then did I find a job in the publications department at the RAND Corporation. Reporting for duty every day at a government think tank was challenging for a girl who couldn’t yet think again (brain function takes a bit to come back in early sobriety). But I did it. The job didn’t pay much, but it allowed me to move out of Carrie’s guest house and into my own place.

In all, I was Carrie’s guest for six months. I can truly say that she enabled me to move forward. While staying with her, I wrote a novel, which I called Junky American Princess. It’s never been published, but writing it was cathartic. In the 10 years since, I have slowly, little by little, been able to put my life back together.

In 2008, Carrie encouraged me to do stand-up comedy. Before those first appearances, she would literally throw glitter on me backstage. I now perform regularly at places like the Comedy Store and the Improv. In 2013, when Carrie became the spokesperson for Jenny Craig, I joined too, only to get really sick with gallbladder disease. When I sued Jenny Craig, TMZ, People Magazine, and USA Today wrote stories. Eventually, though, I dropped the case, opting instead to talk about the dangers of the dieting industry via my blog, the selfworthdiet.com. Oh, and I got married again—to a straight man! And I mean that in more ways than one: We are both recovering addicts, and the ceremony was held at the Chabad Residential Treatment Center, a drug and alcohol rehab facility on the corner of Olympic and Hauser Boulevards. By which I mean: It was perfect.

I would love to say that throughout all this, Carrie and I remained as close as we’d been. We didn’t. Still, I will be forever grateful to her. When she died, I thanked her on Twitter for saving my life.

My current philosophy—and Carrie helped me come up with it—is that life is one great big dinner party. And if I have any message to give those in early recovery who feel “less than,” it’s this: Take your rightful place at the table, like Carrie encouraged me to do. And may the force be with you.

Mara Shapshay is a writer, body image activist, baker, and stand-up comedienne who lives in the Pico-Robertson area.  She is a featured writer on Wattpad and her work has been published on the Huffington Post, Hollywood Journal, Jewish Journal and other publications. She can be seen next producing and performing in the Radford Hall Variety Show – A Tribute to Carrie Fisher, on Feb 11th.  She will be telling stories of living with Carrie in between acts. Visit her website.