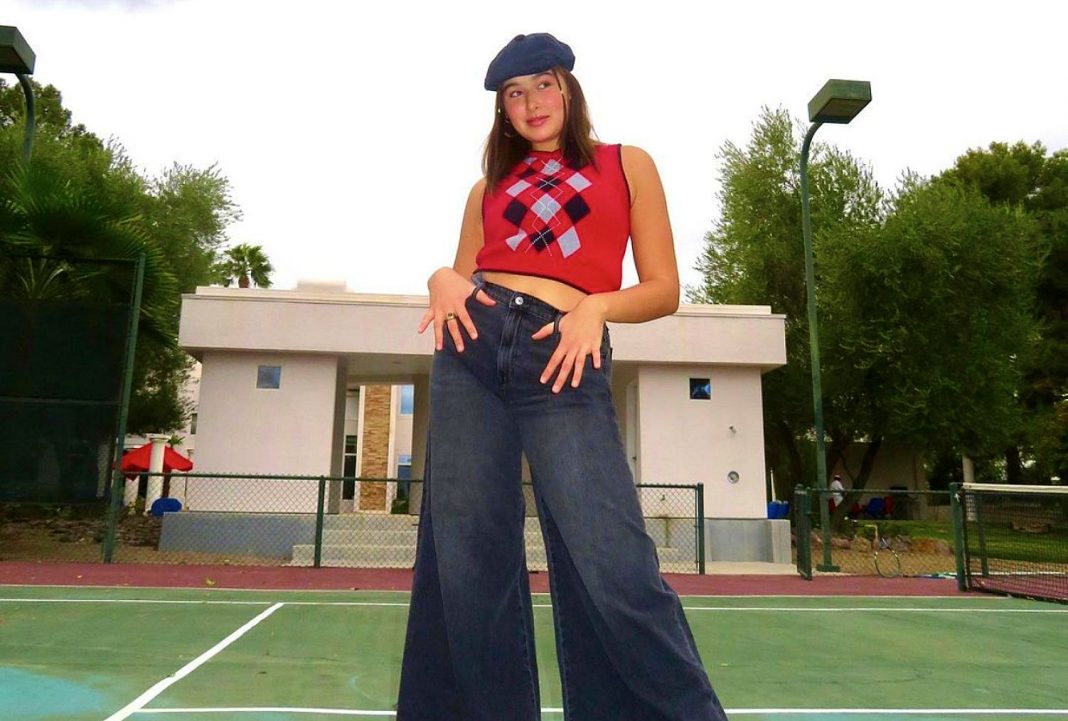 Caroline Ricke didn’t even know what satire was until someone told her that’s what she was doing with her online rich girl persona. But sometimes you don’t have to know what you’re doing to totally nail it.

That seems to be the case with Ricke, who has carved out a niche of her own on TikTok. Even though the 21-year-old didn’t have cable TV growing up, her punny videos about being rich and fabulous feel like they were taken straight out of a movie from the ’90s or early aughts. Replace Alicia Silverstone or Reese Witherspoon or Hilary Duff with Ricke and her funky thrifted outfits and you would be hard pressed to tell a difference. “Just because I’m young and hot, doesn’t mean I have to be cuffed,” she quipps in one TikTok. “The only time I’ve been cuffed is when I got arrested for assault. It wasn’t my fault. Like, what’s wrong with seasoning my food?” Kelis’s “Milkshake” plays in the background, cementing the 2003 feel.

Looking for a hobby while studying marketing in college, Ricke’s little brother encouraged her to start a YouTube channel. The channel’s first videos are centered around her “normal” life, but Ricke says she didn’t feel like that was exciting enough, so she developed a character. In late 2018, she uploaded the satirical HARVARD ACCEPTANCE REACTION and the satire was so good, viewers didn’t know if it was a joke or serious.

“Ever since I was a little girl, it’s always been my dream to apply to Harvard,” she says in the Harvard acceptance video.

“I just started portraying a rich girl, which is funny because as I’m in college, I’m living in a dorm, like it was obvious that I’m not rich and I don’t drive a Tesla,” she tells us. “I would just make up these blatant lies and people usually understood it was a joke, but then there were some people that were like, ‘You’re completely lying.’”

It “snowballed” from there, Ricke says. In March, she joined TikTok as @richcaroline, where she films short, scripted videos around her “mansion” delivering bad puns. “You have to stop calling yourself ugly. The pond is that way if you wanna fish for compliments,” she says in one TikTok. She films most of the TikToks in The House Nobody Asked For, a content house made up of several comedic creators that originated in L.A. then moved to Vegas this year. She joined the house in July after one of the creators invited her.

“I lied to my parents and told them that I knew most of the people in the house, but I really didn’t,” Ricke says.

Now her roommates often appear in her videos, including TikToker Dawn Morante, who makes several appearances as her fake best friend.

if serving is a crime, give me a life sentence

After not having cable most of her life, she got a Disney+ subscription during quarantine and says she now draws inspiration from old shows, like Lizzie McGuire. Ricke’s style of editing and use of old music, cheesy editing and sound effects, and old cellphones as props sends viewers back 15 years. “This could be the beginning of a teen disney y2k movie it’s so cool,” one TikTok comment reads.

It takes days for Ricke to write, edit, direct, and film these 60-second TikToks, but not before her brother sends his final approval for the jokes. “Sometimes I think things are funny and then they don’t land, so he’ll tell me if my jokes are funny or not and he’ll tell me what to take out,” she says.

The style has resonated with audiences and brands. She has more than 2 million followers and has filmed sponsored content for American Eagle, Netflix, lululemon, Beats by Dre, Tinder, and Chipotle.

“I just make things up,” Ricke says. “Like, I always say, ‘Oh, I hate men,’ but I don’t actually hate men, like, it’s just a joke because a lot of people think that stuff is kind of funny. … I don’t model it after anyone. I get compared to Cher from Clueless, which I think is iconic.”

How One TikToker Made a Career Out of Thrifted Clothing