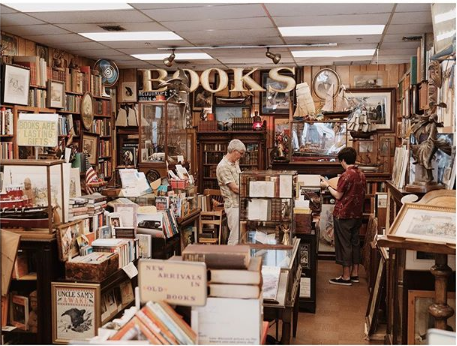 In May, Caravan Book Store would have celebrated its 64th year on Grand Avenue in downtown Los Angeles. Instead, second-generation owner Leonard Bernstein announced today via email that the store will be shuttering this month, following a closing sale that will run from February 3-24. Bernstein wrote:

“After almost 64 years on Grand Avenue in downtown Los Angeles, the Caravan Book Store is moving on to new adventures.

The dynamic nature of the store is an experience I’ve loved, and I’ve enjoyed sharing it with so many people. It has been a family tradition for three generations.

My parents established the business in 1954, and I grew up in it, learning the book trade from them. I’ve had the pleasure of watching my children grow up in it as well, bringing their curiosity and imagination and, later as adults, contributing to its development and growth.”

Described by the L.A. Times in 2016 as a “raft in a downtown awash in rising rents and fast entertainment…a refuge where pages matter more than page views, Gutenberg more than Google,” Caravan had continued to specialize in books “old and new, curious and rare,” as signage indicates, particularly about California, the West, and early L.A., as it did when Bernstein’s parents opened up shop in the space across the street from Caravan’s current location.

On the occasion of the store’s 60th anniversary, Bernstein’s daughter Leilah wrote the following for this publication:

“For me, the Caravan Book Store has always been a second home. … The business has been a cozy retreat: narrow aisles, hand-lettered signs, clocks that still have to be wound. The store is where I napped as an infant, did my homework after school, filled out my college applications, and met first dates. The voracious reading habit I picked up there led me into journalism; sweeping the floor and washing the glass display cases…well, I’m sure those skills will last a lifetime, too.”

Although the physical location is closing, Bernstein said in his email that “business will continue,” and encouraged people to reach out via email or “good old-fashioned U.S. mail” at his new post office box beginning March 1: Caravan Book Store, P.O. Box 550, 7162 Beverly Blvd., Los Angeles, 90036.

RELATED: The 14 Best Mom and Pop Bookstore in L.A.