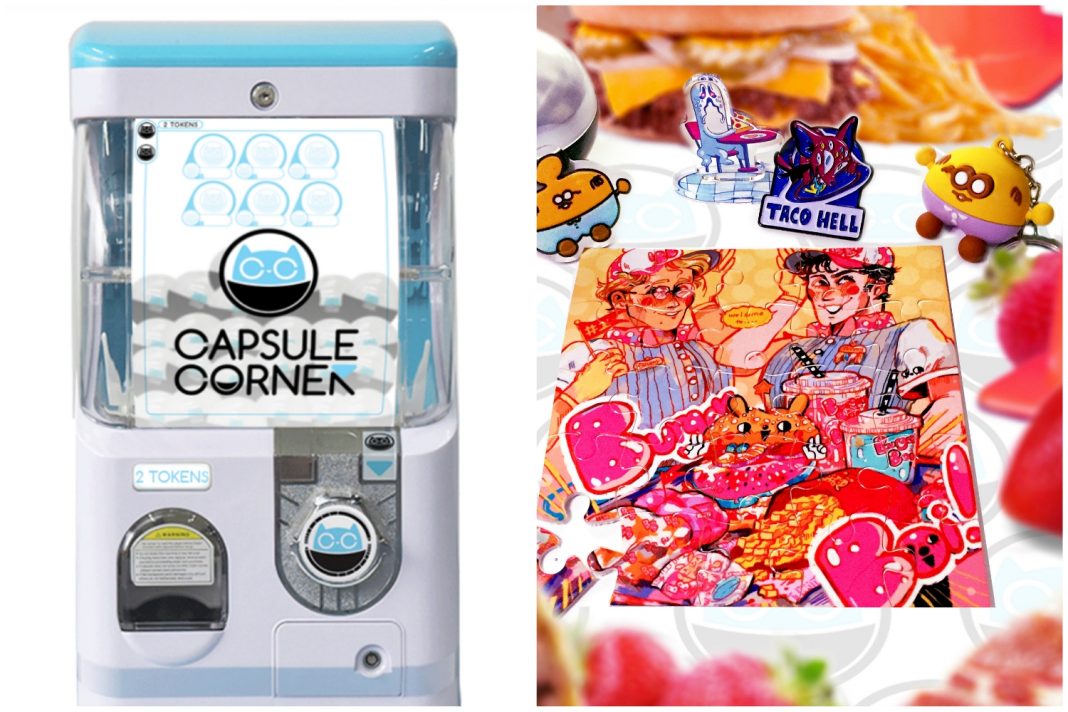 Capsule Corner doesn’t operate typical vending machines. A gallery-within-a-gallery at downtown art space the Hive, it’s a cozy nook that’s home to nine machines patterned after Japanese gachapons and filled with goodies designed by indie artists. You can get a semi-mysterious prize for anywhere from $5 to $15, obtained with tokens purchased at the Hive’s front desk.

One of those machines functions as a group exhibition of sorts. Owner Edie Xu curates a selection of established and up-and-coming artists who are part of a rotation that lasts from three to six months. The artists are commissioned to provide illustrations. Xu has the their designs manufactured as small items, like pins and keychains. During the course of the rotation, each artist will have a solo show as well, with original works on view at the pint-sized space. It’s a way of supporting artists who have often developed healthy online followings while bringing their work to fans at an affordable price point.

Xu, a Koreatown-based artist who had previously shown at the Hive, conceived of Capsule Corner after receiving an email about an open space at the venue in fall of 2017. They were inspired by the machines inside Tokyo’s Nakano Broadway shopping center. Meanwhile, Xu had also seen artists build up significant followings at events like anime and comic book conventions. At conventions, though, fan art depicting pop culture characters rules. Capsule Corner was designed as an opportunity for artists to focus on their original illustrative works.

In the beginning, it was also a conceptual art project for Xu. They had long been interested in the intersection of consumerism and art and Capsule Corner plays on that. “The art world is this random machine,” says Xu.

An art collector might buy works sight unseen based on perceived value and how that might appreciate over time. Even if there’s good reason to suspect that a piece of art might be a good investment, it’s still, ultimately, speculation. In some ways, it can be like sticking your money in a machine and waiting to see what prize drops.

“[Capsule Corner] was supposed to essentially let the person buying contemplate, why do I want this more, versus the other?” Xu explains. The use of vending machines also reflects perceptions of value, since most in the U.S. are accustomed to small, coin-operated models dispensing candy and tiny toys.

Capsule Corner launched in 2018 with just one wall at the Hive and a double-decker vending machine, but it has expanded quickly. Xu sometimes takes the token-operated dispensers to special events. They also stock two similar devices at Little Tokyo boutique Fickle Wish, which specializes in items from local and Japanese indie artists. “I think it’s a really interesting idea, how they’re focusing on it as a way to collect art without actually buying a full, original art piece,” says Ona Morgana, the shop “chief” at Fickle Wish, adding that “it’s a really cool and inclusive way for people to have small pieces of art from artists that they like.”

The model for Capsule Corner is similar to other art and art merchandise events built with affordability in mind. Every December, GR2 in West Los Angeles hosts its Post-It Show, where crowds scan walls of Post-It notes looking for budget-friendly originals. Curator Matt Kennedy’s The Coaster Show, which started at La Luz de Jesus and is now at Gallery 30 South, includes a bounty of small originals; its seventh anniversary show is on October 5. At Gallery Nucleus, Pin-Pal-Palooza is a merch-centric event that includes indie artists amongst its vendors. On September 14, Chinatown’s Leiminspace will be hosting Stuck In Heaven, where stickers are the canvases. “Stickers are a mini artwork that can be easily incorporated into everyday life,” says show co-curator Kat Ball in an email. “They are some of the most accessible art forms.”

Accessibility is key, not just for would-be collectors, but for the artists themselves. Amanda Huynh is one artist whose participation in Capsule Corner led to other shows. A motion capture designer by day, Huynh was part of a rotation in 2018. Her solo show led to inclusion in other exhibitions at the Hive. “I’m very thankful that Capsule Corner kickstarted that for me,” Huynh says by phone.

She describes Capsule Corner as a “very approachable space,” which can be important for emerging artists. “I was afraid of doing gallery stuff because I didn’t know how to go about it,” Huynh says. “I felt like I was an invading a space, but I don’t feel that way with Capsule Corner.”

Xu says that the future of Capsule Corner might involve more digital goodies as well. In the current rotation, prizes by Lily Van include individual puzzle pieces with a link that allows you to download the full image. Taking Capsule Corner beyond the prize is an intriguing next step.

“That’s something that I want to welcome and explore more,” says Xu.

RELATED: At 80, Judy Chicago Is Claiming Her Rightful Place in L.A. Art History