Home Music What the 2020 Candidates Listen to, Read, and Watch 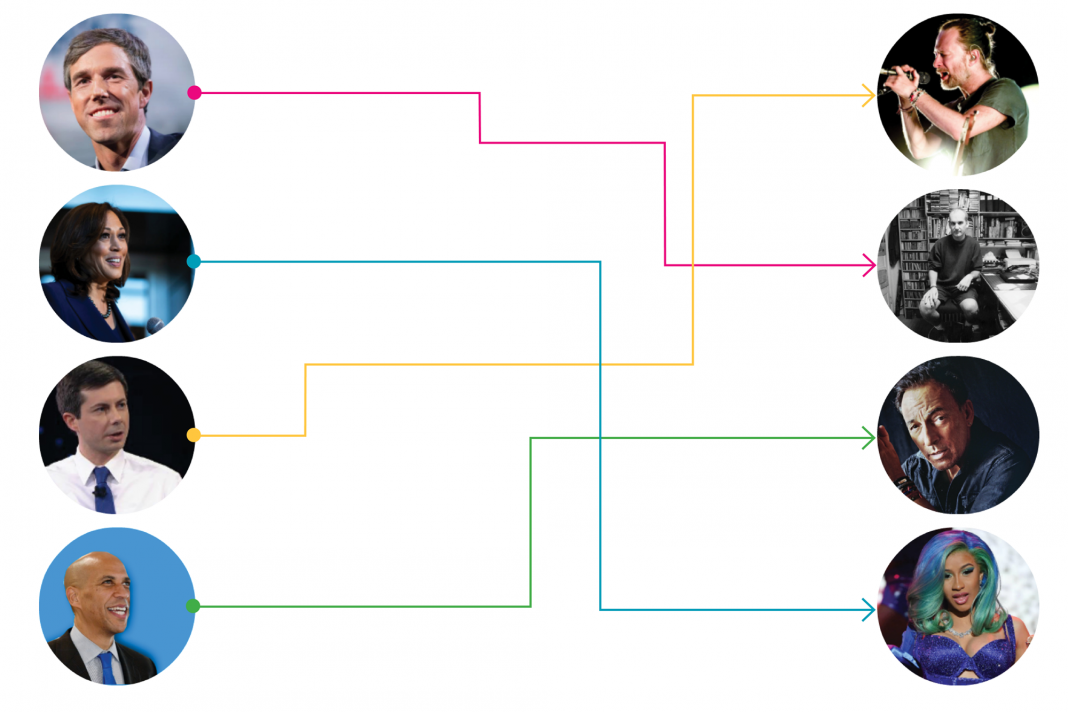 Politicians have been using pop culture to make themselves seem more relatable at least since Richard Nixon popped up on Laugh In, but ever since Bill Clinton broke out his sax for Arsenio in ’92, showing off some type of creative or cultural connection has become a rite of passage for would-be presidents.

Much of the 2020 crop of Dems has been following Clinton’s lead, falling over themselves to boast about teenage bands, office playlists, or campaign bus reading material, in the hopes it will tell voters something about their respective political personas. We’ve pulled together some notes on several of the top candidates’ pop culture preferences below.

In his youth, Texas Congressman Beto O’Rourke played in a rock band with Cedric Bixler-Zavala, who would go on to front influential bands At the Drive-In and the Mars Volta. O’Rourke has waxed rhapsodic about Fugazi and Minor Threat (lead singer Ian MacKaye is pictured) in interviews, and even picked up an acoustic guitar to jam with Willie Nelson at a concert during his 2018 senate race against Ted Cruz.

In an interview with The Breakfast Club, Senator Harris talked about smoking marijuana and listening to rap music during college at Howard. The seemingly innocuous comment resulted in backlash because she cited Snoop and Tupac as favorite artists of the era, which didn’t seem to line up with her completing undergrad in 1986. In Harris’ defense, she could have been thinking of law school, and Tupac was rapping as early as ’87, and there were three co-hosts suggesting artists to her, but regardless, the damage was done, and she looked like a cop. More recently, a staffer snapped footage of Harris getting down to “I Like It,” by another of the Senator’s favorite artists, Cardi B.

Senator Cory Booker is the boyfriend of actress Rosario Dawson, and he identifies as a member of the “hip-hop generation,” but he’s not the candidate to look to for underground jams. His official Spotify account gives away his New Jersey roots with tracks by Bruce Springsteen and Bon Jovi, mixed with irrefutable classics from Sam Cooke and Marvin Gaye. He’s more of a books guy and has talked up favorites including The Fire Next Time by James Baldwin and Master of the Senate from Robert Caro. 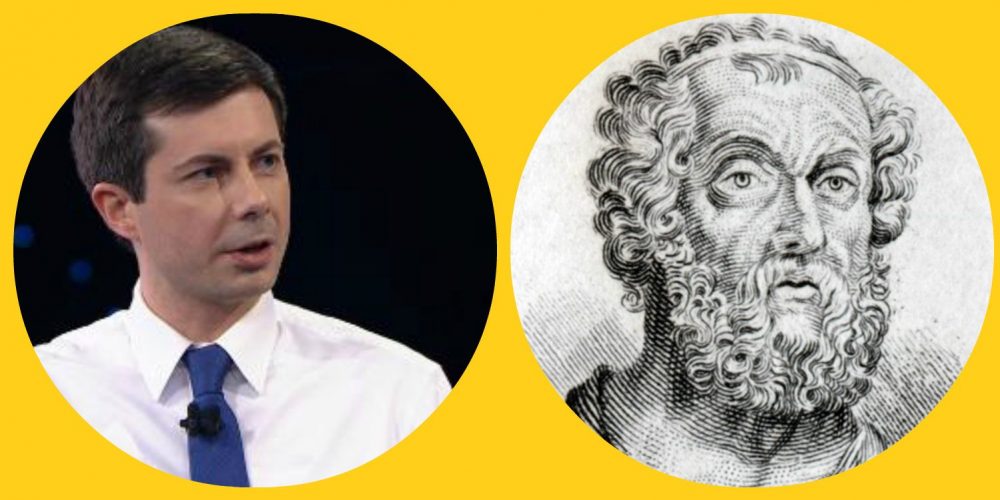 In 2003, South Bend Indiana Mayor Pete Buttigieg wrote an essay how Radiohead and Dave Matthews Band reflected the post-9/11 national mood. He still stans for Yorke and co., naming Hail to the Thief his favorite of the band’s records, as well as Phish and Spoon. When recently asked what books he would take to a desert island, Mayor Pete picked Ulysses and The Odyssey as well as Naive. Super by Erlend Loe, the Norwegian author who famously inspired Buttigieg to study the language.

When Senator Warren kicked off her presidential campaign, she picked Dolly Parton’s feminist anthem “9 to 5” as the theme song, which is a classic song by an American treasure, and we support the choice. Small problem: Warren didn’t actually get Parton’s permission to use the song. We reached out to the Warren campaign for comment on the Senator’s personal music, book, or film picks, but did not hear back, but we did find this endearing video clip of her having the best time hugging everybody at a Boston Pride parade, including Melissa Etheridge, who is a musician. 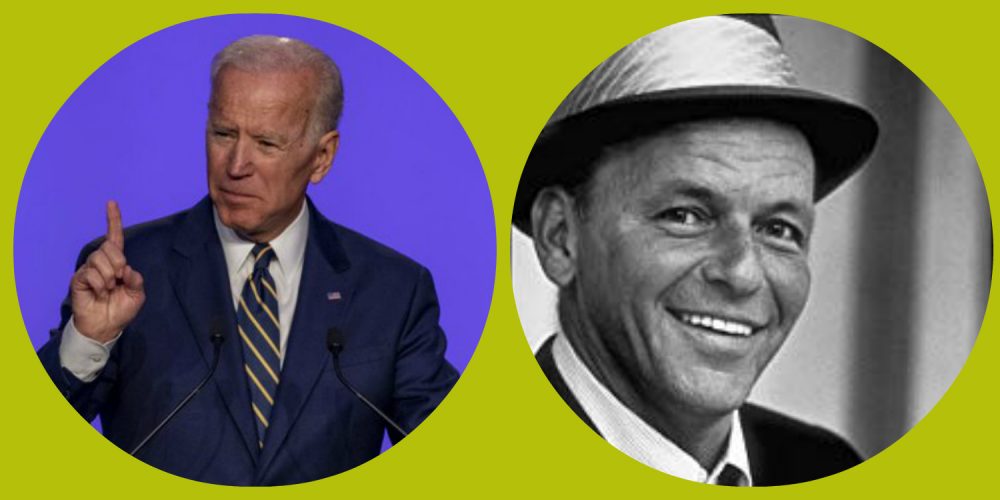 Ex-V.P. Joe Biden is less into “garage bands” than his literal garage, where he famously stores a prized 1967 Corvette which his father helped him buy as a young man. He’s also a big fan of Five Guys burgers, New Haven-style pizza, and the same pair of Ray-Ban aviator sunglasses he has re-bought over and over since taking a summer job as a lifeguard. In 2016, Biden and his wife shared their “summer playlist,” featuring hits from the Beatles, Frank Sinatra, and Rod Stewart.

Minnesota Senator Amy Klobuchar cites Tom Wolfe’s Bonfire of the Vanities among her favorite books. When it comes to film, she names The Sound of Music as her number one, and has been known to sing along to every musical number. She’s also a big fan of biking, once cycling 1,200 miles from Minneapolis to Jackson Hole, Wyoming. 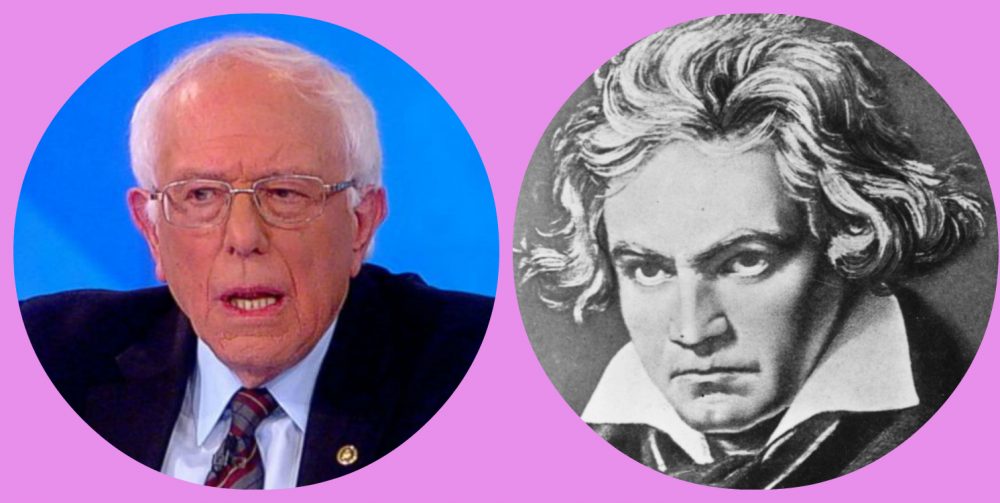 Years ago, Senator Bernie Sanders cut a direct-to-cassette recording of himself singing folk songs like “This Land Is Your Land,” but it didn’t get much in the way of praise (one publication wrote at the time that “he has absolutely not one musical bone in his body”). These days, when asked for his favorite music, he tells Rolling Stone that, “On my iPad, I have all of Beethoven’s symphonies.” When pressed for a more modern jam, he cited “the Motown sound.” When it comes to books, he has named Third World American by Arianna Huffington, Rebooting the American Dream by Tom Hartman, and The Millionaire Next Door by Thomas Stanley and William Danko as favorites. 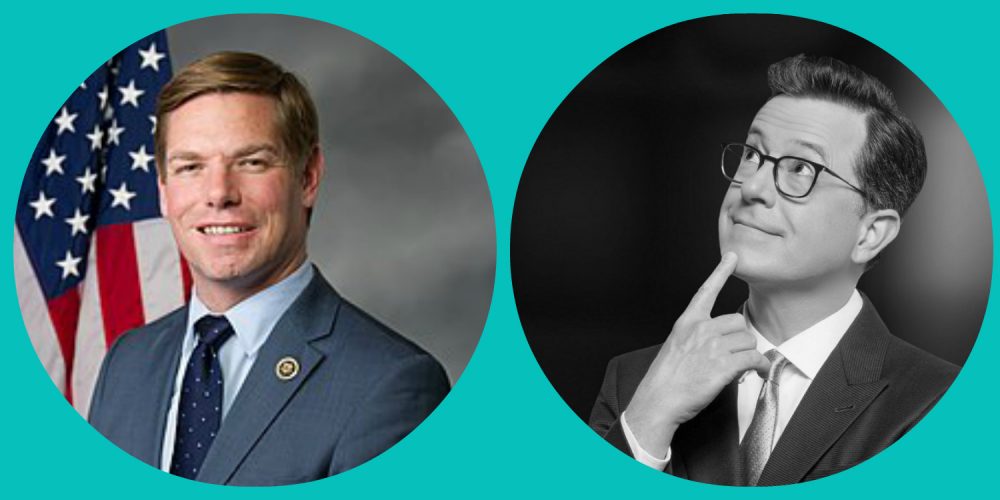 Back in the 1990s, when O’Rourke and Yang were going through their “alternative” phases, California’s Eric Swalwell was a golden boy soccer star and occasional hula dancer. Fast forward to 2019, and he officially announced his presidential bid on Stephen Colbert’s talk show, and did personally slide into Cardi B’s mentions when the singer posted an Instagram about looking into the various Democratic challengers. At the time of this writing, his Twitter feed featured the most frequent and natural emoji use of any candidate. 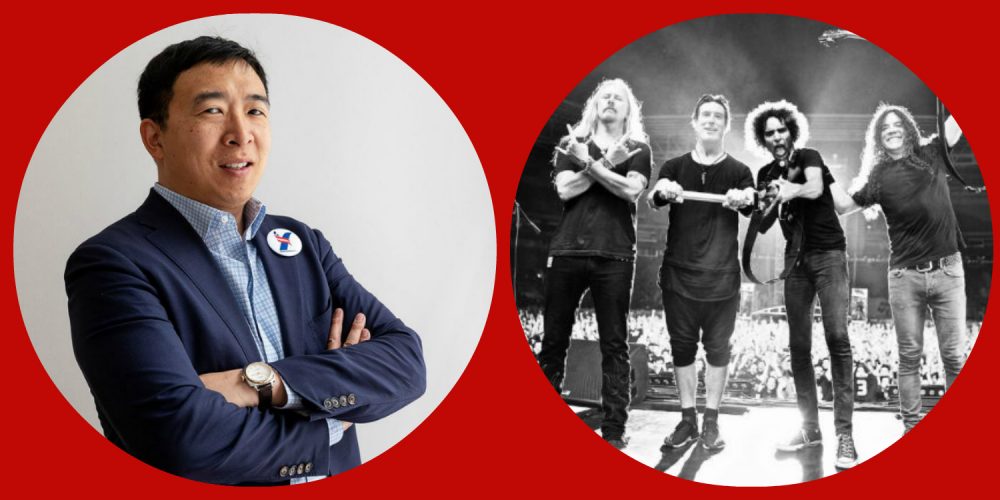 Andrew Yang has said that he identifies as “ex-goth,” and has listed ’90s music picks including the Smiths and Depeche Mode, but also Soundgarden and Alice in Chains (pictured). He claims to have attended three Lollapalooza festivals, and recently challenged Beto O’Rourke to a “skate-off.” 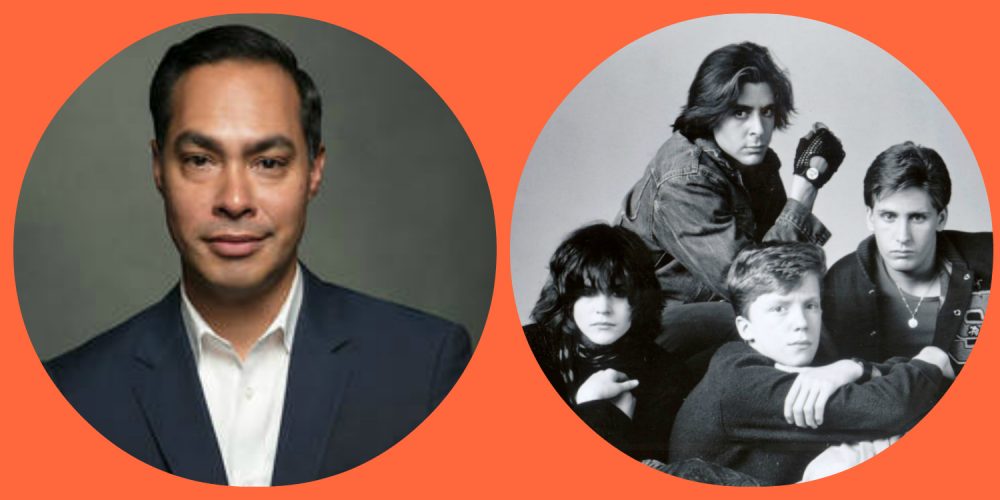 Julián Castro, a former San Antonio mayor and former HUD Secretary under Obama, has joked that his staff prefer him not to talk about his favorite music because they worry his faves–Jay-Z, Vicente Fernández, Joan Baez, and the Rolling Stones–skew a bit fuddy-duddy. He’s said recently that if ’80s flick The Breakfast Club comes on TV, he’ll always stop to watch, and his current reading material goes back and forth between The Road to Camelot, the 2017 tome about JFK, and the Harry Potter books he’s reading along with his daughter. Though his mother was a noted Chicana activist in Texas, Castro didn’t grow up speaking Spanish; his friend, actress Eva Longoria, has been known to send him language tapes to practice. 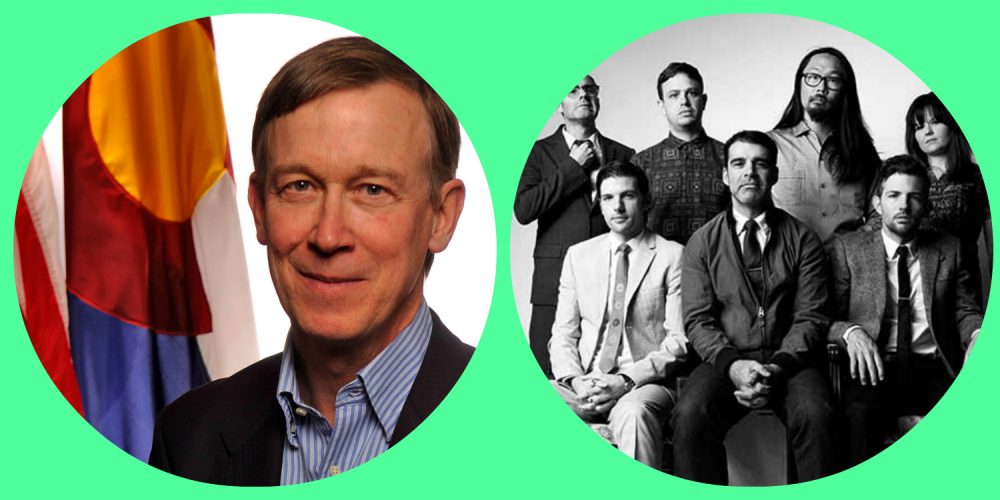 Former Colorado governor John Hickenlooper’s hobbies include drinking beer and recalling having sex with various women, as documented in painful, awkward detail in his 2016 memoir. When he’s not too busy with all that, he’s been known to play a little banjo, hopping on stage at music festivals and concerts to play alongside Old Crow Medicine Show or introduce the Avett Brothers (pictured) at Red Rocks. He’s also been spotted in the crowd at Colorado concerts, sometimes wearing a discrete hoodie, checking out the Shins, Lumineers, and Katy Perry. He never misses the Los Angeles band X when they play in Denver; he’s said John Doe is one of his favorite musicians of all time.

Hit the karaoke bar with New York Senator Kirsten Gillibrand and you might hear her belt out Aretha Franklin’s classic “Respect,” according to Bustle. She’s a fan of coffee ice cream and, we’re told, New York-style pizza, though surely she’d be booted from office for expressing any other regional ‘za preference. In 2018, when other candidates were probably prepping their self-aggrandizing pre-campaign autobiographies, Gillibrand instead penned a children’s book, Bold & Brave: Ten Heroes Who Won Women the Right to Vote, illustrated by acclaimed artist Maira Kalman.