Home Celebrity How a New Batch of Apps Is Boosting the Profiles—and Fortunes—of Unlikely... 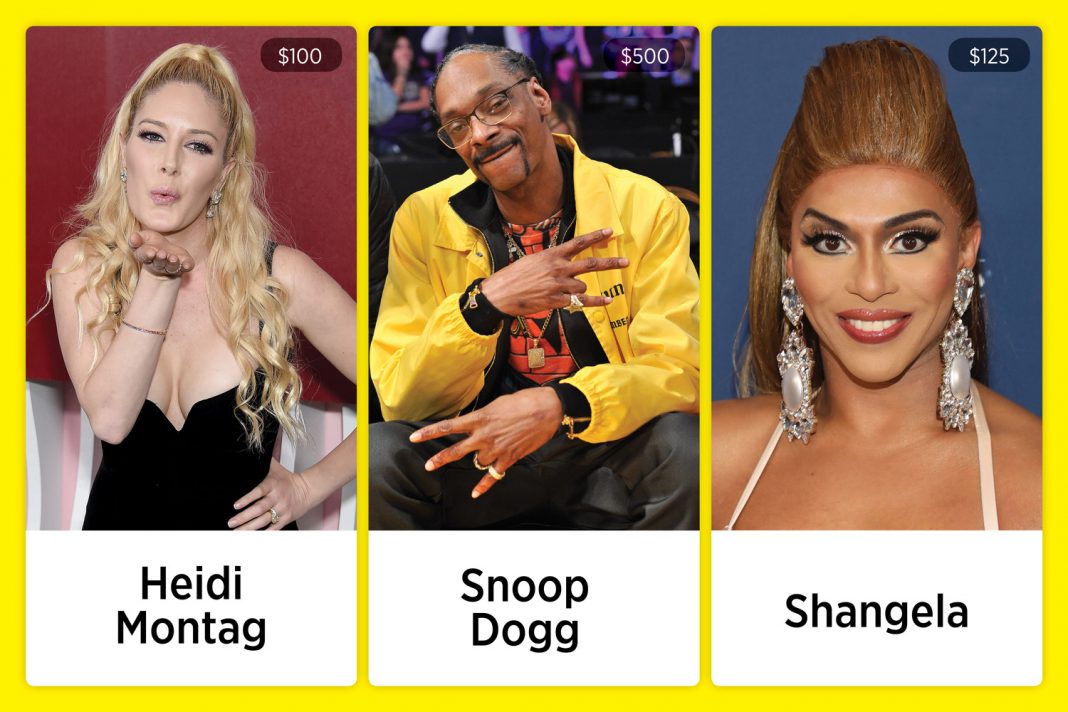 Jason Shapiro has a strangely amusing new hobby. For the past few months, the 33-year-old has been booking C-list celebs through the Cameo app to make short videos in which they say random things he comes up with. He estimates that he’s spent $50 to $75, paying people, most of whom he’s never heard of, $2 to $5 a pop.

“It just makes me happy,” enthuses Shapiro, who lives near the Beverly Center and works in social media. When fantasy football season starts, he has plans to hire James White ($200) from the New England Patriots to trash-talk some of his friends. “The accessibility is really cool,” he says.

A-list celebs have long made themselves available to perform for the very rich and famous—and sometimes morally dubious— for a steep price. Beyoncé reportedly made millions putting on a show for Muammar Gaddafi’s son, while Kanye raked it in performing at the wedding of the Kazakhstan president’s grandson. Cardi B took home an estimated $500,000 for werking it at a New York bar mitzvah. But even far-lesser luminaries are now enjoying a brisk business on celebrity-for-hire platforms like Cameo, Charitybuzz, and Starsona.

“People who aren’t getting in front of their fans all the time are falling behind and are not as relevant,” says Cameo’s 31-year-old cofounder and CEO, Steven Galanis. “It’s not enough to just be in Entertainment Weekly.” In late 2018 the company, which has offices in Chicago and Venice, raised $12.5 million, led by Lightspeed Venture Partners, which also funded Snapchat. It now has roughly 80 employees, up from 22 at the start of 2019. “We’re growing really quickly,” says Galanis.

Cameo launched in 2017 with a focus on lesser-known professional athletes. Now it has roughly 10,000 talents on offer, an eclectic assortment of athletes, Real Housewives, influencers, drag queens, Insta-famous pets, and lower-wattage Game of Thrones actors. Nearly everyone—from Ken Bone ($20) to Vladimir Furdik, who plays the Night King on GoT ($100), to Piglet, the deaf, blind, pink puppy ($25)—can be had for a price.

Celebs typically sign up on their own, and they set their own rate. “We tell people to charge a price where they can do as many of them as they want to do without getting overloaded,” says Galanis. “Most of these people could probably charge far more on a one-off basis.”

Users submit requests for what they want the talents to say, and roughly 85 percent are completed, according to Galanis. Requests often refused are typically small businesses gunning for an ad on the cheap. Some of the most popular hires include Caitlyn Jenner ($2,500), Snoop Dogg ($500), and actor Michael Rapaport ($150). “We’ve had some people do 500 videos in a day,” says Galanis, who claims that there are dozens making six figures on the platform, and some are on track to make more than $1 million. “They’re really getting paid to become more popular.” And they’re having fun doing it.

“I genuinely enjoy making these videos,” says blogger Perez Hilton, who charges $28.99 and has made over 2,500 messages.

Marla Maples ($84) also appears to be having a good time. She recently delivered a cheery-but-winking message to Shane Bouvet, the Illinois man who worked on Donald Trump’s campaign and received $10,000 from the president for his cancer-stricken father. “I’m really looking forward to reading more about how you came to spend time with my daughter’s daddy,” she says saccharinely.

Some of the stars and their videos have a whiff of good-natured desperation about them. A rough-looking Andy Dick appears in Christmas PJs, asking fans—“if I still have any”—to hit him up. Another Cameo talent, Charlie Sheen, once made $1.25 million an episode on Two and a Half Men; more recently he did a Mother’s Day message for Mama Bad Knee aka Linda for $250.

The site logs searches to keep track of nonparticipating stars that users are looking for. David Dobrik, a 22-year-old YouTube personality whose vlogs showcase his friends’ shenanigans, is the most requested person Cameo hasn’t secured. But Galanis thinks Dobrik, who was born in Slovakia and is now based in L.A., will join at some point. Other people he’d love to sign up include Elon Musk and Barack Obama. “[He’d] be amazing,” he says of the 44th president.

While Cameo is the buzziest of the celeb marketplaces, it’s not the only one. Ironically Galanis says his company initially saw Fyre—the celebrity-booking app that led to the ill-fated Fyre Festival—as its main rival, though Fyre was focused on bigger stars.

Fyre is, of course, no longer, but Ja Rule, who cofounded it with notorious huckster Billy McFarland, recently launched a seemingly similar platform called Ice Connect, or ICONN for short, with participating stars like Ashanti and Blac Chyna. (A statement on the website vehemently denies any connection to Fyre.)

Then there’s Starsona, which launched in mid-2018 and operates in a very similar manner to Cameo. “Obviously the concepts are identical,” concedes Starsona’s head of marketing, Brian Fagan, who says development began before the launch of Cameo. Cofounder Randy Kessler is a high-profile Atlanta divorce lawyer, and a number of the people on offer are athletes from that area, such as retired boxer Evander Holyfield. The one key difference from Cameo is that users can send talent a video question to respond to, like asking Holyfield how to perfect their jab.

Other platforms focus on the charitable potential of celeb hookups. Charitybuzz, founded in 2005, auctions off various experiences with A-listers, such as an acting lesson with Amy Adams or lunch with Jon Hamm, with the money going to various causes. Its sister site, Prizeo, functions more like a raffle, with users paying relatively small amounts for a chance at an experience, say $50 to be entered to win a selfie with Steve Carrell or $10 for a shot at meeting Third Eye Blind in Las Vegas.

“A lot of [charitable] organizations who have access or relationships with celebrities turn to us … to really take advantage and capitalize on these relationships,” says Charitybuzz president Ben Erwin. “They’re sitting on so much gold.”

It’s not only movie stars that rake in the cash. Apple’s Tim Cook is a top earner. In 2013 a coffee date with him went for $610,000, and in the years since, other Cook encounters have raked in similar amounts. “At that time we weren’t aware that business leaders could command such a high dollar amount,” Erwin says. Now the “business experiences” vertical is the company’s top performing category.

While founders of these platforms speak of them as win-win propositions, things can go wrong. A number of Cameo stars, including Brett Favre and Soulja Boy, have reportedly been duped into recording coded anti-Semitic messages for white supremacists.

Hollywood talent reps, meanwhile, are divided as to whether these services are entirely beneficial. Mark Pogachefsky, the president of MPRM Communications, has some reservations about what it might do to a star’s image. “Maybe it’s old-school, but there’s still something to be said for a bit of mystique,” he says.

Another industry publicist, who asked to remain anonymous, is more gung-ho. “It’s another great way to make money,” says the publicist, who mentions a Broadway client who was able to generate significant income between shows. And she’s not really concerned about how it might affect someone’s public image, saying, “It’s exciting to see where this will lead.”

Galanis is also enthusiastic about the future. Cameo is making plans to expand around the globe in a bid to attract international talent. “Imagine what this could look like in Bollywood or South Korea,” he gushes. “Our only competitor right now is inertia and the old Hollywood mind-set of limiting exposure. We fundamentally believe that the more content you are putting out there, the more popular you become.”