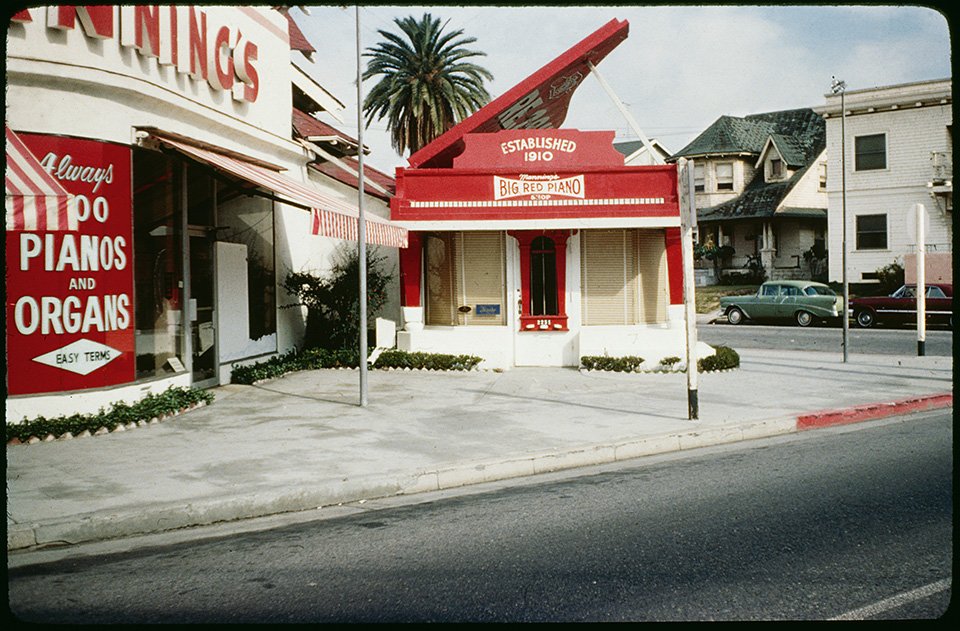 If you cruised the streets of Los Angeles in the mid-20th Century, you would have spotted giant hats, dogs, owls, oranges, and pianos along the side of the road—and it would have seemed perfectly normal. Back then, fun buildings designed to look like specific things were a popular form of advertising.

The style, known officially as programmatic architecture, and other trends for fanciful buildings—think Egyptian or Mayan-inspried fantasy buildings, faux-Tudor villages, diners, dinosaurs, and whatever you want to call what Clifton’s is—is the subject of California Crazy: American Pop Architecture, a book of photographs, curated by anthropologist, historian, and TASCHEN America executive editor Jim Heimann.

Heimann will be appearing on July 21 for a book signing at Idle Hour in North Hollywood. The bar makes a fitting backdrop for the event, as it’s a restored vintage programmatic building itself.

In advance of the reading, we asked Heimann a few questions about his new book, and the bygone days of “California Crazy” style.

What is “programmatic architecture”?

Programmatic architecture is really an academic architectural term that was given to this architectural type by David Gebhard 40 years ago. This means it is a programmatic approach to building design, where the building mimics what is being sold in the building. As Gebhard put it, “The vocabulary employed in these buildings hinged on a program organized to convey meaning not directly but by indirection.”  There are several more common descriptions for this type of architecture that are less academic, such as Pop Architecture and Mimetic Architecture. [ed. note: Gebhard’s essay, “A Lasting Architecture,” is reprinted in California Crazy]

Why caused this style to flourish in California, and particularly around L.A.?

There was a perfect storm of various elements that made these structures so popular in the Southland. The car is definitely a primary factor well as the developing landscape of Los Angeles, which was comprised of a central downtown connected to various satellite suburbs by lots of roads and a lot of open space.

Driving down the roadside these buildings could advertise what they were selling as the customer was going 30 miles an hour down the street. This was very different than shopping on a traditional main street on a sidewalk, so these business owners had to grab your attention in a new way.

Hollywood certainly affected their development by lending an air of fantasy with sets visible from the road, and cinema art directors being responsible for creating some of these buildings. The climate also helped. You don’t need to build these structures to withstand heavy weather, and so materials such as chicken wire, 2×4’s and stucco sufficed.

What would you pick out as some L.A. buildings that were really emblematic of “California Crazy” building?

Of the buildings from the era that haven’t survived, which one would you have picked to save, if you could?

The Pup Café on Washington Boulevard. By the way, rumor has it that the Tail o’ the Pup is destined for restoration, and to be located somewhere soon in Hollywood.

Why do you think people stopped building these types of structures?

Their popularity waned because of changing tastes and rising real estate values. That said, the tradition has continued over the years (see Dr. Satey’s Pediatric and Adolescent Clinic in Lancaster, built in 2017) though not as robust as the golden age, which was from approximately 1925 to 1945.