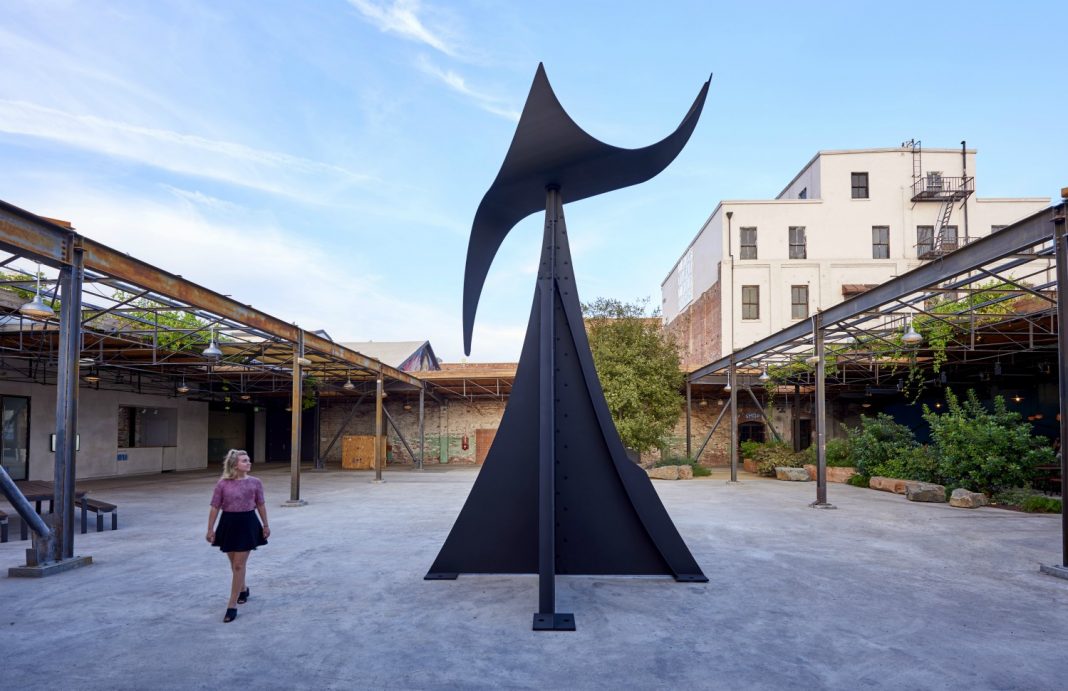 Sculptor Alexander Calder can seem like a quintessential East Coast artist. Born to Francophile parents on the edge of Philadelphia, in a stone house with four chimneys, his story includes a youthful breakthrough in ‘20s Paris, pivotal shows at New York City museums, and a farmhouse in a rustic corner of Connecticut. Calder’s coordinates, then, appear typical of American cultural figures born around the turn of the century, whose journeys took place mostly on either side of the Atlantic.

But when Calder was young—age 8 to 11, approximately—he lived in a house with orange crates as furniture; his parents collected Japanese prints. The land around him was sunny year round, and he recalled the sidewalks around him as brand new. These early, Pasadena years of Calder’s, from 1906 to 1909, are not thought or spoken about very often but Calder: Nonspace, a new show of his work at Hauser & Wirth in downtown Los Angeles, makes the period resonant again.

“Part of what makes this a hidden history is that his parents saw themselves as East Coast artists,” says art critic Jed Perl, whose first of two volumes of biography, Calder: The Conquest of Time, came out last fall. The parents saw their California years as an anomaly, but for their son they were formative.

The Calders came West because the artist’s sculptor father, Stirling, had contracted tuberculosis and needed a warm, dry spot. The Philadelphia they’d left was a sophisticated old city that had perhaps the nation’s most developed art scene outside New York. “Pasadena was raw by comparison,” says, Perl. “It was the Wild West in a sense—that’s how it struck Calder and his sister growing up.”

But Pasadena was also developing a serious cultural and intellectual scene that included the Arts and Crafts movement and the larger bohemia of “Arroyo Culture.” Intellectuals debated notions derived from British utopian socialist William Morris; artists strived for the simplicity of medieval artisans. Greene and Greene’s Gamble House would go up during the family’s last years here, and the California bungalow would see its heyday begin right after. There was an open, experimental quality to life here that wasn’t seen on the Eastern Seaboard.

Calder was a bright, sensitive kid, alert to the changes around him and attentive to the Arts and Crafts crowd his parents mixed with. He set up his first studio in the basement of the family home on Linda Vista, and created two important sheet-metal sculptures—Dog and Duck—in Pasadena or soon after departing. Both show the seeds of his mature style as well as the region’s Craftsman aesthetic.

“I think he was directly or indirectly influenced by the Arts and Crafts metal workers his parents were crossing paths with in Pasadena and L.A.,” Perl says.

In some cases, the influence of those years on his later work was quite literal: Calder’s trip to the Tournament of Roses Parade inspired a circus Calder designed two decades later. Other times, the influence was more general: The crisp, clean lines of Calder’s famous mobiles chime with the pared-down Craftsman visual style, as well as its political program. Perl explains, “The Arts and Crafts fervor of getting away from the machine and the impersonality of industry, getting back to the artisanal—that’s in everything he did.”

Though his family moved back East around the time Calder turned 11, the imprint was permanent, Perl says. “One of the mysteries of Calder’s career is that he moved to Paris in 1926, and within four or five years he’s regarded as one of the most important abstract artists around.” It only makes sense, Perl says, if you understand that “in his youth he imbibed Arts and Crafts ideas.”

Despite the prime of his life being spent in Europe and the East, there’s a larger, mostly uncovered West Coast story to Calder’s life, says Perl: The sculptor went to high school in San Francisco, and decided to become an artist during a brief period working at a logging camp in Aberdeen, Washington.

But Calder’s art was, during his life and after, most often displayed and collected in the old capitals of Europe and the East Coast: the Museum of Modern Art, the National Gallery of Art in Washington, museums in Paris and Madrid. One major exception is the 2013-’14 Frank Gehry-curated show at the LACMA, which Perl says, “may be the most beautiful ever made of Calder’s work.”

So there’s something both ironic and appropriate to Calder returning to Southern California, especially in a downtown L.A. gallery that was once a 19th century flour mill, in a neighborhood that was once largely industrial. (The show includes five large-scale sculptures displayed in the gallery’s courtyard, as well as smaller pieces indoors.)

“Most architects and city planners,” Calder told a friend, “want to put my objects in front of trees or greenery. They make a huge error. My mobiles and stabiles ought to be placed in free spaces, like public squares, or in front of modern buildings, and that is true of all contemporary sculpture.”

Perl thinks Calder would have enjoyed the grit and density of 21st century DTLA. Throughout his life, he says, Calder tried to be alert to social and cultural changes, and the art they made possible. “The crazy, multicultural, high and low mixings of L.A.,” Perl says. ”I think Calder would have loved that.”

RELATED: If You Love Pasadena, This Book Will Make You Love It Even More