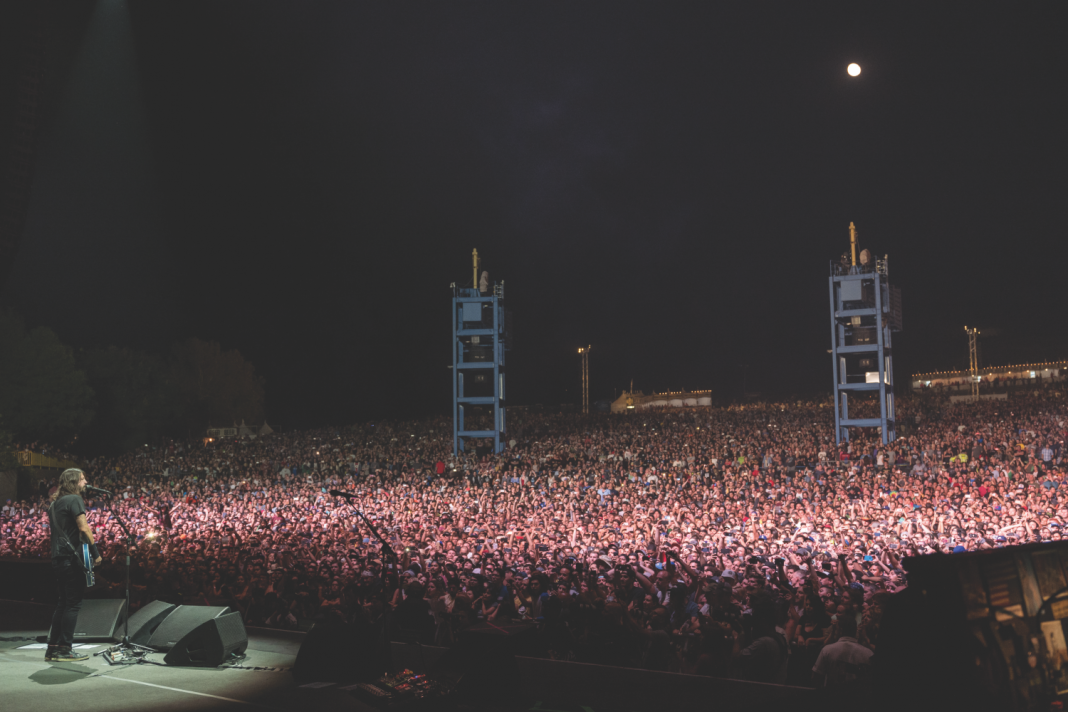 In 1974, the California Jam festival swept through the Inland Empire like a tornado. Black Sabbath connected its gear to the largest sound system that’d ever existed. Deep Purple’s amp exploded. Keith Emerson played a hovering grand piano that spun end over end. Despite nearly matching Woodstock’s attendance, the historic guitar’nival burned out after a lone sequel; but on October 5 and 6, a resurrected version plays on at Glen Helen Regional Park near San Bernardino. As the new Cal Jam enters a second year, its founder curators—the Foo Fighters—balance that fiery rock spirit with, well, “fun for the family,” as drummer Taylor Hawkins puts it.

Cal Jam ’18 serves up requisite performances from the Foos, Tenacious D, Garbage, Iggy Pop backed by members of Queens of the Stone Age, and a dozen-plus others, but it also caters to a broad, all-ages audience by offering a comedy tent, carnival rides, and midnight movies. The sum total of which befits a maturing band like Foo Fighters. “We’re not quite the Eagles yet, but we’re, like, classic rock now,” says Hawkins, 46, in his undying Laguna drawl. “We’re elder statesmen.”

Still, while the band’s collective child tally is well into the teens, some things don’t change. The detail that most sets Cal Jam apart from the glut of modern music festivals is that it celebrates rock pretty much exclusively. “It’s not like if you’ve got a drum machine on your album you’re not invited,” says Foos bassist Nate Mendel, “but there’s not a lot of computers.” And the demand is there: Cal Jam ’17 started as a blowout record release show for the Fighters album Concrete and Gold and snowballed into an accidental fest that drew 30,000 fans.

Hawkins knows this could all seem a bit Make America Shred Again—“My 11-year-old doesn’t give a flying fuck about rock; Lil Pump is his rock, and I don’t want to take that from him,” he says—but he’s proud to be in one of the last-standing stadium bands. His rowdiest days are behind him, but he still rolls with a crew who’ll likely live up to Cal Jam’s legacy. “When everyone brings their kids, it’s chaos!” he says. “They’d beat any of those old bands at destroying a backstage.”