Home Uncategorized By Leaps and Bounds 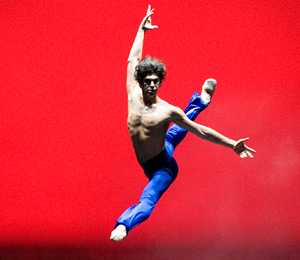 Artistry and technique: When both elements are working in harmony, when a dancer has mastered these facets of his craft, then the result looks something like the recent two-night engagement of Kings of the Dance at the Ahmanson Theatre. The North American premiere of this three-act performance, featuring the best male classical dancers in the world, set a standard of accomplishment that is not often seen gathered together on one stage.

The focus was on the men—literally, as the expert stage lighting made clear—who executed choreography by (no surprise) some of the best in the business: Christopher Wheeldon, Sir Frederick Ashton, Roland Petit, Dwight Rhoden, and Nacho Duato, among others.

Matvienko was especially entertaining in the pantomime-laced Vestris, first performed in the 1960s by Mikhail Baryshnikov. De Luz made a powerful impression with his precision, energy, and athleticism in Five Variations on a Theme, set to music by Bach. Richardson, a onetime Alvin Ailey principal, gave muscle control new meaning in a spectacular, dramatic piece called Lament. Other highlights included Hallberg’s fluidity in the rare Ashton work, Dance of the Blessed Spirits, Gomes’s strength and Côté’s lyricism in the evening’s centerpiece pas de deux, and Carreño’s steady, solid lines in Ave Maria.

When there are seven kings instead of one, you might think professional rivalries would threaten the integrity of the program. Instead, as a post-performance discussion revealed, these kings have become comrades—spirited, dedicated, and quite humble.