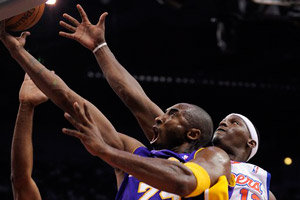 A Phoenix Suns fan, I’m not inclined to like the Lakers. But the Clippers are a team I can fully support guilt-free, so I’ve adopted them as my team since arriving in town this month. When I was invited to the Lakers vs. Clippers game on Sunday, I was pumped.

Still, I had resigned myself to a possibly painful loss at the hands of the masterful Lakers. But this game was different. It was a battle right from the start.

The Clippers, fresh off their surprising win over the Miami Heat, kept the game close. The lead flip-flopped between the teams, keeping everyone on the edge of their seats.

My friend said she’s never heard Staples Center so conflicted. Any time a player from either team went up to shoot a free throw, a combination of boos and cheers rose from the crowd.

With 24.8 seconds left in the game, the Clippers were up by seven points. I could almost feel the electricity that was about to fill the center. That’s when my ride decided it was time to go. A guest, I didn’t have room to argue. I dragged my feet on our way out, cheering down the escalators because my team was winning against all odds.

Unfortunately, the Clippers’ victory wasn’t the most exciting thing that happened Sunday afternoon. Five seconds before the final buzzer Lamar Odom and Blake Griffin’s tough play spilled over into a war of words between Odom, Griffin, Baron Davis and Ron Artest. All four players involved in the scuffle were ejected.

An exciting game became an unforgettable one behind my back.

I was told that by leaving 24.8 seconds early we’d save 45 minutes in traffic. Maybe I haven’t sat in enough L.A, traffic yet, but it wasn’t worth it. Watching the dust-up on YouTube just wasn’t the same.