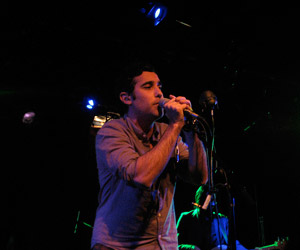 If there was a dress code for Joshua Radin at the Henry Fonda Theater last Wednesday night, I wish I had known about it. Radin, perched on a bar stool in the center of the stage, wore a red plaid button-down—and so did almost every other male in attendance, albeit in different colors. Each of their dates donned a knit beanie or fedora and skinny jeans. Now I know.

I attended the show with no real expectations, having struck out with Regina Spektor tickets and settling for Radin’s show instead. I had heard two, maybe three of his songs before, and was familiar with several others through TV shows like Grey’s Anatomy and Scrubs that have featured his music (Actually, “Winter” cues up during an emotional scene in almost every single season of Scrubs). I was pleasantly surprised by his mellow set; his voice sounded clear and raw, his stage presence quite impressive for an artist who began writing music less than five years ago. He personalized the show by chatting with the audience, reproaching us at times for not joining in and singing along (apparently “even New Yorkers” sing).

Overall, it was a nice way to spend my Wednesday evening. Radin navigated through his 17-song set with ease, pausing briefly between songs to tell a story or joke around with the audience. Though he spoke several times about being single, his lovey-dovey songs spoke to the couples in attendance. I noticed quite a few of them embracing during “Closer” and “What if You,” among others, which brings me to the second thing I learned about Joshua Radin concerts: bring a date.