Home Film Mick Jagger Is Sly as a Shady Art Dealer in ‘The Burnt... 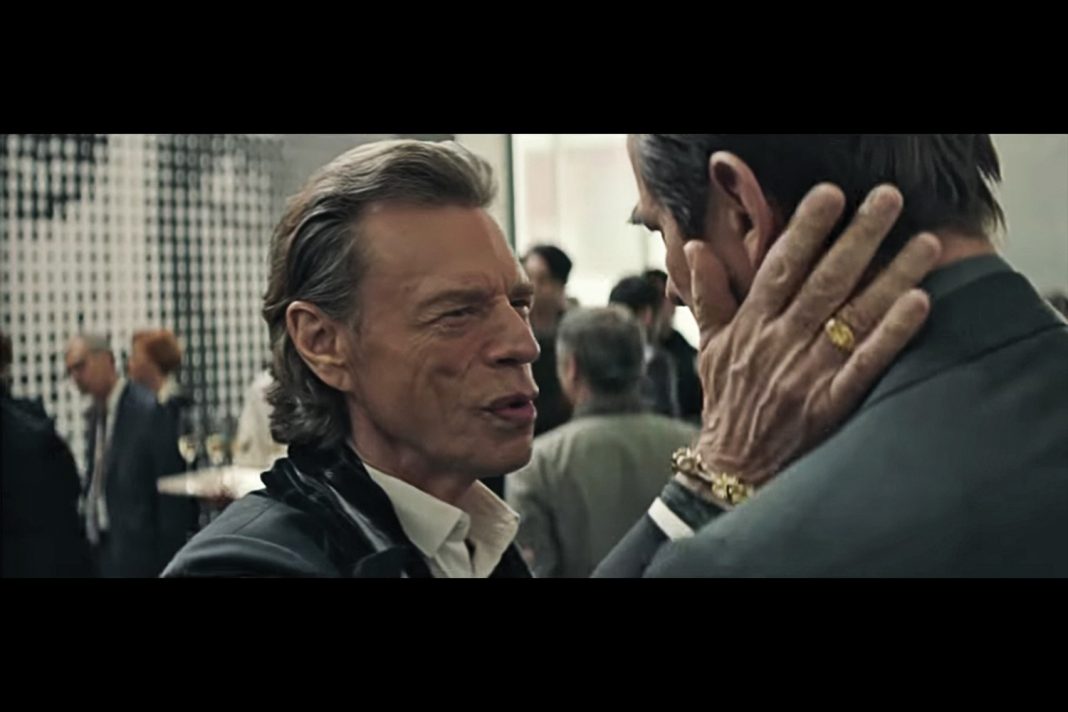 My rare adventures in Hollywood include a pitch I made to a producer some 20 years ago to adapt a novel called The Burnt Orange Heresy. Its author, Charles Willeford, was the Philip K. Dick of crime fiction, quietly revolutionizing the genre while few paid attention, shifting the genre’s concerns from the usual mysteries of who did what and how to what’s the nature of immorality and what remains true even if no one knows. His eccentric books are laced with oddball humor and motivations even the characters don’t understand. Underlying everything is the writer’s bemusement at the myriad ways people mess up their lives, with his focus never entirely on the center of a scene but always drifting to its edges.

The Borgesian enigma at the core of The Burnt Orange Heresy is a world-famous painter whose paintings may not exist. Sounded like a pretty good picture to me, taking into account that two of Willeford’s novels, Cockfighter and Miami Blues, already had been made into films (with Alec Baldwin giving one of his earliest and best performances in the latter) and a third, The Woman Chaser, had just wrapped. The producer stared at me stupefied, calculating the moment most appropriate to laugh in my face.

That I botched my pitch is just as well. The adaptation of The Burnt Orange Heresy, now in theaters, from filmmaker Giuseppe Capotondi and screenwriter Scott Smith is better than anything I would have come up with, in part because Capotondi and Smith know the crucial secret of adaptations: when to remain faithful to the source and when not to. With a few variations, Willeford’s narrative remains. An art critic on the make played by the Danish actor Claes Bang, embittered by his own failed artistic aspirations and desperate for some kind of career breakthrough, gets an offer from wealthy art dealer Mick Jagger to score the only interview ever given by an aging, legendary painter so Pynchonesque in his reclusiveness that we’re left wondering if he’s real at all. Then he shows up as Donald Sutherland. Jagger’s hope is that, by hook or by crook, Bang in the process can also get his hands on a painting nobody has seen, since the rest of the artist’s work was destroyed by a fire decades ago. Notwithstanding possible howls of betrayal from fans of both Willeford’s stories and their humidity-crazed Florida landscape, Capotondi and Smith have had the good sense to set the film in the director’s native Italy (which, after all, is to painting what America is to rock and roll). Whereas in the novel the berserk Floridian swamplands heighten the unfolding surreality, in the movie the strange goings-on contrast with the stately countryside in a way that leaves us first unsuspecting and then all the more disoriented.

Capotondi and Smith’s most successful masterstroke, however, is the elevation of a relatively minor figure in the novel, a one night stand who’s along for the ride played by Elizabeth Debicki. Whether this is by virtue of the script and direction or whether it’s a case of Debicki bringing something extra to the role isn’t entirely clear. In any case she steals the picture, which takes nothing away from Bang’s sinister charisma or Sutherland’s old-world charm or even Jagger, who’s very sly in his role even if you can’t entirely forget he’s Mick Jagger. Debicki is smart, sexy, and haunted, with a more profound backstory than any of us can imagine—including perhaps the filmmakers.

Released at a more precipitous time, this would be a star turn by the Australian actress—maybe it is anyway—coming on the heels of her other star turns in The Night Manager and Widows. In a production that retains Willeford’s subversive commentary on the cluelessness of, uh, critics (including those who made bad pitches to producers) as well as on the capricious value we place on art for the flimsiest of reasons, Debicki relentlessly holds onto the real even as it becomes first an inconvenience and then a threat to the other characters.

The Burnt Orange Heresy recalls Alan Rudolph’s 1988 film, The Moderns, in which the signature on a painting has more currency than the painting, and you can forge your way to immortality. Almost inescapably we live in an increasingly bankrupt world where, like apparently everything else, art’s worth is measured by those with money, for whom the creative spirit isn’t a portal to beauty and the sublime but, first and last, an investment to be protected at all cost, including that of the spirit itself.

RELATED: Elizabeth Debicki Has Range—and She’s Not Afraid to Use It