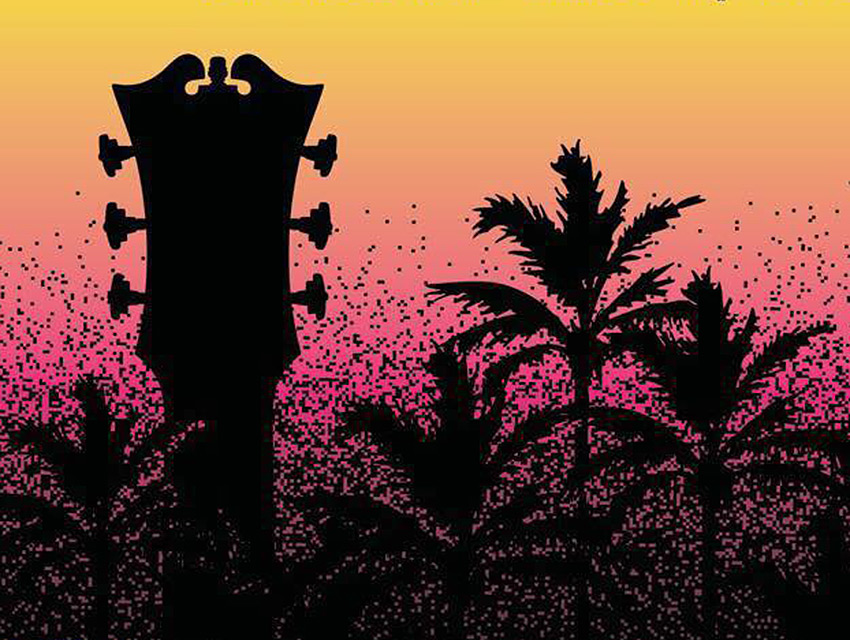 If you’ve never heard of the Malibu Guitar Festival—you know, the four-day musical smorgasbord featuring names like Kenny Wayne Shepherd, Robert Randolph, and Dale Watson—you’re not alone, but you better wise up fast. Only in its second year, the fest, which takes place April 28 through May 1, will see world-class musicians descend on the tony beach town for a celebration of all things guitar. “I’ve always wanted to do a music festival in Malibu, and the iconography of the guitar is so synonymous with Malibu,” Festival organizer Doug DeLuca says. “Every other household there has a guitar—whether you are a hack like me, or a legend like the Edge. From the surfer who’s got the beat up six-string, to the millionaire who’s got the super expensive guitar collection, it’s a unifying force in the community. It made sense.” DeLuca (who is a co-executive producer of Jimmy Kimmel Live! and a Malibu resident) along with partner John Watkin of Plant Grande Pictures had a vision to bring a music festival to the seaside town for philanthropic reasons while also showcasing legendary musicians alongside a slate of up-and-comers.

The list of performers on tap this year is a testament to the budding festival’s future: expect to see acts like Richie Sambora, Albert Lee, Laurence Juber, Orianthi, Randy Jackson, and bands like The Empty Hearts rocking out for charity and for the love of their craft. “I’m interested in doing this because I love Montreaux Jazz Festival,” music director Steve Ferrone—drummer for Tom Petty and the Heartbreakers—says. “It had a way of putting the oddest people together, and that’s what made the music interesting. I’d like to make it so the musicians have fun playing with each other outside their comfort zone, or basically just getting to play what they want to play. I always ask: ‘Is there anything you want to play that’s out in left field for you?’”

The Empty Hearts in particular embraces the ethos of the festival. Don’t call them a “super group,” but do recognize that the band is made up of Blondie drummer Clem Burke (one of Rolling Stone‘s 100 Greatest Drummers of All Time), The Cars guitarist Elliot Easton, The Romantics guitarist and vocalist Wally Palmar, and The Chesterfield Kings bassist Andy Babiuk, who like to “…just have fun with it and play the kind of music we grew up playing; the kind of music that reminds us of why we wanted to play music in the first place,” Burke says. “We are really happy about the festival—it’s going to be a good platform for us for a lot of people to get to know and hear our band that aren’t really that up on us.”

And while MGF is still in the fledgling stages, DeLuca has big dreams for its future. “The whole week leading up to it, everywhere you turn, the guitar has infiltrated all of Malibu,” he imagines. “Every restaurant and bar is activated with music; every park with a jam session; every beach with a guitar circle. It’s just this musical weekend, this musical destination. It’s all driven by community. All of our Malibu friends take this as their own. That’s the vibe we are trying to create, that’s where we are going.” Sounds like they are on their way.

Check out the festival schedule below, and head to TicketFly to buy a weekend pass or a la carte tickets to various events.

Thursday April 28, 7 p.m.: Opening night fundraiser at Casa Escobar (in the old Malibu Inn space). Most of the musicians who play over the weekend will do small sets, and all the money raised this night will benefit Mending Kids, Boys & Girls Club of Malibu, and Therasurf.

Saturday April 30, 12 p.m.-10 p.m.: The Main Event. Outdoor festival with two stages in the Cross Creek section of Malibu Village with food trucks, craft and guitar vendors, art galleries, and a kids’ corner. Oh, and if you don’t have time to get a workout in, SoulCycle will be on hand for some cardio parties amidst the musical madness.