Home Architecture Just Once a Year, the Public Gets a Chance to Explore This... 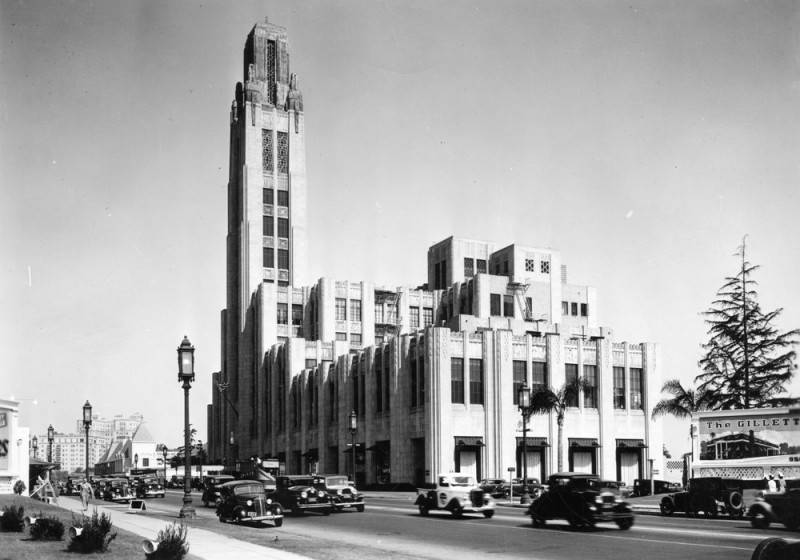 Bullocks Wilshire was Los Angeles’ most deliriously art deco department store for generations. The store sold its last fancy gown and slice of coconut cream pie more than 25 years ago–but the building will be open again for visitors this weekend.

The docent and self-guided tours sponsored by Southwestern Law School, which operates out of the restored landmark, only take place once each year–so be sure to book tickets in advance.

To prepare you for the rare public showing, we’ve put together a quick history lesson on why this old shop is still worth swooning for.

The first Bullocks department store opened at 7th and Broadway downtown in 1907, and was a cornerstone of the elegant entertainment district that thrived there for decades. In 1929, the company expanded to the far-flung suburbs of Wilshire and Vermont, with a magnificent new tower designed by architects John and Donald Parkinson, who also brought you Union Station and Los Angeles City Hall.

The store was famous for its service and amenities, with fashion shows, personal shoppers, and an elegant tearoom on the fifth floor. They wrapped gifts, they shined your silver, they had an elevator operator—it was incredible. Generations of Angelenos bought fancy gifts and special occasion clothes under the copper tower.

Shoppers at Bullocks’ downtown location would typically arrive on a streetcar, but customers at the new store–modern as it was–were expected to arrive in a private automobile, preferably chauffeur-driven. An innovative rear entrance near the parking lot featured deco ironwork and an epic ceiling mural. It was all designed to enhance the experience of this glamorous new temple of shopping–and the well-off customers of Bullocks ate it up.

Bullocks opened a third location in Pasadena after World War II (it’s still going strong today as a Macy’s) utilizing some of the lessons learned from the Wilshire store, and the chain expanded to the suburban malls of the 1950s, ’60s, and ’70s. Nonetheless, Bullocks Wilshire stood out as the flagship of glamour and elegance.

But by the 1980s, shoppers dwindled and a sort of stasis set in. Loyal customers grew old along with the store; shopping during those years felt like stumbling into a convention of kindly old grandmothers. In 1992, the building was damaged during the riots; while it wasn’t destroyed, the new owner, Macy’s, shut it down 10 months later, plundering the antique furniture and fixtures in the process.

The Los Angeles Conservancy pressured them to return the artifacts to designated Historic-Cultural Monument. The building then sat quietly until a new occupant was found. Longtime neighbor Southwestern School of Law purchased the tower the following year.

After an award-winning restoration, Southwestern moved its law library to the site, utilizing some spaces as mock courtrooms, and repurposing the tearoom as a cafeteria. Because it’s a functioning campus, unless you’re a student or teacher, the building is closed off 364 days of the year.

Donors passionate about the building’s ongoing care and restoration have formed the Friends of Bullocks Wilshire, and that group that operates this weekend’s tours.

RELATED: This Art Deco Gem of a Bar in Historic Filipinotown Is Slinging Swanky Drinks