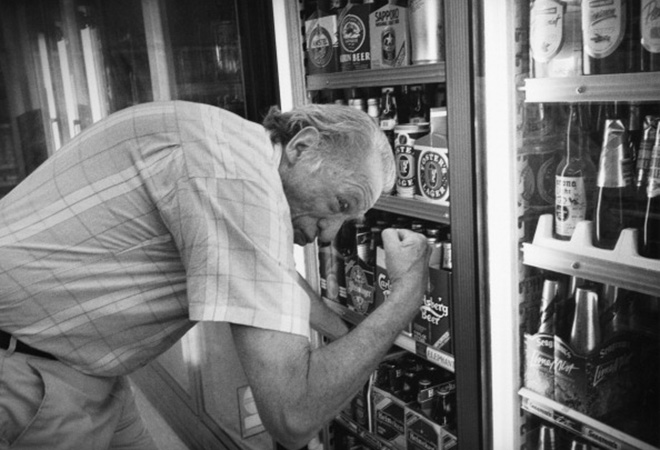 Twenty years after his death Charles Bukowski still has the power to draw an audience. The gruff poet and novelist, who reveled in the city’s seedier side—in print and in life—has inspired a bus tour, memoirs, and poetry by his ex-girlfriend. His fans recently stopped the demolition of the East Hollywood bungalow where he once lived and had it designated a historical landmark. And a couple of months ago Barkowski, a watering hole devoted to the postal worker poet, opened in Santa Monica.

From the Central Library and the Postal Annex Terminal to the Santa Anita racetrack, Bukowski’s novels and poems draw a map of L.A. Fans still travel from around the world to drive by the places he lived, visit the bars he frequented, and pay their respects at a small headstone in Palos Verdes with the outline of a boxer and two words: “Don’t Try.” Even the Huntington Library, about as far as possible from Bukowski’s milieu, recently put his poem “The Old Pinch Hitter” on display; the institution plans to rotate new items in every few months.

This Sunday, on the 20th anniversary of Bukowski’s death, admirers will gather at one of the author’s favorite watering holes to honor him. Poets and pals Dan Fante and Joan Jobe Smith will meet up at the King Eddy Saloon (which looks less divey than it did back in the day) for “an evening of poems, toasts and memories” sponsored by the Los Angeles Visionaries Association. They probably won’t be pouring the Portico Brewing Co.’s new Bukowski-themed beer, but the event, which is free, starts at 6 p.m. Bring your favorite Buk book and grab a glass—or twelve—of cheap wine.