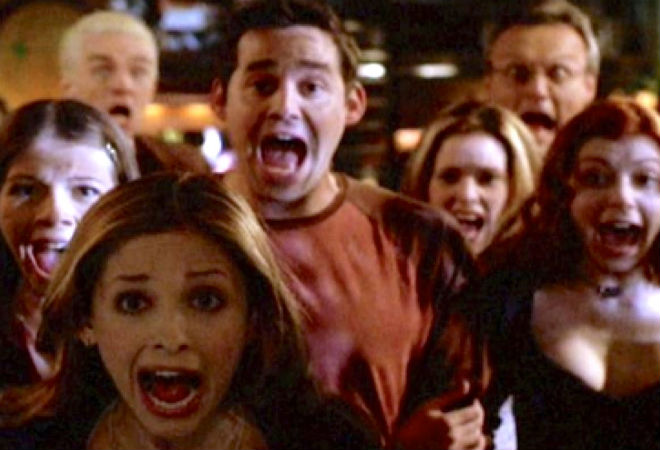 Quick, get in your time machine and set the dial to “1999.” When you arrive, seek out your teenage self (perhaps playing Dungeons & Dragons in a basement) and explain that one day in the future a burlesque show based on Buffy the Vampire Slayer won’t just be a fever dream.

On February 7, Peepshow Menagerie and Lusty Kitten Productions—a purveyor of themed burlesque shows that cover everything from David Lynch movies to naughty takes on Disney characters—host Across the Whedonverse: A Burlesque Tribute to Director Joss Whedon at Fais Do Do in West Adams. Whedon, whose recent work includes writing and directing Marvel’s The Avengers, hit it big in the late ’90s with a TV show about teenage angst, abusive boyfriends, and killing lots and lots of vampires, demons, and the occasional demi-god. Although Buffy the Vampire Slayer is widely regarded as Whedon’s magnum opus (thus far), he’s also responsible for Angel, Serenity, Cabin in the Woods, and Agents of S.H.I.E.L.D, an oeuvre that has spawned one of fandom’s most devoted and vibrant communities.

In addition to the promise of costumed burlesque, Across the Whedonverse will also offer some of the traditional mainstays of fan conventions such as merch vendors, fan art exhibitions, and costume prizes, not to mention a special appearance by comic book artist Georges Jeanty, who has worked on several Whedon adaptations.

Before you put on your Spike outfit (which can double as a Billy Idol costume for Halloween), check three of Whedon’s creations that don’t get enough attention.

This fan-favorite cult TV show, which ran on Fox for just one season in 2002, follows the travails of a band of intergalactic smugglers in the year 2517. In addition to Whedon’s trademark snappy dialogue, the show features strong performances from scifi mainstays Nathan Fillon and Summer Glau. The 2005 film adaptation, Serenity, featured a chilling turn from Chiwetel Ejiofor, nominated for an Academy Award this year for his performance in 12 Years A Slave.

Almost as if he had been eavesdropping on his fans’ fevered conversation, Whedon cast Buffy alum Eliza Dushku as Echo, a body-for-hire whose memory is wiped between assignments. While the show only ran for two seasons on Fox, it has enjoyed a long afterlife in the Whedonverse, generating a veritable Beinecke Library of fan fiction.

Much Ado About Nothing

This black-and-white adaptation of one of the Bard’s most beloved romantic comedies might seem like an odd choice for Whedon, but the film received almost unanimous praise from critics upon its 2012 release. Featuring a cast of largely unknown young actors (alongside some of the filmmaker’s favorite playes), Whedon’s take on Shakespeare’s comedy of courtship was shot at the director’s Santa Monica home. The marriage of Hero and Claudio has nothing on the wacky buddy comedy we’re hoping this project will generate in fan fic form: Joss & Bill’s Excellent Adventure!