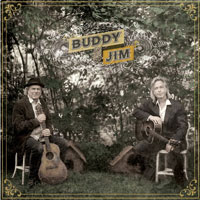 Buddy Miller has been a guitarist for Steve Earle, a record producer for Patty Griffin and Robert Plant, and a bandleader for Emmylou Harris. Jim Lauderdale has put out dozens of albums and his songs have been recorded by the likes of Vince Gill, the Dixie Chicks, Blake Shelton and George Strait. The two are old friends who met, strangely enough, playing country music in New York City in the early ‘80s. After that, they both lived in Los Angeles for a stretch with Jim renting a Beachwood Canyon home once owned by ’30s screen siren Dolores del Rio.

Lauderdale and Miller both live in Nashville and after years of writing for and playing on each other’s projects, they decided it was time to do something together. The result, Buddy and Jim, is a collection of duets with stellar harmonies and a rollicking combo of old school country and R&B. (2012 on New West Records)

The way Lauderdale tells it, his L.A. sojourn jumpstarted his career with his idyllic abode serving as a creative nexus. “That neighborhood to me had such creative vibes,” he says. The alt-country genre was taking off, clubs like the Palomino in North Hollywood were going strong, and musicians like Dwight Yoakam and Lucinda Williams were breaking out. As things got going for him, Lauderdale began commuting to Nashville; after trying to maintain homes in both cities, he finally let go of his hillside getaway.

Next Tuesday, May 14, he and Miller return to L.A. to play the Troubadour in support of their new album. Lauderdale is looking forward to playing a venue that holds so many memories. “It’s been a long time,” he says, “one memorable time was opening for Nick Lowe in ’95, and of course I’ve seen many shows there. To me, it is one of those revered, magic spots that you aspire to play at. It’s one of those exciting places that gets your adrenaline going. It means a lot to me to do this gig with Buddy because of our past in L.A.”