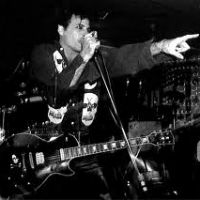 This week’s must-see L.A. shows run the gamut from soulful to aggressive.

Gary Numan – Wednesday, Oct. 16
You may remember Gary Numan for being synonymous with the 1980s single “Cars,” but he deserves to be known as more than a one hit wonder. The trilogy of albums that solidified Numan as one of the pioneers of electronic music (and for the commercial success of synth pop in the ’80s), are the self titled debut of the group he fronted, Tubeway Army, Replicas, and his first release as a solo artist, Pleasure Principal. These albums were a sci-fi, “man and machine”-inspired collection of songs that combined synth, punk, and pop. His most recent releases have gone in a heavy industrial direction, perhaps inspired by his friendship with Nine Inch Nails frontman Trent Reznor. In anticipation of his new record, Splinter, which comes out on October 15, Numan, who’s now an L.A. resident, will play three hometown shows this week. He plays a free show at Amoeba Records in Hollywood before two sold out gigs at the Hollywood Forever Cemetery.
Amoeba Records: 6400 Sunset Blvd., Hollywood; Tix: Free.

Little Dragon – Thursday, Oct. 17
Long before Yukimi Nagano became the front woman for Little Dragon, she was the teenage vocalist for Swedish electro jazz duo Koop. When that collaboration ended, Yukimi (along with her Gothenburg high school classmates Erik Bodin, Fredrik Källgren Wallin, and Håkan Wirenstrand) formed Little Dragon. The wide range and soft breezes of her voice paired with the band’s soulful electronic sound has catapulted Little Dragon to popularity with crowds flocking to their live appearances and festival appearances. The band has released three albums, each with a diverse range of influences. (They’ve been known to drive audiences into a dance frenzy by working Crystal Waters’ club classic “Gypsy Woman” into their live sets.) They have been hard at work recording their next album, so consider this a primer for what’s to come on their next tour.
El Rey Theater: 5515 Wilshire Blvd., Miracle Mile. Tix: $25.

Disclosure – Thursday-Friday, Oct. 17-18
Better known as Disclosure, U.K. dance sensations Guy and Howard Lawrence put out their debut album Settle in June and it quickly garnered attention for its deep house sound—electronic music with melodic keys and soulful vocals. It is a one of those records that you can play from start to finish and it has no dead space. The Lawrence brothers partnered up with a list of the UK’s finest for vocal duties: Sam Smith, Aluna George, Eliza Doolittle, and Jessie Ware. That helped it get the sort of radio play that would eventually make it the #1 album in their native UK and #2 on the U.S. dance charts.
The Fonda Theater: 6126 Hollywood Blvd., Hollywood; Tix: $25.

Les Nubians – Saturday, Oct. 19
International recording artists and sisters Hélène and Célia Faussart aka Les Nubians started out as a capella singers and eventually develop a sound that fuses hip hop, neo soul, and “Afropean” music. In America, they were received a Grammy nomination for their single “Makeda.” Frequently compared to Floetry and Erykah Badu, the Parisian duo has even covered the Sade classic “Tabou.” They have been making plenty of stateside appearances in support of the soon-to-be-released Nu Revolution album.
Luckman Fine Arts Complex: 5151 State University Dr., Los Angeles; Tix: $30-40.

TSOL, The Dickies, The Vandals, Duane Peters – Saturday, Oct. 19
Rob Zombie’s Great American Nightmare is a combination of three haunted houses and a live concert. It runs Thursdays thru Sundays at the Pomona Fairplax until Nov. 2 with a different concert each night. You can’t find a better way to release your aggression and fear after coming out of a crazy haunted house than jumping into the sounds of some fine So Cal punk bands. OC’s essential gothic punkers TSOL are widely known for their chaotic live shows; mix that with lead singer Jack Grisham’s knack for inciting crowds to riotous levels and the mayhem that Halloween can produce, and their set should be unmissable. Formed in LA in 1977, The Dickies have always incorporated a humor their lyrics and live shows. The Vandals and Duane Peters round out the night.
Pomona Fairplex: 1101 W. McKinley Ave., Pomona; Tix: $30-50.