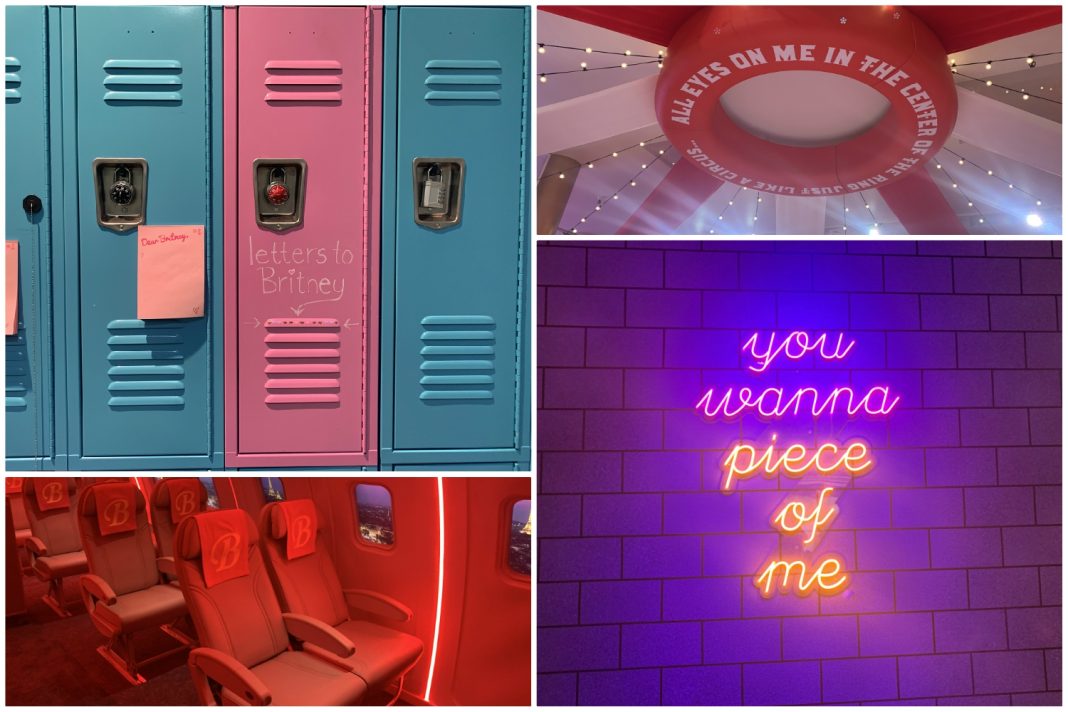 What was once a Kmart situated directly across from the Grove on 3rd Street is now a one-of-a-kind pop-up experience catering to pop star Britney Spears’s extremely rabid fanbase. The building’s facade has been painted a wild shade of purple, and a mural by Rob Prior features two outsize renderings of Spears peering at traffic as it passes by. Inside, Britney’s career (er, through 2008) is laid out across ten rooms themed to the pop star’s iconic music videos, many of which premiered when music television was still a thing.

Jeff Delson and Shannon Ramirez, the masterminds behind the Zone (opening to the public January 31), began creating the pop-up experience about two years ago to allow fans to live Spears’s career. According to them, Spears is “excited” about it and “fully endorses it.” (She even offered a sneak peek on Instagram.)

“It’s fan-generated, but it’s important to us that we had her blessing, so we went to Britney and said, ‘Here’s what we want to create, we want fans to have this experience,’” Delson says. “She was super supportive and that’s why we were able to do this and have access to these costumes and use her name and likeness.”

Questions about the #FreeBritney movement were off-limits at the press preview, but Kevin Wu, a Spears fan, previously told Los Angeles that he and other protesters are suspicious of the enterprise.

“#FreeBritney activists are boycotting the Zone as long as Britney is still under conservatorship because the project was created for her team to profit from her name and legacy without her input,” Wu said.

The pop-up opens January 31, just days after Spears’s most recent court appearance regarding her conservatorship, but Ramirez says the timing was incidental.

Controversy aside, Delson says they just want to give Britney fans a reason to get off the couch and put down their phones and “have a life-changing experience” that allows them to “interact with their favorite celebrity in a different way.”

The getting off the couch bit is nice, but it’s doubtful people won’t have their phones firmly in hand for optimal selfie-taking throughout the Zone.

If you really want to have a phone-free time, there’s a free interactive app and wristband that allows cameras set up in the room to take the photos for you and deliver them straight to your smartphone. However, only five out of the ten rooms have their own built-in cameras, so best to bring a friend who knows your angles.

Once guests enter the pop-up, there’s a large room full of costumes in glass boxes, including the dress Spears wore when she was on Star Search in 1992. Not surprisingly, there’s also plenty of merch available for sale.

The ten rooms recreate Britney music videos beginning with “…Baby One More Time” and ending with “Piece of Me.” No music represented goes past 2008, which is when she released the album Circus. (She’s released three albums since then.)

The room for “…Baby One More Time” features a basketball hoop, lockers, and pieces of paper so you can write Spears a note and “slip it into her locker.” Remember the dude in the spacesuit who retrieved the “Heart of the Ocean” for Brit in the “Oops I Did It Again” video? He’s there as a photo op. Sadly, the room for “Stronger” is just a black chamber with some silver chairs inside, but the “Toxic” room is sure to make you feel like a sexy flight attendant. And since no Instagram trap would be complete without a ball pit, there’s one of those in the “Circus” room.

The highlight? The “Me Against the Music” room, where you can film yourself dancing on the other side of the wall from a video of Spears. Hell, you might even spot the real deal one of these days—Delson and Ramirez say Spears is expected to drop by the pop-up sometime.

The #FreeBritney Movement’s Next Fight