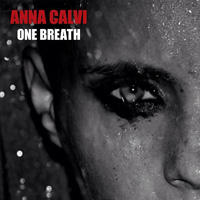 Her high-waisted black trousers, crimson blouse, and severely pulled-back hair call to mind a flamenco dancer, except Anna Calvi stands with feet firmly planted, letting her hands do all the dancing along the fret board of her Telecaster. The English alternative rock artist is startlingly effective at making the audience at the Hotel Café feel everything she’s experiencing on stage. She plays tracks from her new album, One Breath, an elegant recording that somehow surpasses her Mercury Prize-nominated 2011 debut, Anna Calvi. Describing Calvi, Brian Eno told BBC Radio 6 that she was, “the best thing since Patti Smith.”

At 3 p.m. the day of Calvi’s gig, it was a different scene. We meet at the diner of her Hollywood hotel. She’s still recovering from a nap she didn’t mean to take—she had woken up at 6 a.m. for KCRW’s “Morning Becomes Eclectic” and then done a series of phone interviews—she slides into a booth and introduces herself quietly. So quietly, in fact, that I can barely hear her over the diner’s radio. She’s so unassuming that it’s difficult to remember we’re discussing an album hailed for its vocal acrobatics.

“I didn’t even start singing until I was in my early 20s,” says Calvi. Now 33, she picked up the violin at 6 and the guitar two years later, teaching herself to play along to Jimi Hendrix. She wrote her first song at 10 while imagining she was in David Bowie’s band but vocals didn’t feature until she realized she’d have to sing on the tracks she was writing for her eponymous debut. “A lot of singing has to do with the emotional, the psychological aspect, and being nervous about it makes your voice clam up. I got past it by practice, singing along to Nina Simone, Edith Piaf, Elvis—as many of the greats as I could.”

Because the “singer” in singer-songwriter came later, her guitar became her voice. Hendrix, Django Reinhardt, and John McLaughlin taught her to express her emotions without opening her mouth. The resulting style caught the attention of acts like the Arctic Monkeys and Nick Cave, both of whom invited Calvi to tour with them.

“My guitar is an extension of myself,” she explains. “I think it’s a good thing that I didn’t start singing earlier. When I play, I imagine the guitar is an orchestra or a piano. I try to pull a more interesting sound out of it.”

Those variations on traditional songwriting are what set Calvi apart. Her parents’ collection of classic rock records and her own study of 20th century classical composers have come together to create a singular sound. Lush orchestral and choral arrangements sit alongside wild, stormy guitars and operatic vocals. One of Calvi’s unique strengths is her ability to channel raw emotion in a relatable way.

“Music allows me to get in contact with a stronger side, with the fiercest part of me. That’s what happens when I’m on stage,” she says. She doesn’t care to compartmentalize the experiences, even the painful ones, behind her songs.

“I want to feel a lot when I’m on stage. I summon whatever I need to in order to get as emotional as I can when I play. If it’s a song about someone, I’ll think of them the whole time I play. Is that a bit self-destructive?” she laughs. For some artists, night after night of that would take its toll. “Not me. For me, it’s good. I’m a sucker for emotion. I love that shit. I think that’s what good art’s about. You’ve got to get in there and get dirty.”