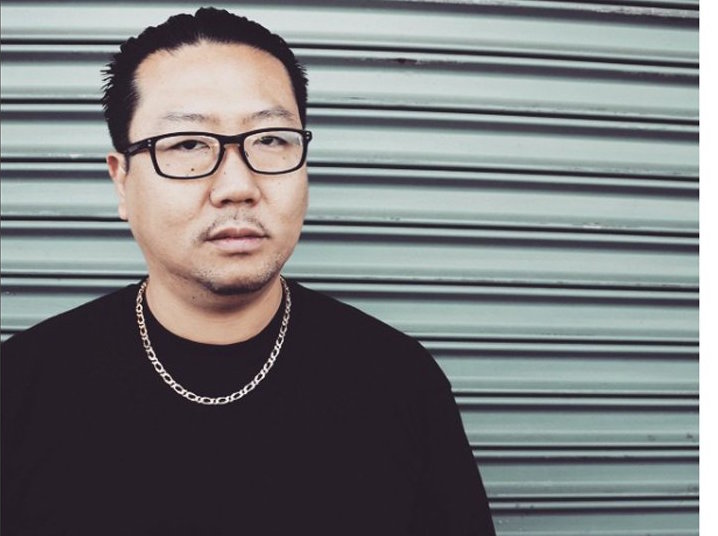 On the wall in the recording studio of Kirk Kim’s Cycadelic Records Entertainment in Studio City is a framed New York Seoul newspaper clipping. It tells the story of Kim’s dad, Wan Joon, an unlikely godfather of gangsta rap. Years after fleeing to South Korea from the Communist north, Wan Joon landed in Los Angeles. Eventually he opened a booth at a Compton swap meet, where he sold hip-hop tapes and CDs, including the earliest albums from N.W.A. members Ice Cube and Eazy-E as well as countless other future stars. He was a champion of those artists, though, really, Wan Joon just needed the money; his son Kirk was the real fan. Kirk worked at the stall and continued to pitch in when his dad opened Cycadelic Music Corner nearby, launching what became the definitive shop for anyone looking to pick up some gangsta rap.

The Compton shop is still going—albeit across the street from the original space—but Kim now commands an augmented version of the legacy Wan Joon left him when he died in 2013. After helping a friend record a rap album that took off in Japan, he arranged a five-city tour there for him; ever since, Kim has been spending most of his time traveling back and forth to Asia booking hip-hop gigs. Last April the 39-year-old added running a music label to his profile, when Cycadelic Records signed its first act, the local hip-hop foursome West Coast Hangookins. It’s all part of Kim’s plan to bring L.A. back to Korea.

Considering his time as a music booker, Kim knew that cracking the Korean scene wouldn’t be easy. K-pop rules in Seoul, but when the film Straight Outta Compton hit theaters last year, “a fan base developed there,” says Kim, who combs his dark hair straight back like a ’50s greaser. “People started reaching out to us, and we knew Korea was ready.”

So Kim and Cycadelic’s vice president, John Lee, assembled “Compton to Seoul,” a star-studded concert that they shipped across the Pacific in April. L.A. legends DJ Yella, WC, and Mr. Capone-E were joined onstage by some of Korea’s best in a sold-out banger that rumbled Yes24 MUV Hall in the clubby Hongdae District of downtown Seoul. From there Kim entered one of his label’s most promising acts, the rapper Killagramz, into Show Me the Money, a kind of American Idol of Korean hip-hop. “And,” says Kim, “he fucking excelled.” Though Killagramz was eventually booted from the show (Kim’s theory? “The companies out there are all kind of shady”), he did land a role on the Korean Entourage. “Nothing’s gonna stop us,” Kim says, sounding a little like an Ice Cube lyric. “If we can’t get any help, then we’ll just do it the old N.W.A. way and say, ‘Fuck it, we’ll do it ourselves.’ ”

To that end he’s founding a DJ school in L.A. for Korean American artists. If an acolyte shows promise, he or she can stay in Seoul at the Cyca-delic dormitory that’s in the works—a way to cut down on hotel costs, even if it seems suspiciously similar to the well-publicized dorm setup that K-pop producers rely on. The empire building won’t stop there: Kim is honing plans to start an underground nightclub in Seoul, where an open-mic format would allow young talent to drop bars in front of an audience. The name? Compton, of course.