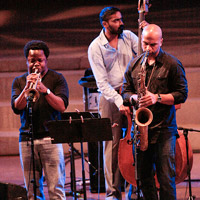 If a jazz festival wanted to kick off by declaring that it was Not Your Nana’s Bippity-Skippity-Bop, it couldn’t have found a better way than “Yo! Yo! Yo! Welcome to the Angel City Jazz Festival!” Moderated by writer Greg Burk, the hour-long symposium “Honoring and Breaking with Lineage” on Saturday at REDCAT featured an intriguing mix of scribes and musical alchemists including Jazz Bakery maven Ruth Price, L.A. jazz historian Steven Isoardi and two generational picks from this years’ performers, young-lion trumpeter Ambrose Akinmusire and local free-jazz godfather Bobby Bradford.

Isoardi responded to Burk’s entreaty to “make a case for the L.A. scene” by reading a quote from flautist/saxophonist Paul Horn: “When I moved from New York to Los Angeles in 1957, I quickly realized that the East Coast was extremely conservative. California was wide open, experimental, innovative, and an exceptionally creative environment. People felt free to try new ideas; if it was new and interesting, they went for it. This type of atmosphere produces its share of kooks, weirdos, and psychotics, but it also produced brilliant concepts in science, business, art, education, and spiritual matters.”

Apropos that the word “weirdo” would be invoked, as that is exactly what most established L.A. jazz musicians called free-jazz pioneer Ornette Coleman when he was getting kicked off of bandstands for perverting Tin Pan Alley standards with a plastic saxophone. This was around the same time Horn relocated to the Left Coast. Bobby Bradford, who played cornet with Coleman on and off since the 1960s, aptly summarized Coleman’s plight/triumph: “[Coleman] could play chords. He could also count. But he was the first player I ever met who was prepared, willing and able to get up on a bandstand and play a free improvisation not based on a chord sequence…In my mind, Ornette Coleman is the first guy who made that work. I can’t say that he was the first guy to attempt it…but he was the first guy who could sustain it.” Among Coleman’s resources was something that alienated many jazz fans and musicians while drawing others like moths: Moxie. “You reach a point where you have to develop a healthy irreverence for what everybody else is doin’, and that takes a lot of nerve. Ornette was saying: ‘No disrespect to you, but I have something I want to say.’”

When Akinmusire was asked about the connection between his music and that of saxophonist Archie Shepp, who he was playing with the following evening, he responded, “I try not to think about what my music is…I just know that it’s a by-product of how I live my life and what I believe, and those things are always changing. I will say I am influenced by him and his generation because they seemed to be about ‘community,’ which is something that’s been lacking in my generation. In my opinion, there’s never been a really great contribution to jazz without a collective group: The Ornette Coleman-Don Cherry Quintet, John Coltrane’s quintet, Miles Davis’ quintet. When Archie Shepp first got signed in the early ’60s, it was part of a collective group with [trumpeter] Bill Dixon, and I think that’s really beautiful. I don’t think that would ever happen today.”

Hearing about all this music made one itch to hear it. Shortly after the table was cleared young guitarist Anthony Wilson and his trio took the stage. Wilson, son of the great (and still active) L.A. bandleader Gerald Wilson, was like the band’s un-leader, sitting placidly on a stool and letting his lyrical, tremolo-free guitar lines mingle with the church-meets-lounge grooves of Larry Goldings’ Hammond B3 organ and Jim Keltner’s supple, skittery drumwork. Keltner, the evening’s “legend” (per the festival’s theme “Artists & Legends”), has been a ubiquitous if anonymous presence on FM radio for the last four decades. He has played on everything from Steely Dan’s “Josie” and Randy Newman’s “Short People” to Traveling Wilburys albums and with the “Flower People” incarnation of Spinal Tap. Like many session musicians of his generation, Keltner started out in jazz. (This should have been obvious given his dark aviator shades, thatch of beard, and laconic demeanor.) One of the great surprises of the night was the trio’s cover of “The Kiss,” an obscurity from the tragic, abbreviated oeuvre of ‘70s L.A. singer/songwriter Judee Sill.

The only thing missing? Someone yelling at the end of the evening: “Angel City Jazz! Hollaaaaa!” Oh, well. Next time.

Read the full review at Stompbeast.