Home Uncategorized Bridges Of Madison County Is No Hamilton, but Jason Robert Brown Has... 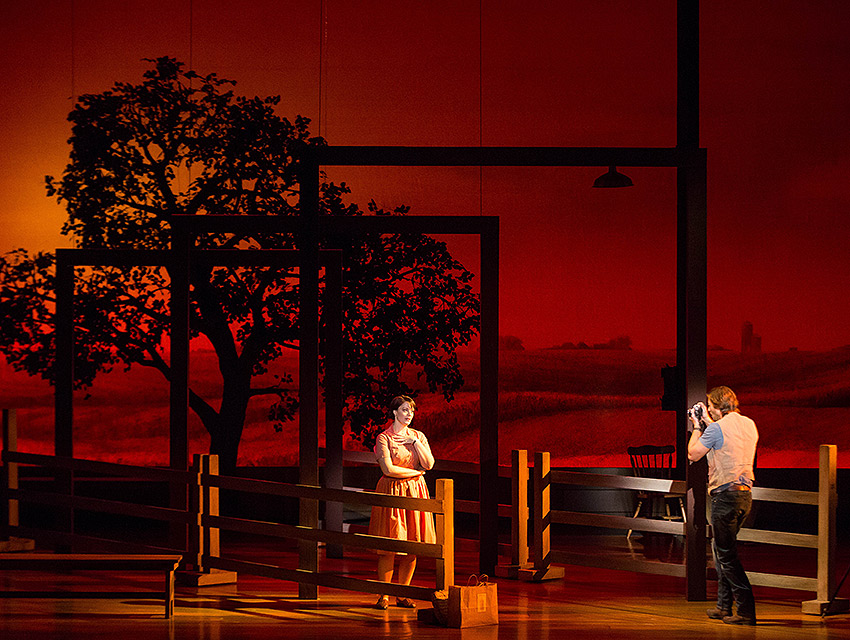 Composer Jason Robert Brown has three Tony Awards: one for Best Score for his musical Parade, and two for The Bridges of Madison County (Orchestration and Best Score.) He is one of the most highly acclaimed writers of new musicals, yet mainstream success has eluded him. Perhaps that sense of longing is what infuses his score for Bridges, which is now playing at the Ahmanson Theatre. Brown will be conducting all the Los Angeles performances.

“For me every show is going to have its own identity, and that’s a lot about the story and the location and the characters,” he says. “This is not a show about urban sophisticates, and, to a large extent, a lot of my shows have been about people with complicated thought processes. That makes sense on the piano. The people in Bridges should not be functioning in such dense and sophisticated ways. It is farmland that’s empty and quiet, and I wanted the sound of the show to reflect that.”

Bridges of Madison County, which tells of a relationship between a married Italian woman and a National Geographic photographer, began as a novel by Robert James Waller. It was made into a film by Clint Eastwood, which also starred Meryl Streep. Bridges falls into a long tradition of stories where two lovers don’t end up together (think Romeo & Juliet, Casablanca, Out of Africa, Gone with the Wind.) “I don’t think great romance is doomed to separation,” he says, “but I think it is tied to longing. What is most significant about Robert & Francesca is they continue longing for each other the rest of their lives. Their connection was very real, but it’s not the person they chose.”

Being both the show’s composer and its conductor requires some compartmentalization on Brown’s part. “I do have to put on a different hat when I’m conducting,” he says. “I’m not just interpreting my own stuff, but I’m guiding everyone else’s interpretation. Along the way, you discover a lot. I discover a lot about why this tempo works and this one doesn’t. What happens if I cut this measure? Do things move faster or do we lose something? Those are decisions I get to make as a conductor, and luckily the composer isn’t going to get mad at me.”

Brown is a big fan of Stephen Sondheim’s work, and earlier this year he presented Sondheim with an award for lifetime achievement. In that introduction, he talks about the specificity with which Sondheim chooses harmony, lyrics, and rhythm. As for whether that precision is important in Broadway musicals, Brown says, “I don’t think it’s important for the construction of Broadway musicals but for ones I’m going to like. I’m not that disciplined. There’s an undergirding of structure in the work—that’s something I learned from Steve: how to have enough of a foundation so I can do crazy things on the fifth and sixth floors and the eleventh and twelfth floors won’t collapse.”

At the beginning of the year, Brown had a new musical, Honeymoon in Vegas (based on the 1992 film), open to rave reviews. It closed after 93 performances. Bridges only ran 100 performances. If he were to rework arguably his best-known song, Stars and the Moon, to be about a composer and his relationship to his craft, would it be possible for that composer to ever have the moon? “If you asked me three years ago, I would have said yes,” he says. “Now I think the moon is a whole different thing. I’m represented so well by the things I’ve put into the world. Maybe that’s the moon—to do the writing you love and to see it put up. It will always drive me crazy that I don’t have a show that is Book of Mormon or Hamilton. I have nothing to complain about. I think that that person who sings Stars and the Moon is always intensely guilty of wanting the wrong thing at the wrong time. I would rather not be that person anymore.”