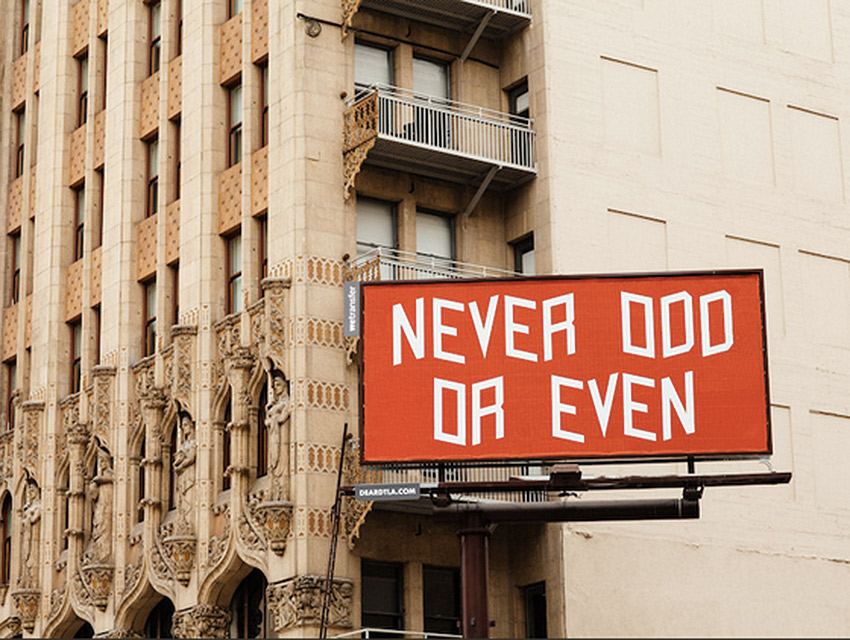 Downtown Los Angeles is begging for your attention. There are so many places to look, people to see, and murals to admire. Which is why Brian Roettinger thought big for his newest project—as in billboard big. It’s the perfect canvas for this deep thinker. Roettinger is an L.A.-based artist and two time Grammy-nominated graphic designer who works with fellow artists, architects, and musicians. His newest project is a billboard that shouts from the walls of the Ace Hotel, but it’s more than that: WeTransfer and the Ace have teamed up for Dear DTLA, wherein a new artist makes the billboard his or her own each month. WeTransfer then provides the artwork as a free digital download. It’s both community building and interactive; a love letter to a part of the city that has been overlooked for so long. The downtown revitalization is real, and it’s here to stay. Street Art Spotter asked Roettinger some questions about his latest work at 929 S. Broadway.

Can you tell me a little bit about the significance of your billboard?
Here is the text relating to the project.

Nothing is “for sale,” I thought.
How fitting: WeTransfer
Along with Ace Hotel
Helped create this billboard spectacle

This intersection represents
DTLA, as the acronym goes
A change in scenery
Something Cosmic or Chaotic grows

Favoring, instead, this notion
that we’re all in a movie
Caught (feverishly) between feuding
Liberty’s of libertines and real life

However tactical
One asks patiently:
What does that mean?
Or, does it mean anything?

I really dig the fact that WeTransfer makes the art accessible and downloadable. You are an artist constantly exploring different mediums (full disclosure: I’m writing this while looking at my copy of The Thing issue 25). Was this important to you?
Yeah, I’ve always been a multidisciplinary thinker and maker. The objective at the Bauhaus [school] was to unify architecture, art, craft, and technology; this idea was incorporated into the curriculum. This made a strong impression on me when I was studying design. It’s a bit manic, but in the end it’s what fuels my interests. I have too much shit I want to make.

Is this the largest scale art piece you’ve made to date?
I’ve designed commercial billboards that were in Times Square. Those were much larger. But this is the largest non-commercial one.

Does this inspire you to bring your art out in the streets more? We’d love to have you.
I love driving, and I think there should be more visually pleasing public works for commuters and pedestrians.