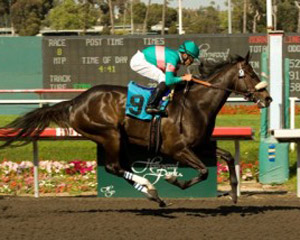 It was painful to watch the crestfallen jockey Mike Smith, the stricken faces of owners Jerry and Ann Moss, as Zenyatta lost by a nose in Saturday’s Breeders’ Cup. After all, it was their selflessness that had brought the mare to this historic place—at six the oldest horse to run in the world championship, a heroine just when battered California needed one. At least, as racing’s Sanhedrin slyly intimated would happen, the big bay mare was never outclassed (She hasn’t raced against boys, they intoned. Yes, she did, brilliantly, beating the best of them in last year’s Cup. And where was Rachel Alexandra, the East Coast darling who’d robbed her of Horse of the Year? Since retired after an uninspiring season). Rather, on Saturday, the queen of Hollywood Park suffered—and overcame—the roughest of starts, trusting, as always, that Smith would guide her through the fleet-footed crowd for her patented charge to the finish. She made up the lost ground ever-so-dramatically only, as the commentator so aptly surmised, to run out of it inches from the finish line.

More than 70 years ago, during that other great Depression, another West Coast horse lifted a nation’s spirits. Santa Anita’s Seabiscuit was the storybook ending writ large—awkward of stature and temperament, deemed unreachable, saved by a misfit trainer, he became the common man’s hero. He triumphed over his critics, the East Coast’s elite, soundly beating their blue-blooded prince, War Admiral. Every ragged American took heart. By the time Zenyatta reached her 19th consecutive victory, and millions of YouTube watchers had relived her electrifying 2009 Cup win, she’d worked her own Seabiscuit magic. People came to realize—and you saw them in droves hoisting teal and pink signs at trackside—that Zenyatta was a story for our times.

She was spared the fate of so many thoroughbreds who were raced young and hard for a fast return on investment. Media accounts told instead of her trainer’s enlightened approach, of the patient training that had allowed her to bloom, to grow into her striking 17.1 hands frame, of the around-the-clock nurturing and reassurance that gave her the confidence to win. In a world marked by greed and uncertainty, Zenyatta had been spared both. Race after race, she helped us escape them too.

Click here to read Wonder Girl, the profile of Zenyatta in our November issue