Home Uncategorized Breaking Bad: Who’s Having an A-1 Day? 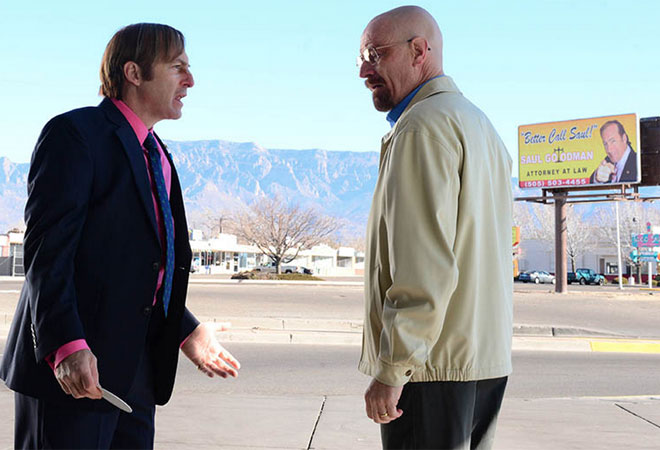 Before you can gaze upon the ruins of Ozymandias (be patient, that’s next week’s episode—and Rian Johnson’s directing it!), you have to get to To’hajiilee. That’d be the Navajo reservation where Walt and Jesse first cooked, where Walt later buried his loot, and now where he must finally turn himself in.

The episode started slowly, focusing on the minutiae of meth production, but put the pedal to the metal the moment Walt got in his car and raced to a whiplash-inducing cliffhanger ending. (Bye bye, Hank. Don’t let those pearly gates hit you as you shuffle off this mortal coil–we hope.) It’s no small irony that at the climax of the episode, Walt lies helpless in handcuffs while the violence he has unleashed finally explodes around him. But that’s all obvious stuff. Here are a few things you might not have noticed during last night’s visit to “To’hajiilee.”

6. Please Don’t Stop the Music
The music cues in Breaking Bad have always been interesting; last night, they were inscrutable. While Todd indulges his penchant for sitting too close to older women, the tinny strains of the 1984 Steve Perry hit “Oh Sherrie” echo from somewhere in the meth lab. Later, “She Blinded Me With Science,” Thomas Dolby’s only major U.S. hit, blares from Todd’s cell phone. Todd isn’t wowing anyone with his laboratory prowess, but “To’hajiilee” made us feel like we were stuck in a B-grade ’80s time machine.

5. Brand Loyalty
Going for credit in the straight world, Skyler emphasizes to Walt Jr. how important it is to reinforce the car wash’s brand by telling customers, “Have an A-1 day.” In the more lucrative shadow economy, Lydia Rodarte-Quayle explains to Todd that their meth must be blue because that’s the brand that overseas buyers have come to trust. Smart thinking, ladies.

4. A Picture Is Worth…
Two major plot points in this episode revolve around fake photos: a doctored image of Jesse with his brains splattered on the ground and a bogus photo of Walt’s money buried in the desert. In an episode where the master manipulator is outfoxed by his brother-in-law, it’s fitting that the man of many personae should, in part, be undone by false imagery.

3. Crack Shot
Seriously, how many neo-Nazis toting an arsenal’s worth of semi-automatic weapons does it take to gun down two federal agents standing out in the open with only a few firearms? Mmmmhm. These swastika-sporting assassins are the worst shots since the Stormtroopers in the first Star Wars movie. After they’re done with murdering those DEA agents, maybe this elite squad can practice screwing in light bulbs.

2. Huell’s Gold
With the body of a vast, overgrown baby and a pinheaded cranium, Huell is one of Breaking Bad’s most entertaining minor characters. This is his moment.

1. Chef’s Choice
Like the meth in the show, Walt’s assistants have suffered from a lack of quality control. First, Walt had Jesse, who lacked any discernible math skills but possessed a raw, improvisational talent. Then, he had Gale, a top-notch chemist and karaoke fan who was as suited to meth manufacturing as Tim Tebow is to NFL quarterbacking. Then, Walt had Todd. Aside from Todd’s eagerness to please, his desire to improve, and his lack of a moral compass, who wouldn’t want him as an assistant? None of these fellows can replace Walt. That’s fine. Gale and Todd exist mainly as foils for Walt. When all he wants is to get out of the game, Walt’s brilliance at making meth—hey, everyone’s gotta be the best at something—is also what ensnares him.