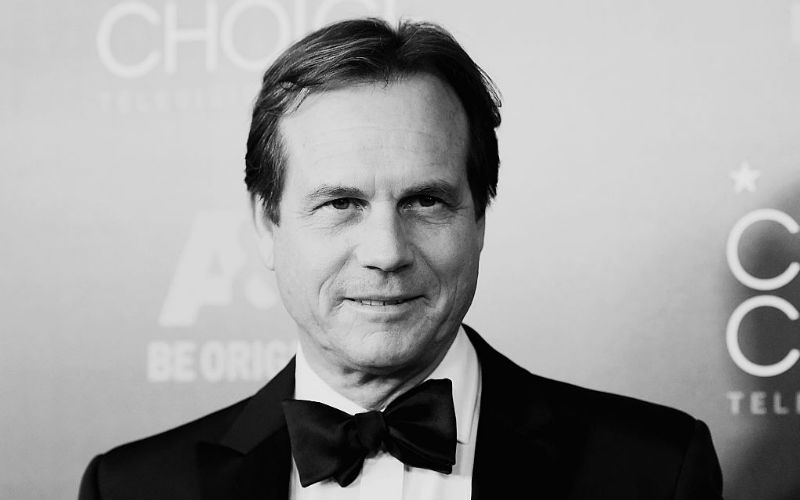 In a thunderstorm quaint Ojai radiates even more warmth than when the sun is shining. The actor Bill Paxton lives in the foothills that ring this valley community about an hour and a half north of Los Angeles. As the rain pours down outside the window, he prepares to fix his son an egg sandwich. Slender, with his hair closely cropped, Paxton pads around the kitchen in rag socks, a gray V-neck sweater, and Levi’s 501s. He scans the refrigerator until his blue eyes settle on the butter. More than two decades ago Paxton and his wife, Louise, bought this rustic home surrounded by a couple of acres of tangerine and avocado orchards. It provides them with a veneer of normalcy, given that he’s a movie and TV star who’s had to leave town every now and then to play major roles in Titanic and Twister and Apollo 13 and that little cable show Big Love. “To be honest with you, I keep a very low profile,” says Paxton, slicing off a pat of butter. “I’m not heavily scrutinized, I’m not dating a starlet, I’m left alone pretty much.”

All modesty aside, it’s a double life he’s leading, and in this regard he has a great deal in common with his character on HBO’s hit polygamy melodrama. Paxton stars as Bill Henrickson, a home-store retailer and aspiring casino mogul who has moved his three wives and eight children to a quiet suburb in hopes of blending in. With a cast that includes Jeanne Tripplehorn, Chloë Sevigny, and Ginnifer Goodwin (as his wives) and veterans Bruce Dern, Ellen Burstyn, Mary Kay Place, and Harry Dean Stanton, Big Love is arguably the best-acted hour on TV.

Paxton, who is 54, has driven home on this Saturday morning after spending the week filming in Santa Clarita. He has only a few more episodes left to shoot for Big Love’s fourth season, which began January 10. “We’re really burnt out,” he says of the cast. In this season’s story line, “there’s been so much Sturm und Drang. I think this guy would go home one night and blow his brains out.” He pantomimes the action, then pauses to reconsider. “That wouldn’t be too good in the afterlife, though,” he says as he lets out a twangy chuckle. There’s an everyman quality to Paxton. Whether he’s portraying a polygamist or a killer, you feel he could be your pal. “In retrospect, it might have been hard to break another actor into that role,” he says of his character on Big Love, “but I have always been the underdog. People root for me. Like in A Simple Plan…”

“I love that movie,” says his 15-year-old son James, sweet and gawky in a hoodie and braces. He’s sitting at the kitchen table waiting for the egg sandwich.

“This guy has murdered people,” Paxton continues as he drops the butter into the frying pan, swirls it around, and cracks an egg. “I blow this woman halfway across the room and then deny it, yet people worry about me, they sympathize with me. It’s crazy.”

James’s 12-year-old sister, Lydia, darts in and out of the kitchen as her dad cooks. She’s checking out an old-school Disney flick that’s airing in the next room.

So how does Paxton put himself in the mind-set of a polygamist? “I kind of use my own life,” he says. Barb, wife No. 1 on Big Love (played by Tripplehorn), reminds him of Louise. “We’ve been through it all,” he says. His real-life spouse is napping down the hall. “She knew me when I was struggling. She was a student. We met on a bus in London. I’ve seen her give birth. I was with her when her father died. Then we mixed our blood watching these two kids grow up.” When he’s doing a scene with his fictional teenage son, Ben, “It’s like I’m with James,” he says. As for Bill Henrickson’s affects—the high collars, the double-knotted Windsor tie, even the haircut—he says they’re homages to his own dad, circa 1963. Paxton had to dig deeper to access the religious fervor of his character. “I was raised Roman Catholic, because my mother was Catholic,” he says. “My father referred to himself as a pagan. My mom would drag us to church while my dad would be on a chaise longue naked, reading the latest Ian Fleming novel.”

Paxton grew up in Fort Worth, Texas, where his father ran the family’s lumber company and immersed Bill and his three siblings in the arts, schlepping them to movies and museums and turning Bill into an art collector like himself. “I said to him when I was 18 that I wanted to go to Hollywood,” Paxton recalls, “and he said, ‘Oof, I should have exposed you to more business.’” He got his start working in the art department on Roger Corman movie sets. Paxton met a young James Cameron and was a thug in 1984’s The Terminator, winning immortality as the first human being maimed by Arnold Schwarzenegger’s laconic android. During the next few years he met similarly grisly ends in Aliens and Predator 2. His breakout comedic role came in 1985, as the wacko brother in John Hughes’s Weird Science, while his 1992 performance as a small-town police chief in Carl Franklin’s brilliant noir One False Move earned him dramatic bona fides. A slew of solid roles (he’s made few missteps) followed until his first TV job, on Big Love.

Paxton has slipped the fried egg between two pieces of toast and persuaded James to wash down the meal with orange juice rather than soda pop. Unlike his father, Paxton isn’t hoping his children will follow his lead. “Basically actors are high-paid itinerant workers,” he says in a low whisper as James takes his plate to the table. When Paxton directed the golf film The Greatest Game Ever Played, James had a cameo but would hand notes to his dad telling him how nervous he was. Lydia is more flamboyant and dramatic, like Paxton’s mom, he says, but he doesn’t plan to steer her into the business.

Even if Paxton’s children catch the acting bug, the worsening climate for mass entertainment—fewer projects green-lighted, fewer made—might make it hard to have the kind of career he’s enjoyed. “I dunno where the business will be when they’re older,” says Paxton, his left brow cocked. “I ran into Kurt Russell and Goldie Hawn—I did Tombstone with Kurt—and he said, ‘You know, Paxton, it’s the last days of disco. Me and Goldie are getting out.’ Meaning the system that we all knew coming up, that we were comfortable with, going from film to film, it’s gone.”

Lydia returns to the kitchen. “Can’t I make you an egg sandwich or something?” her dad asks. She gives in. He reaches for the butter and starts the routine all over again.