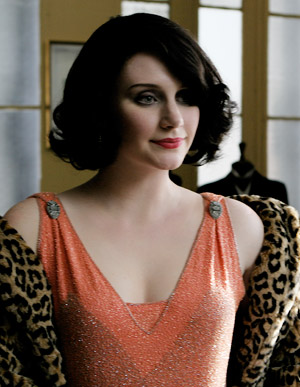 She has polished off her bowl of polenta with the candied pecans, brown sugar, and whipped mascarpone topping. The two jumbo-size croissants have likewise surrendered to an appetite as hearty as a French-Canadian lumberjack’s. Actress Bryce Dallas Howard has finished breakfast, but Silver Lake’s LaMill restaurant offers other comforts. The baroque yet rustic decor bears the stamp of Rubbish Interiors, a design store across the street that is owned by friends of hers. The café music mix was put together by her best friend from high school, who is also godmother to her two-year-old son, Theo, and resides at the house Howard shares with her husband, actor Seth Gabel. Little wonder then that Howard has admitted LaMill into her carefully circumscribed universe.

This morning Howard has dressed for a Nantucket regatta circa 1952—conservative blue-and-white-striped blouse, crisp blue jeans neither distressed nor designer faded, and tan slippers with tiny bows. Her red hair is caught in a neat ponytail. “There’s a vibe I send to the paparazzi,” says Howard, laughing over a half-finished cup of hot cocoa. “It says, ‘Trust me, I’m not worth your time. I really only leave the house to go to the grocery store or LaMill.’ ”

The eldest daughter of actor-director Ron Howard, she has starred in M. Night Shyamalan’s The Village and Lady in the Water, done Shakespeare with Kenneth Branagh, and portrayed the new girlfriend of Tobey Maguire’s Peter Parker in SpiderMan 3 as well as the pregnant wife of Christian Bale’s John Connor in Terminator Salvation. With only five years in film she has established herself as the kind of protean actress who doesn’t so much inhabit roles as haunt them. This month the 28-year-old Howard takes the lead in The Loss of a Teardrop Diamond, the first film in 20 years to be shot from a Tennessee Williams screenplay. Come summer she’ll play Victoria, the vampire who torments Robert Pattinson and Kristen Stewart in Eclipse, part three of the blockbuster Twilight saga. She might seem casual about her ability to maintain tabloid irrelevance in the face of such prominence, but it is a marvel of media engineering.

Howard had arrived the night before from Portland, where she’s a first-time producer on an untitled coming-of-age story written by Jason Lew, a college friend. Gus Van Sant, nominated for an Oscar last year for Milk, is directing. Although others showed interest, Howard and Lew went with Imagine Entertainment, which means that Ron Howard and Brian Grazer are coproducers. She had never worked alongside her father and is finding plenty to like about the experience. “It’s making me honestly yearn for more,” she says. “I just have so much respect for him, and he’s my mentor.” She has made inroads as a screenwriter and is in talks with a production company about a script she cowrote, The Originals, which she describes as The Big Chill meets The Breakfast Club.

Although her dad starred in Happy Days, and Henry Winkler is her godfather, Howard grew up less familiar with Richie Cunningham and the Fonz than most kids her age. “Our access to the TV was really restricted—highly restricted,” she says. “I never watched Happy Days, ever.” She didn’t sit through a full episode until after her Tonight Show debut at 23. Jay Leno gave her a DVD collection of the series. “He was like, ‘What’s your problem? You’ve got to see it,’ ” Howard says. “So I went home and watched it, and it was great.”

Howard traveled to locations when her father directed such films as Parenthood and Backdraft. Otherwise she grew up insulated from Hollywood. She did spend her first four years in L.A., but after a stranger handed her a script in day care, her childhood days in the motion picture capital were numbered. “My parents were just like ‘OK, we’re out of here.’ ” The Howards escaped to a Victorian home on a farm near Greenwich, Connecticut, where they brought up their four kids.

After high school Howard enrolled in New York University’s writing and drama program but dropped out to take stage parts. Shyamalan saw her in Shakespeare’s As You Like It and arranged a lunch. “Because I know he has children, I thought he was going to ask me what a lot of people ask—‘How did your parents raise you in the business?’ ” she says. Instead he offered her the lead in The Village.

There was no dating or partying when Howard came back to Hollywood in 2003. She was settled romantically, having met Gabel when she was 19. Her writing partner, Dane Charbeneau, is not only her husband’s best friend but recently married her sister Jocelyn. Her son Theo’s nanny is her sister Paige’s best friend from boarding school. “We’re all sticking together, in practically a very incestuous way,” Howard says, “and we’re creating our version of what life can be together.”

Those wanting to see Howard unhinged will have to make do with Teardrop Diamond. She stars as Fisher Willow, a volatile plantation heiress, and the opening scene has her swaying around a ballroom in a flapper dress, taking belts from the whiskey bottle that is her dance partner. It’s a remarkable performance, considering that she has never allowed herself a sip of alcohol and has no sense of what even a mild buzz might feel like. Alcoholism runs in her family; what others might consider an occasional glass of wine she regards as a slippery slope. “Seeing wonderful people say things that you know would embarrass them or do things that aren’t really what they want to do, and then you get sick afterward—is that pleasant, folks?” she asks. “I don’t have any desire to lose control.”

Howard was with Christian Bale when he suffered a meltdown on the set of Terminator Salvation; the four-minute recording of the rant would become the toast of talk radio and the Internet. In the coffee-scented serenity of LaMill, she offers some context about the scene they had been playing. “His character was losing his mind for the first time. His mother had lost her mind, and a theme throughout the movie is ‘Am I going crazy?’ It was intense,” she says. “I was screaming at him, and he was screaming at me, and then the screaming got misdirected.”

Ron Howard was a young star who not only avoided becoming a train wreck in later years but evolved artistically because he inoculated himself against the usual temptations that plague those loved by millions. That his daughter, now a major actress in her own right, has achieved this same immunity is arguably more fascinating than a snapshot of Britney Spears on the town with no underwear or a YouTube clip of Lindsay Lohan fleeing her crashed Mercedes. But who wants to blog about the well adjusted?

When Eclipse comes out, let the paparazzi elbow one another black and blue as they chase its young stars Pattinson and Stewart. The film’s villainess delights in the certainty that anything she says or does away from a movie set, now or in the future, would only bore tabloid readers and Web gossips to tears. “I guarantee you nothing’s going to change,”  says Howard, a flush filling her cheeks, “because I have the least interesting life!”