Home Uncategorized Break Out the Trains, Planes, & Robots. Kraftwerk is Coming to L.A. 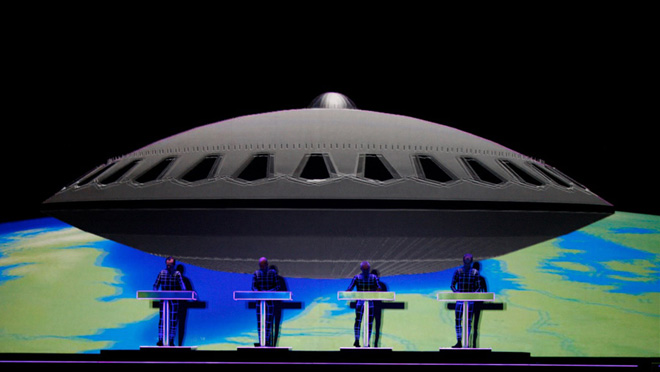 Kraftwerk has once again hopped on the trans-Europe express, and this time they’re taking it all the way across the Atlantic. The German electronic music innovators just announced they’re coming to Los Angeles for a string of special appearances at the Disney Hall. Dubbed “Catalogue 1 2 3 4 5 6 7 8,” the performances, which take place happening March 18-21, will see the band perform their eight albums in chronological order. The shows will also have a 3D and VFX components to go along with the music.

Formed in 1970 the northern German city of Düsseldorf, they’re often credited as the forefathers of the electronic music genre. The band is known for building its own instruments and devices to create a slew of uncommon sounds and rhythms. With the release of their fourth studio album, Autobahn, in 1974, they achieved major commercial success in the United States and crossover popularity that spread to other genres including early incarnations of hip-hop.

Kraftwerk’s last full length release was 2003’s Tour de France Soundtracks, and they don’t often make live appearances or grant interviews, often allowing robots to conduct photo shoots or using mannequins as stand-ins. In recent years, however, the band has been more open to playing live. Since playing Coachella in 2008, their last Southern California appearance, Kraftwerk has performed a handful of shows and even made a stateside appearance at last year’s Ultra Music Festival in Miami.

The performances are four months away, but the shows are expected to sell out. That means the ticketing process will begin next week. First, you’ll have to register here between Tuesday, December 3 at 10 a.m. (PST) Pacific and closes Friday, December 6, at 11:59 p.m. (PST). The lucky “winners” will receive a link with a code that allows them to purchase tickets beginning Wednesday, December 11 at 10 a.m. The code will allow users to prioritize their top four concert dates and purchase up to four tickets total out of the eight performances.