Home Uncategorized Break Out the Cat Food and Raccoon Repellent: “Grey Gardens” Gets the... 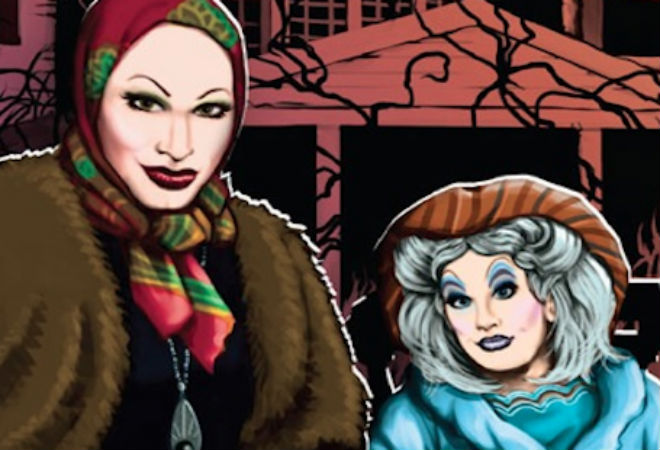 Two spinsters in a decrepit mansion live out a festive folie a deux scenario complete with aggressive raccoons, “paté” (canned cat food), and delusions of grandeur. If it sounds like unlikely fodder for one of the all-time great documentaries, it’s even stranger to see it transformed into a stage show starring drag queens. But that’s the idea of Return to Grey Gardens, which hits L.A. for one night on Saturday, April 5 at the Wilshire Ebell Theatre.

Like the 1975 documentary Grey Gardens on which it’s based, the theatrical interpretation also explores the decaying world of Edith Ewing Bouvier Beale and her daughter Edith Bouvier Beale. Known as Big Edie and Little Edie, the two were socialites who once swam in the same circles as Jacqueline Kennedy Onassis but have become eccentric recluses living in a decaying mansion in East Hampton, New York. On stage, versions of these characters are played by Jinkx Monsoon (winner of season five of RuPaul’s Drag Race and Peaches Christ, who also wrote and directed the show. “I make it sound dramatic because I am a drama queen, but really we should be fine,” says Christ. The show, which also features L.A.’s own Squeaky Blonde, has been a big hit in Seattle and San Francisco.

“Cult movies are a church in some ways,” says Christ, who has staged drag versions of some of her favorite movies —Paris is Burning, The Craft, Show Girls—at San Francisco’s Castro Theatre where she hosts the popular Midnight Mass screening series. “We’re not making fun of these movies. We’re sharing our love for them with an audience.”

As the mastermind behind these cheeky cinematic appropriations, Christ (aka filmmaker Joshua Grannell) is sweetly subversive. “Peaches is self-deprecating and very nice,” says Grannell of his alter ego. “People see Peaches on posters and online and know that she’s all about horror movies. From the outset she seems intense and scary, but she’s very sweet and loving.” Grannell first donned a drag outfit when attending film school at Penn State. He was working on a film project that called for a drag queen, but the actor who had been cast in the role flaked out. “Since there wasn’t an abundance of drag queens in eastern Pennsylvania I donned the drag to save the movie. I’m sure I wanted to do it all along, but that was my first experience.”

Peaches Christ has since become a flagship in San Francisco, producing an impressive array of events that celebrate movies, pop culture, and the art of drag. The idea to adapt Grey Gardens came during a lunch with Jinkx Monsoon. “Her Little Edie performance on Drag Race actually aired that night,” Christ explains. “I asked her about her ‘Little Edie’ character and if she would ever want to do a show based on that, and that was it. We actually booked the show right then and there.”

“The whole conceit is that Jinkx and I have been doing the same show for 40 years. I’ve brainwashed her into not leaving and caused her to give up her career after being on Drag Race,” Christ says. Peaches and Jinkx play opposite each other as Big Peachie and Little Jinkxy, the drag iterations of Big Edie and Little Edie. “One of the biggest challenges was how to mesh Peaches Christ with Big Edie,” Christ says. “In the documentary, Big Edie walks in a very labored way. She’s hunched over and kind of holds her breath.” Another big challenge was imitating Big Edie’s voice. “It’s so high pitched and brassy. At the end of the show my voice hurts really bad.”

In addition to local “Drag Monster” Squeaky Blonde, actor Thomas Dekker (from NBC’s Heroes and Grannell’s 2010 feature film All About Evil) will join Peaches and Jinkx on stage for the L.A. show. “If Return to Grey Gardens is a huge success, I’d like to come back to L.A. with a show we’ve created up in San Francisco in the future,” says Christ, who’ll be adapting The Wizard of Oz. (Naturally, Peaches will play Dorothy and Sharon Needles, another Drag Race winner, will play the witch.) It’s definitely not the last time Peaches and the gang plan on making the trek from San Francisco to Los Angeles. “We want to help build a bigger community of weirdos between the two cities.”