Home Uncategorized The Boyle Heights Gallery That Once Fought Gentrification Is Now Being Labeled... 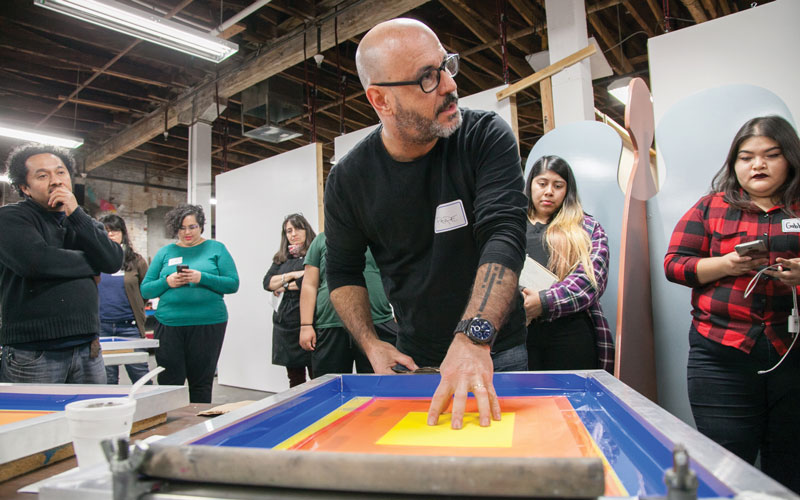 On a Friday night in late February, Self Help Graphics & Art hosted a black-tie fund-raiser in its Boyle Heights warehouse on East 1st Street. Among the renowned Chicano artists there were Yolanda Gonzalez, Gronk, and José Alpuche. Alpuche served as master printer when Self Help was located on Cesár Chavez Avenue in East L.A. from 1979 to 2011, and so it was that Gronk gave him a surprise award this winter: a hand-painted statuette titled La Tormenta, or The Storm. It’s a fitting description for what Self Help has been weathering lately.

Self Help was brought to life in 1970 in a Boyle Heights garage studio by Sister Karen Boccalero, of the Franciscan order, and several artists. Spurred by the Chicano Moratorium against the Vietnam War and Chicano Power marches, they rented a floor above a Brooklyn Avenue storefront in 1972 and baptized themselves Self Help Graphics. It would change addresses over the years but not its role as a gallery, workshop, and community space. In 2002, when Latino store owners were being displaced by development around Staples Center, it even helped organize the “We Shall Not Be Moved” art project to resist gentrification.

But since returning to Boyle Heights in 2011, Self Help has itself been accused of gentrifying, too. Residents have been fearful they’ll be displaced like those along the Figueroa Corridor and in Echo Park.

Activists view galleries as the canary in the coal mine—a sure sign that “bourgie” (white) hipsters will soon be arriving, pricing out the working-class locals as landlords cash in. Whitewashing through art. So groups like Boyle Heights Alliance Against Artwashing & Displacement and Defend Boyle Heights began protesting the arrival of galleries and calling for a boycott of Self Help. “They’ve been very silent on the issue of gentrification,” says Leonardo Vilchis of Defend Boyle Heights. “Their silence is a giant stain on the Self Help legacy because, to the developers and the new galleries, it’s an endorsement.”

Last July, when Self Help held an event called “Artists Dialogue About Arts & Gentrification,” activists went onstage and asked galleries to move out. In November, following more protests, newsfeeds were abuzz when “fuck white art” was spray-painted on a gallery. This February the gallery PSSST closed, blaming the activists.

Gentrification wasn’t on the menu at Self Help’s fund-raiser, but later I caught up with the associate director, Fulbright scholar Betty Avila, at the “mercadito” that Self Help regularly hosts for local artisans. Regarding suggestions that her organization is a gentrification “enabler,” she looks around with a shrug. “I don’t know,” Avila says. “I’m not sure how we could be doing everything they say. I think they give us too much power.” A few weeks later she offers a more defiant message: “We will not shy away from our mission and will do all in our power to focus on the work that has supported the Eastside communities for 44 years.”

But given the city’s housing crunch, the battle will grind on, with partisans arguing over who belongs and who doesn’t. It’s complicated. Attorney and Chicano-art collector Armando Durón is a former Self Help board president. Even he takes a dim view of the galleries—just not Self Help. “They come in with galleries and studios,” he tells me, referring to the newcomers. “They don’t respect our art or our artists. So, yeah, they should leave.”