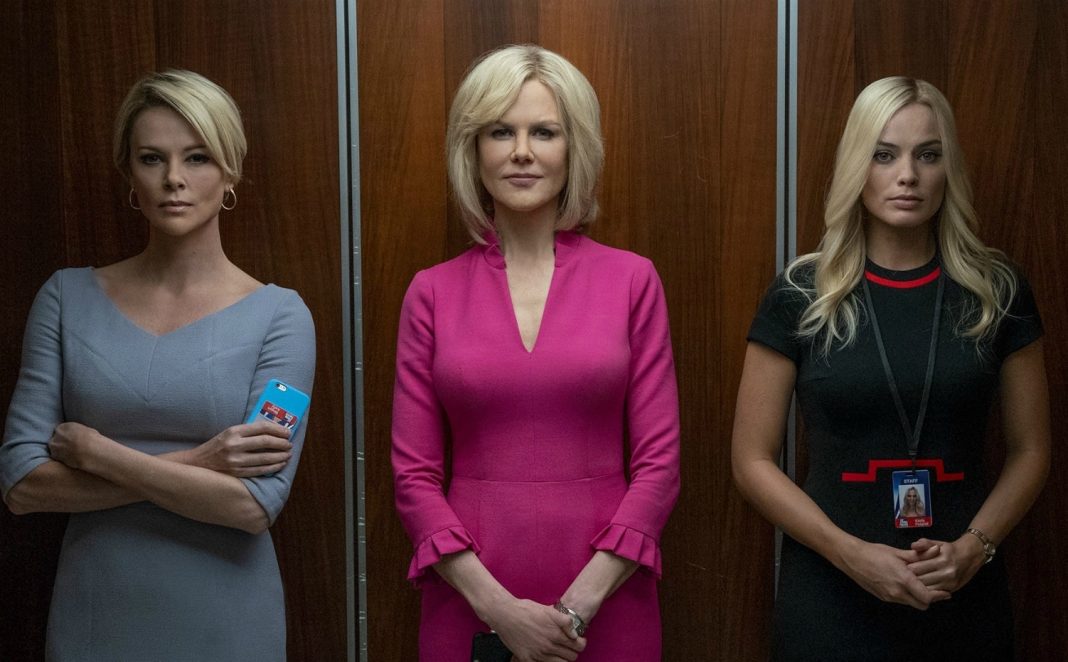 Building on the buzz from Sunday’s special screening of Bombshell at the Pacific Design Center in West Hollywood, Lionsgate has just released its first full-length trailer, and it looks like the big names at Fox News won’t be having a merry Christmas when the film comes out on December 20.

The story of late Fox chief Roger Ailes’s downfall amidst a flurry of sexual misconduct allegations starting with fired anchor Gretchen Carlson (Nicole Kidman) paints the network in a furious light, and already has some people talking Oscar consideration.

“You have to adopt the mentality of an Irish street cop,” Kate McKinnon’s character tells Morgot Robbie’s Kayla, a fictional producer hoping to get in front of the cameras. “The world is a bad place. People are lazy morons. Minorities are criminals. Sex is sick but interesting.”

When Charlize Theron’s Megyn Kelly sees Trump on national TV saying, “There was blood coming out of her…wherever,” she asks, “Did he just accuse me of anger menstruating?”

The darkest part of the story is hinted at when John Lithgow’s Jabba-esque Ailes tells Kayla, “I can pluck you out and move you to the front of the line, but I need to know you’re loyal. I need you to find a way to prove it.”

Although legal pundit Jeanine Pirro (Alanna Ubach)—who’s seen handing out “TEAM ROGER” T-shirts in the trailer—and other Fox regulars might not like their depictions, the film has Carlson’s full support, though her $20 million settlement with Fox keeps her from saying much about her own experience.

“It’s a strange and frustrating reality that I can’t partake in any of these projects based on my settlement,” she told Entertainment Weekly, “which is why I’m working so hard on Capitol Hill so that nobody else has to be handcuffed anymore. And I’m trying to pass the bill to take the muzzle off of women who face harassment in the workplace so that they’re not forced into signing NDAs and have to go to the secret chamber of arbitration where nobody ever knows what the hell happened to them.”

Carlson says the most important thing to her about projects like Bombshell and Showtime’s Fox-based miniseries The Loudest Voice in the Room is that they are “continuing the dialogue.”

The movie is already starting a conversation, that’s for sure…

Hard to tell from a trailer so I'm not saying it won't but: I really hope Bombshell acknowledges all the women at the center of that story are also actively harmful white supremacists spreading some of the most hateful rhetoric out there.

Fox News Projected Biden Will Win Arizona. Trump and Co. Didn’t Like It